If a week begins with Stanley Kubrick, it can’t be all bad: Matt started the Criterion Corner, a new feature exploring his Criterion back catalogue, starting with Kubrick’s The Killing. Again, not a bad start for anything.

END_OF_DOCUMENT_TOKEN_TO_BE_REPLACED

There are a number of companies that still deliver great physical media for films – Arrow Films and Kino Lorber come to mind, for instance, companies that care about curation and quality. Here at A Damn Fine Cup of Culture, we’ve obviously entered the 21st century and we stream films and TV series, but we nonetheless like a good Blu-ray edition or boxset, and few do this as nicely as Criterion. Late this week, Matt announced a new feature that will have him working off his Criterion backlog – which should start next week with a Kubrick classic. So, while it’s not quite a trailer, here goes…

END_OF_DOCUMENT_TOKEN_TO_BE_REPLACED

Are we post-wave, pre-wave or both? Sometimes it’s difficult to imagine a future without the pandemic, and everything – including the culture we watch, read, listen to and play – is tinted, not to say tainted, by COVID-19. On Thursday, Matt tried to put his thoughts on the whole Groundhog Day-ness of it all into words. And mention Dune yet again. Obviously

END_OF_DOCUMENT_TOKEN_TO_BE_REPLACED

Matt may not be as big a fan of Anthony Hopkins as many people, but he definitely liked The Father a lot, a film that’s worth seeing for more than just its acting. Check out his thoughts on Florian Zeller’s adaptation of his own play, Le pêre.

END_OF_DOCUMENT_TOKEN_TO_BE_REPLACED

Sometimes they come back: since our last episode, where we discussed black and white movie psychopaths, couldn’t contain all the cinematic psychoses, we’re dedicating a second episode to our favourite psycho killers. Starting from the question what we consider the archetypical pop culture psychopaths, our three intrepid pop culture baristas embark on a journey, beginning with the capo of New Jersey from HBO’s The Sopranos. Is Tony Soprano a narcissistic psychopath or does he really care about those ducks? We then move on to ’60s and ’70s San Francisco and gaze into the absence at the centre of David Fincher’s Zodiac, before the episode finally ends on American Psycho and the dark, cold, empty heart of Wall Street psychopathy.

If you haven’t already done so, make sure to check out episode 24, where we talked about movie psychopaths and psychopath movies, from Night of the Hunter via Fritz Lang’s M to the psycho granddaddy of them all: Norman Bates and Alfred Hitchcock’s Psycho.

END_OF_DOCUMENT_TOKEN_TO_BE_REPLACED

In this month’s podcast, we look back at TV series before the so-called Golden Age of Television and what has happened since – what we’ve gained and what we’ve lost in times of HBO, prestige television and binge watching. Are series the novels of the 21st century or is it all sexposition, soap operatics and narratives dragged out way past their sell-by date? Featuring our theme tune, “Mystery Street Jazz” by Håkan Eriksson (make sure to listen to the very end of the podcast)… and a very special appearance by Trillian the Cat!

END_OF_DOCUMENT_TOKEN_TO_BE_REPLACED

I was hypnotized by The Night Of for five or six episodes, which isn’t bad at all considering that it’s an eight-part HBO miniseries. To me, it seemed to scratch the itch that season 2 of True Detective left me with. It’s on the dark side of things: it mostly takes place at night and/or indoors, but even the exterior daylight scenes look sort of gloomy. It’s about crime and punishment, and about the law, about justice and injustice, and about courts and prison. It’s set in New York, but is based on the British TV series Criminal Justice from 2008-09, starring Ben Whishaw. The Night Of, however, has no problem standing on its own. END_OF_DOCUMENT_TOKEN_TO_BE_REPLACED

Last week we went to see the latest of the new Star Trek films, the one whose title is certain to trigger a Pavlovian response in any fan of the English ska band Madness. I’d greatly enjoyed the first of the reboot movies back in 2009, though Star Trek Into Darkness hadn’t done much for me, but I hadn’t given up on the franchise yet. Star Trek Beyond, though… It’s a competent enough film in some ways, the main cast is still the best reason to watch the reboot – but I simply didn’t feel it. Most of the time it wasn’t the plot that kept me engaged; instead I found myself distracted, not least by remembering the recent death of Anton Yelchin and thinking, wistfully, that he should have had his final appearance as Pavel Chekov in a better film.

END_OF_DOCUMENT_TOKEN_TO_BE_REPLACED

Let’s say I was given a choice: either I give up all the movies in my collection or I say goodbye to all the box sets I’ve got. Which do I let go of? The Criterion disks I’ve amassed since I first discovered the Collection would make this a difficult choice, but in the end I think I would want to hang on to the series I’ve got. The thought of not having constant and (nearly) instant access to Six Feet Under, Deadwood, The Wire, The Sopranos, as well as some of the later additions such as Treme or Hannibal is arguably worse than suddenly being bereft of the many, many films filling the shelves of the many, many Billy bookcases that we have accrued.

END_OF_DOCUMENT_TOKEN_TO_BE_REPLACED

I understand that the following might get me defenestrated, decapitated, poisoned, disembowelled and/or otherwise treated harshly – but I think that Game of Thrones is overrated. Don’t get me wrong: it’s a great series with a cast that well night perfect, characters that are engaging, production values that are amazing, complex storylines that are riveting and setpieces that are stunning. It’s head (not Ned’s, obviously) and shoulders above a lot of TV. Nevertheless, on a list of favourite series it wouldn’t make it into my Top 5: I’d take The Sopranos, Deadwood, Six Feet Under, Breaking Bad and The Wire over it any day, to name just a few.

Thing is, for all its strengths the series is pretty much entirely about itself. It has little to say about our world. I’m not denying the series all relevance, but for all the cruelty and political intrigue of the world it depicts it is still escapism. Does it need to be anything more? Most emphatically not – but it makes the superlative praise the series gets ring somewhat hollow. 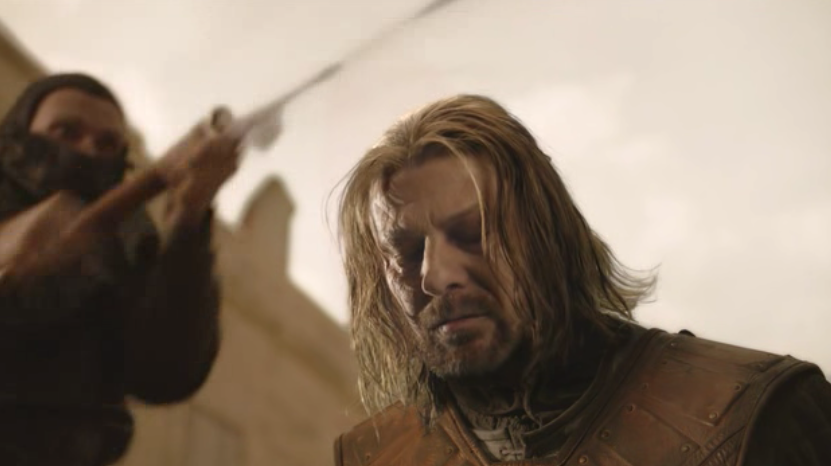 My impression is that because the series is brutal, because it kills our darlings, people implicitly see it as something more than escapist entertainment. “This is what the world is really like – cruel, amoral and swift to kick you in the privates, steal your silver and stab you in the spleen!” Except I doubt that most of its fans live in a world in any real sense that is like Westeros. Does Game of Thrones have anything much to say about power, responsibility, pragmatism and honour in a world of shifting alliances and uncertain motives? It probably does, although not all that much beyond what makes an intriguing story. Then again, it doesn’t need to – but its fans sometimes behave as if the series is completely new and does things that haven’t been tried before.

What puzzles me most is how Game of Thrones is almost universally hailed, yet HBO’s earlier series Rome barely made it to the end of season 2. In so many ways, Rome is an amazingly close precursor to the sprawling Westerosiad. Sex and violence? Check. Political intrigue? Check. Exotic locales? Check. Moral ambiguity? Check. Ciarán Hinds, Indira Varma, Tobias Menzies? Check, check and check again. (We’re still waiting for Ray Stevenson to make it to Westeros and for Kevin McKidd to be saved from his Seattle day job by a crazed, bomb-wielding, suicidal plane crash-cum-zombie apocalypse.) In terms of format, tone, characters, visual identity and, obviously, Nipple Count (and no, that’s not a character on the X-rated Sesame Street spin-off), the two series are very similar. Certainly, there are no ice zombies and dragons in Rome, but is that what makes Game of Thrones a success whereas the earlier series floundered? When people praise the series’ complexity, its characters and the world it evokes, are they actually saying that dragons, ice wights and boobs are cool? Or was the world not yet ready for a series of this kind when Rome was first aired? 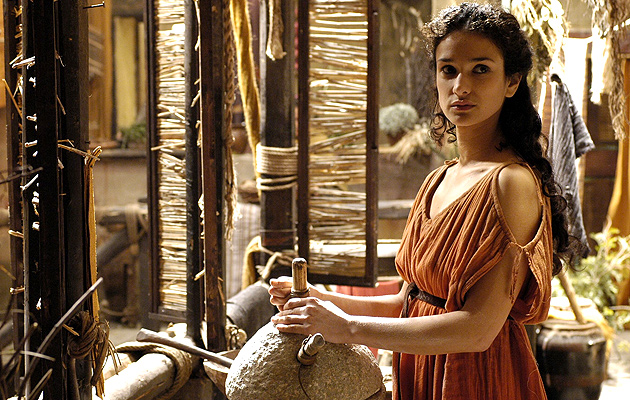 There’s something about about the way the internet has embraced Game of Thrones that recalls self-perpetuating feedback loops. People don’t just get excited about the latest episode, they get excited about the latest round of YouTube videos depicting fan reactions. Watch total strangers scream at their TVs as Prince Fringfrang of House Shmoodle gets his arms torn clean off! Controversial scenes? Check out the clickbait: Why women like The Walking Dead better than Game of Thrones! (Not a joke, that one…). There’s something performative to the fan hype, as if people think they’ll become more interesting if they’ve got a video of themselves shrieking at Ned Stark’s decapitation or if they’ve got a blog post about what people on the internet say about-

Okay, gotcha. I’m feeding on, and into, the hype machine as much as everyone else. And who am I to tell the internet that it’s overrating its latest darling, especially if I then go and wax gastronomical about Hannibal after posting my own clickbait? So, to close this meandering post: if any fans of Game of Thrones are still reading this, I’m not telling you to stop enjoying the show or talk about it. But if you get bored waiting nine months for season 5, do check out Rome, especially season 1. You might enjoy it. And you won’t have to worry about book readers spoiling next episode… just pesky historians. Just don’t enter “does caesar” into the Google search window, lest the auto-complete function ruins it for you.