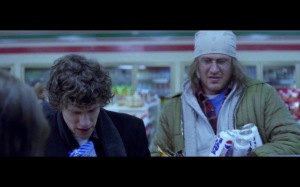 Against some pretty serious odds, I very much love James Ponsoldt’s The End of the Tour. I didn’t think too much of Jason Segel before. I sort of liked him in the goofy Jeff Who Lives at Home, but he was slightly too neurotic for me in How I Met Your Mother (yes, I know, neurotic behavior was that show’s trademark). Jesse Eisenberg is always watchable, even if he has to play uptight, angsty mid-twens most of the time.

Surprisingly, both actors escape from their previous roles and manage to convince me that they’re on to something else, at least for this flick. Segel slips effortlessly into embodying David Foster Wallace; it only took me a few seconds to forget that it was Segel playing the role. Eisenberg plays David Lipsky, the Rolling Stone journalist who wanted to be the first to write an RS interview with a writer. I would say  that he chose the right one.

The movie is not a biopic: it covers a few days, maybe a week, after the publication of DFW’s momentous 1000-page supernovel Infinite Jest in 1996.  You don’t have to know the novel or the man himself in order to follow the plot. DFW is the new wunderkind of American literature, although he hated that kind of adulation, being utterly content with teaching creative writing classes and being on a book tour. Lipsky accompanied him, cigarettes and tape recorder at the ready.

The angle of the movie is being and wanting, or not wanting, a celebrity. Foster Wallace wanted to become a better writer; Lipsky, a novelist himself, was in awe of Foster Wallace, so much so that he wanted to be him. More on the surface, Foster Wallace wants a good conversation, Lipsky wants a great interview. There are moments where they seem to enjoy each other’s company, until Lipsky drops a question about Foster Wallace’s heroin addiction or his time in a psychiatric ward. There is a kind of tender disappointment in Segel’s performance whenever Lipsky goes too far. Lipsky, on the other hand, quietly despairs about DFW’s off-hand discursive powers: “This piece would be so much better if it was just you. Just keep talking, you’ll save me a lot of trouble.”

Ponsoldt uses the concept of having no choice in being a celebrity in a clever way: The two women DFW and Lipsky meet at a reading, Julie and Betsy, are played by Mamie Gummer, the daughter of Meryl Streep, and Mickey Sumner, the daughter of Sting. Lipsky, as a journalist, should know that being famous is not all that it’s cranked up to be, but to him, there is the aura of genius around DFW, even if that genius is a loner and untidy and wears slacker clothes and a bandana covering his unruly hair. Ponsoldt has made the intelligent teenage drama The Spectacular Now, based on the John Green novel. He is one director to keep in mind.

The End of the Tour inveigled me into thinking that I had the next best thing to the real DFW on the screen in front of me, a kind of previously unaired footage. Segel sort of looks like Foster Wallace, and, hell, sometimes he even sounds like him, at least to me. Other reviews state the opposite. There are scenes that could work as an audiobook or a podcast. For a movie that is essentially about two talking heads, it’s interesting to listen to, and to look at. I admit I’m a fan of Infinite Jest, and the movie delivers something, maybe smart entertainment, about its author, but even if you don’t know anything about him, there is something there in the movie and in Segel’s performance, and we understand Lipsky and his fascination well enough.