Hoo boy! This was a busy week here at A Damn Fine Cup of Culture, starting with Matt’s post on the mildly absurdist Greek dramedy (such a bad word for such a wide range of stories!) Apples. He wasn’t entirely won over by it, but there’s still a lot to enjoy here.

END_OF_DOCUMENT_TOKEN_TO_BE_REPLACED

It all began when she walked into our coffee bar… It’s September, but really, we’re starting Noirvember early: join Alan, Julie and Matt as they discuss what some have called that most cynical of genres, the film noir. Obviously, there’s no way around the big granddaddy of them all, Billy Wilder’s blackest, bleakest of jokes, Double Indemnity (1944), or indeed Roman Polanski’s magisterial, tragic Chinatown (1974), each of these iconic examples of the genre – which, arguably, didn’t even exist yet when Wilder made his film. From classic noir to neo-noir, we finally take a trip to a Californian high school to check out Rian Johnson’s Brick (2004) as an example of postmodern noir, before we finish on a discussion of the future of the genre. Do we need any more compromised private eyes and femmes fatales – and, if so, what would they look like for the 21st century?

END_OF_DOCUMENT_TOKEN_TO_BE_REPLACED

I must have seen All About Eve at least half a dozen times so far. Its writing retains the sharp wit it had when I first saw it, its performances still shine: Bette Davis is perfect as Margo Channing and delivers Joseph L. Mankiewicz’ lines with relish, but the rest of the ensemble, just as central to the success of the film, is also top-notch. As a piece of filmmaking, All About Eve may not be as audacious as its contemporary Sunset Boulevard, Billy Wilder’s 1950 caustic tale of an ageing actress, but its appeal has not diminished. I had the opportunity to see it again a few days ago – while cinemas are open again in these parts, you’re more likely to find them showing older films rather than new releases – and it remains a delight.

It has taken me these half a dozen viewings, however, to come to the realisation that All About Eve shares some striking similarities to Patricia Highsmith’s thriller The Talented Mr Ripley (and, to a lesser extent, the film versions made of Highsmith’s novel) and that the title characters of the two works can be seen as mirror images of each other.

END_OF_DOCUMENT_TOKEN_TO_BE_REPLACED

As someone once said, there’s two kinds of people in this world, Elvis people and Beatles people. I know which side of that particular divide I’m on, but I sometimes get the impression there’s a similar divide among some movie critics and fans. Which of the two eviscerations of aging actresses is your favourite: Billy Wilder’s genre-busting, darkly comic Sunset Boulevard, arguably one of the director’s best films, or the sharp, witty, but stylistically relatively tame All About Eve by Joseph L. Mankiewicz?

END_OF_DOCUMENT_TOKEN_TO_BE_REPLACED

After spending much of our summer looking into the abyss with our two episodes on cinematic psychopaths, A Damn Fine Cup of Culture is heading for British Hong Kong, 1962: we’ve rewatched Wong Kar-wai’s In the Mood for Love (2000) and we’ve got some things to say about it, from commenting on the echoes to Billy Wilder’s The Apartment to discussing the film’s sartorial choices. On our way there, we also touch upon the Elton John biopic Rocketman, the Nazi-shootin’ B-movie thrills of Wolfenstein: The New Colossus and the grandpappy of silent Soviet cinema, Battleship Potemkin… set to a live orchestra’s renditions of Shostakovich. How better to finish a summer of culture?

END_OF_DOCUMENT_TOKEN_TO_BE_REPLACED

I was originally going to write about Michael Haneke’s Amour here, a film that I wouldn’t hesitate to call one of the best I’ve seen this year, but I think I may need to think a bit more about Haneke’s latest and how I feel about it. So, to play for time and keep my fingers warm in the meantime, here’s a Variety Pack to go with the bookbag I posted recently.

I wouldn’t say I’m an expert on Billy Wilder by any means, but I definitely appreciate the man’s work – although if there is something to that deleted scene from Pulp Fiction, if there are Some Like It Hot people and The Apartment people, I belong firmly in the latter group. There are a number of Wilder films I’ve never seen, though, in spite of hearing a lot about them, one being his DDR comedy (that oldest of genre chestnuts!) One, Two, Three, the other Stalag 17. (Perhaps it’s a case of The Great Escape having taken up the slot of POW camp film in the DVD collection in my heart.) However, while One, Two, Three still remains unseen by me, I’ve now filled in that other gap in my Wilderography. 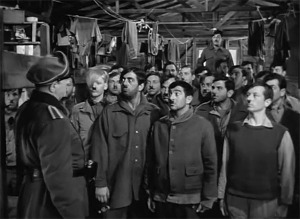 The film’s an odd one, especially in terms of tone. Wilder often mixed comedy and drama, and to great effect – The Apartment is sweet and funny, but one of its central plot points is a suicide attempt, and Some Like It Hot begins with a Valentine’s Day Massacre-inspired scene that gets the film’s story started. Similarly, Stalag 17 begins with a doomed escape attempt that sees two American prisoners of war shot by the German camp guards – but differently from several other films by the director, I don’t think this one is as successful at blending different tones. It’s especially the characters, several of which are too broadly drawn and too cartoony to evoke much empathy, something that distinguishes the Wilder films I like best. Yes, they’re cynical, and yes, they use moments of slapstick and broad comedy, but the characters are usually still human, even the most excessive ones such as Norma Desmond. There are a handful of such characters in Stalag 17, but the film spends most (and, in my view, too much) of its time with the clownish comic relief characters, to the extent where it feels more like the meat of the plot is the dramatic relief from POW clownery. William Holden is great, both his character and the acting, and there are some beautiful, witty scenes (one involving more Hitler moustaches than you can shave your whiskers at), but the writing on the whole is uneven, making the film feel like lesser Wilder to me. But then, as mentioned, perhaps that’s just because the place in my heart reserved for POW camp movies was taken decades ago by The Great Escape.

For being a film nerd with a certified diagnosis of Criterion Addiction Syndrome, there are a number of notable gaps in my library, such as Pasolini… and Buñuel. I’m not 100% certain, but I think I’ve even avoided Un Chien Andalou, although it is just about possible that I saw it when I was an insomniac teenager and they were showing it on some forlorn TV channel at 2am and I’ve been repressing the memory ever since.

So, when Criterion brought out Belle de Jour on Blu-ray, I pounced. A satire of the bourgeoisie, repressed sexual fantasies coming to life, Catherine Deneuve… what’s not to like? 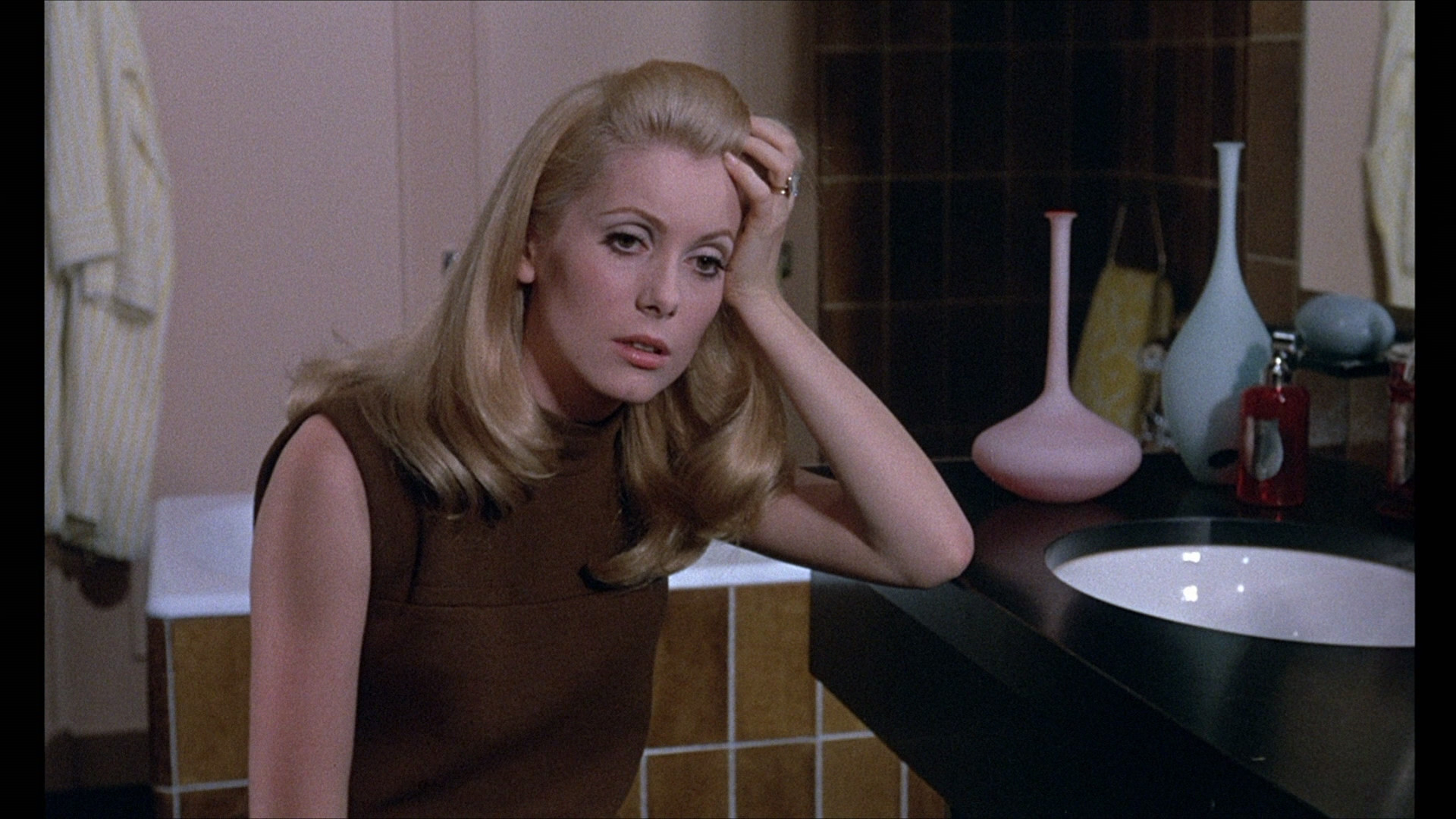 One Blu-ray later, colour me disappointed. The film is interesting, it’s well shot, it’s got actors that are worth watching – but why oh why does it feel so tame? Why do Deneuve’s character and her sexual explorations seem so trite? I expected a film with the power to shock, but apart from being moderately intriguing Belle de Jour didn’t shock me – nor was I sure it was trying to. If the film’s satire intends to make fun of even the most repressed sexual fantasies of bourgeois housewives being fairly banal, it succeeded – perhaps you need to be a member of the ’70s bourgeoisie to be shocked by the film.

It’s still an interesting work and has some effectively surreal moments, not least in the dreams that the protagonist has, whose weirdness is amplified by their deadpan presentation. But trés choquant? Pas vraiment.

How’s this for bookending this blog post: Otto Preminger plays the camp Kommandant (ooh-er, missus!) in Stalag 17 and he directed the third movie in this variety pack. It’s almost like I have a plan here! (Briefly ponders renaming this blog “Cylons on Pogo Sticks”…)

Bonjour Tristesse is an odd duck in one particular way: all the characters are supposed to be French, yet the main characters, the aging Lothario dad and his precocious teen daughter, are played by Brit David Niven and American Jean Seberg, neither of which sounds in the least French – though the French people surrounding them for the most part have French accents. What is strange, though, is that after the initial irritation this works fairly well: the two characters are so much in a world of their own creation, in which they are somehow the only real people… or, by the end of the film, the only ones as thin and flimsy as paper. 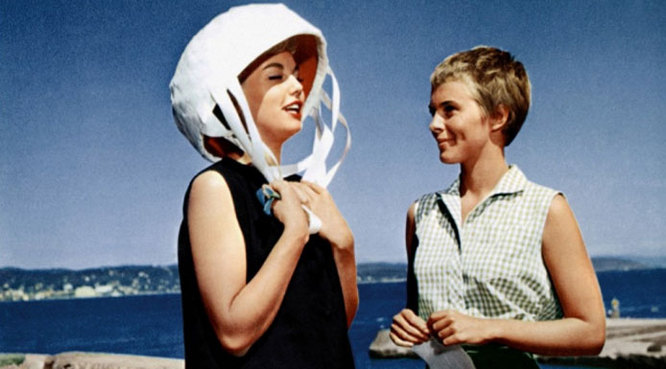 Perhaps it’s because this is an American film and doesn’t come with the same sort of baggage as Buñuel’s Belle de Jour, but I found Bonjour Tristesse more, well, not shocking so much as simply able to make me think, feel and have some sort of reaction beyond being mildly intrigued by its treatment of sexual themes, even though the film is much more overtly tame. It also manages a fairly difficult trick, namely making the audience care about selfish, callow characters who use others unthinkingly and whose charm is shown to be increasingly threadbare.

Another effect the film had on me: I now want to rewatch A Bout de Souffle, Goddard’s turn at being infatuated with Seberg. I didn’t particularly like Goddard’s film when I first watched it, but he said himself that A Bout de Souffle can be seen as a quasi-sequel to Bonjour Tristesse. Perhaps the earlier film will make me appreciate the later one more by tickling my intertextual taste buds! If it does, I’ll make sure to let you know.