The man doesn’t talk much. Mostly he smokes his cigarette and looks out over the untamed land. He’s come as part of a group planning to harness nature, to bring electricity and industry to these apparent outskirts of civilisation – one of several men who never question their right to be where they are and take what they want – yet he stands apart from them. They are not his tribe. He rides a horse into the small town where the natives eye him, not quite knowing what to make of the man. They don’t share his language and he doesn’t understand theirs, but that’s unimportant. Perhaps it’s even the point. The frontier feels like home to him.

It is 2017. The frontier is the Bulgarian-Greek border, and the man is one of several German construction workers employed to build a hydroelectric power station. The film is called Western – a surprisingly apt description for a surprising movie. 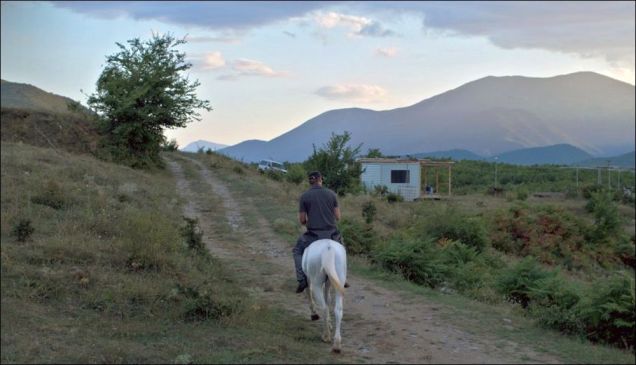 Even without the major hint of the film’s title, it’d be difficult to watch Western without thinking that there’s a heavy streak of ‘70s Clint Eastwood in its protagonist Meinhard. As written and directed by Valeska Grisebach and played by lay actor Meinhard Neumann, he is not a man who feels at ease around his chattering colleagues. He’s probably the most morally upstanding of the workers, though none of them are evil; they’re mainly just trying to make a living and most of them behave like they own the place because they think that’s what men are supposed to be like. (It is telling that one of Meinhard’s co-workers, a middle-aged man, observes the others acting out their laddish impulses and says wryly, “It’s a blessing when you reach 40 and your testosterone diminishes.”) The foreman is probably the worst of them, a sexist bully who doesn’t think twice of rerouting the nearby village’s water because his building site needs the water, but even he is not a bad man so much as a careless, casually selfish one, differing from the others by degree rather than kind. 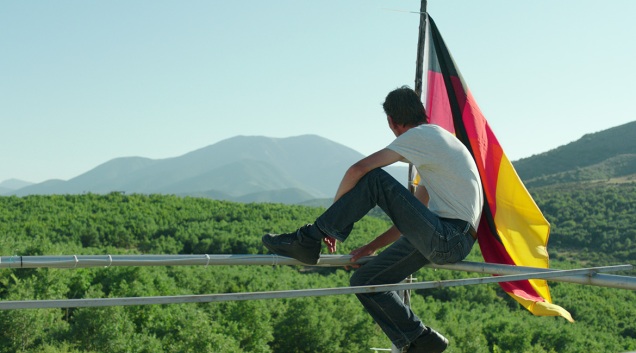 Meinhard, meanwhile, seems different. He is the only one who shows an interest in the Bulgarian villagers and something like respect; he quickly seems more at home with these people he barely understands. Over time, though, we get to understand that there is more than a hint of the same impulses in him: when he comes upon a horse on his solitary wanderings, he simply claims it for himself. Once Meinhard has made a claim to something, to anything, he considers its his: not just the horse but this new tribe he has chosen, and if necessary, he will protect his claim by all means necessary. There is a constant undercurrent of violence just waiting to erupt, not just between the villagers and the construction workers who give lip service to doing their work, but between Meinhard and the world, a sense that he will make himself a part of this place and these people whether they accept him or not.

Grisebach’s film sets up various story strands that all point towards one kind of escalation or other; Meinhard’s co-workers begin to resent this man who seems to have chosen his side and it isn’t theirs, and the Bulgarian village turns out to be less of an idyll than Meinhard recognises. It is a place that is slowly dying, because there is no water but also because of corruption and because the young keep leaving. There is no future for this place, which may be what draws our protagonist to it: it’s a place of the past and of the mind, a seemingly untouched frontier where a man can imagine himself in the mould of the Man with No Name. 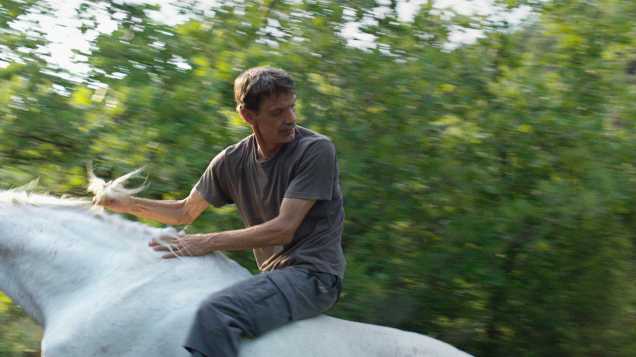 In the end, the waited-for escalation never happens – no one dies, no one kills anyone else. Meinhard does receive a beating, but not by his colleagues; it is some of the villagers at an open-air party who show the man that he doesn’t just become one of theirs and stake a claim to them by wandering into their midst. Perhaps he will belong someday, but belonging isn’t something that you just take. Yet while he is humbled, realising that no one here has been waiting for him, he doesn’t give up: and in the film’s final, unexpected scene, this present-day cowboy, this example of old-school masculinity, solid and taciturn, doesn’t ride off into the sunset. He slowly rejoins the group that has just shown him a mix of resentment and indifference and is now dancing raucously – and shyly at first, clumsily, almost in spite of himself: the man begins to dance.