Roughly halfway through the first episode of American Gods, the TV adaptation of Neil Gaiman’s novel, its protagonist Shadow finds a large, bearded Irish American calling himself Mad Sweeney getting right in his face. The self-described leprechaun keeps goading Shadow, newly released from jail and trying to keep out of trouble. Finally, Mad Sweeney finds the right button to press – and gets exactly what he wanted: a fist in the face and a shit-kicking bar fight.

Afterwards, as the screen cut to black, my wife turns to me and says, “Now that is how you do a fight scene.” 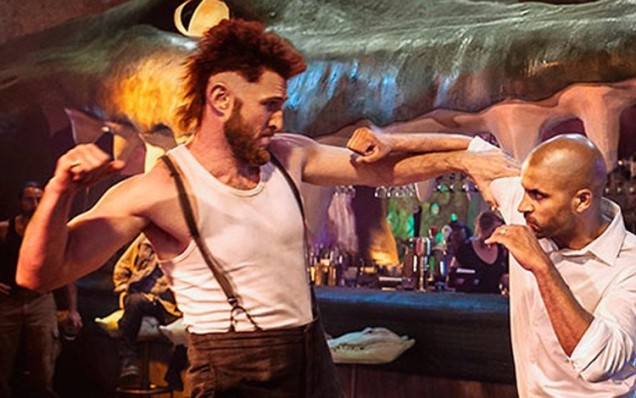 I fully agree with her – even I have to admit that fight scenes are rarely what I watch films and TV series for. Sure, I enjoy a good action film, whether it’s the messy ’80s charisma of Die Hard, the pop-operatic grandeur of Kill Bill or the balletic-ballistic efficiency of John Wick, but it’s rare that I actively yearn for more fights.

It’s worse when it comes to TV series. After having watched Buffy, Angel and most of Netflix’ Marvel series, I tend to look at TV fights as “that bit you have to get through to get to the funny/exciting/engaging part”. Buffy at least had quips and banter, but Angel‘s fights were largely po-faced mediocrities that would have me checking my watch. You’ d expect the Netflix series to do better, not least because of a larger budget – but apart from one or two fights in Daredevil (I’m thinking especially of the one-take hallway battle in the first season, though that one was mainly good because the director had obviously watched Oldboy and learned the right lesson) they simply didn’t have very good fights.

I’m sure that experts on filmic fisticuffs will be able to tell me in more detail what the Marvel TV series do right and wrong in terms of their fight scenes, but to my mind it’s two things. For one, the fights have little to no personality. Daredevil‘s second season was bad enough with its many battles against faceless ninjas. (TV Tropes’ Conservation of Ninjutsu comes to mind.) I don’t remember all that many such scenes in Jessica Jones, though that may be either because that series’ main conflict couldn’t be resolved by exchanging blows or because the fights were simply not all that memorable – though there is one late in the scene that pits Jessica against her friend, Luke Cage, so there are at least real personal stakes. Luke Cage itself suffered from its main character’s relatively uninteresting set of powers and a dreadful second-act villain, and Iron Fist was saddled with a protagonist who is to charisma what Hannibal Lecter is to vegan cuisine.

The second thing is probably a subset of the first: so many TV fights, and definitely the majority of those in the Marvel series, are deadly serious – but they’re also samey in their seriousness. The stakes are usually big, but they’re also generic. There’s rarely a twinkle there, there’s no sense of fun – and if you have a series that mostly resolves its conflicts through fighting, you’d better make those fights enjoyable to watch. If the Iron Fist doesn’t get a kick out of kicking ass, why should we? It’s no coincidence that one of the only fights in Iron Fist that is at least somewhat enjoyable pits Danny Rand against a drunk, goofy, irreverent opponent that briefly made me wish the series was about him instead. (Apparently the actor, Lewis Tan, auditioned for the lead part, and chances are he would’ve improved the series considerably, even if the scripts would’ve still been dodgy.)

Not every fight scene has to be fun, and you can make a compelling battle that is altogether serious – but if you’re spending a considerable part of your film or series having characters beating each other up, make it interesting. Make it meaningful. Give it personality. Fights shouldn’t feel like an obligation and nothing more. They should express something about the people fighting, and if I’m not interested in them – or at the very least in one of them – I don’t much care about who gets a bloody nose and who walks out of that ring.

I’m not hoping that American Gods will feature fist fights every episode, but neither do I dread that possibility, because the Mad Sweeney bar fight had energy and it was fun. One of the things the Marvel series could very much learn from it is that if a series whose bread and butter isn’t the biff!, bang! and zow! of fisticuffs does better at battle than a series that is about super-powered good guys and villains facing off against each other, well, you’re going to get your ass kicked. 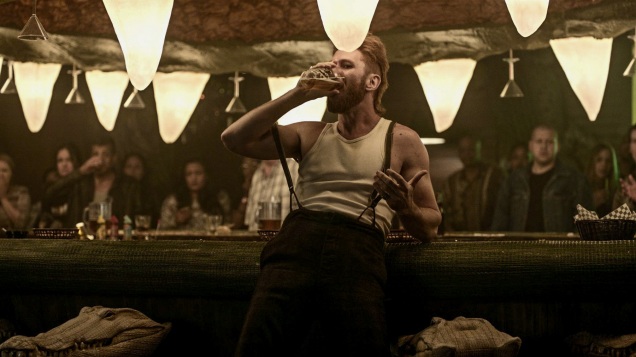