In the past, They Create Worlds has mostly featured games that create striking worlds for us to traverse and explore, worlds for the players to inhabit. Hellblade: Senua’s Sacrifice does this too, but it is more concerned with interior worlds, and it brings them to life with an intensity that I’ve not yet seen in games. 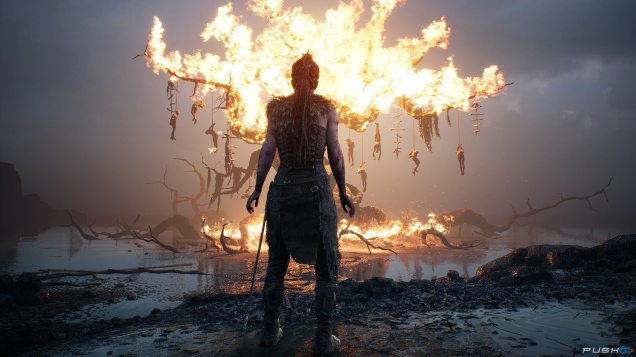 In spite of its utterly generic video game title, Hellblade is not a generic power fantasy. Its protagonist, Senua, is no Kratos or Master Chief, she is a young Pict woman who has been struggling with psychosis from an early age onwards. Games, especially those slanted towards horror, often try to depict insanity, but they tend towards the cartoonish in their depictions; Hellblade is more serious about the subject than you might expect from a game that has a Celtic warrior face up against the gods to save the soul of her dead lover Dillion – as is illustrated by the first person mentioned in its credits, the neuroscience professor Paul Fletcher who acted as the developers’ mental health adviser.

On the surface, Hellblade may not seem immediately different from any number of action adventures: Senua spends much of the game fighting half-human creatures and solving puzzles. A big difference is the game’s tone, though; the battles never feel triumphant nor is the violence the grindhouse titillation of a God of War. Instead, as Senua fights what appear to be emanations from her mind more than actual, physical monsters, she is harried relentlessly by voices in her head that pull her in different directions: some urge her on, others insist that she is failing, she can only fail, and it is all her fault. Outside battle, too, they are Senua’s constant companions, asking her where she is going and intimating that she is lost and will never find her way again. The game uses a technique called binaural audio, the result being spatial sound that is utterly convincing. Throughout the seven or eight hours of playing Hellblade, I kept looking over my shoulder because that’s where the reproachful hissing and the urgent pleadings were coming from. As a result, the game makes you feel like you’re never alone, that there’s constantly someone behind you, sometimes urging you on, then telling you that you’re lost and misguided the next moment – but you can never turn to face these voices. They don’t seem to be in your head but have a tangible presence that makes them feel real.

Strangely, the effect of this is that it undermines Senua’s own reality: the more the voices bear down on her, the less real she feels herself. If she can’t trust her senses, what is she beyond those senses? If the things you consider real are delusions, how can you know that you, your own perception of self, isn’t just as delusional? The ground underneath Senua’s feet, the reality she is never quite certain she inhabits, is unstable and shifting, there is nothing she can trust. It’s not rare that games attempt to destabilise the player’s world, but they usually do so in an overly literal way, with setpiece scenes that are more akin to the CGI orgies of superhero movies than anything more psychologically real. Hellblade also has moments where the bleak, barren landscape suddenly shifts into something more outlandish, but its means of destabilising the world of the protagonist are usually more internalised.

The biggest mistake Hellblade could have made, undoing all of its impressive work of giving the player a glimpse of how psychotics experience the world, would have been to make Senua’s quest about ‘solving’ her own psychosis, finding a miracle cure and making her psychologically whole in the end. This doesn’t happen. We learn about some of the things that helped bring about her current mental state – Hellblade is a story about emotional and mental trauma and it goes to some very dark places – but it doesn’t present psychosis as something that is defeated as one would defeat a video game boss. The voices, the self-doubt and fear, the way Senua’s mind is constantly being gnawed at, these do not go away. She makes a sort of peace with the death of Dillion, but the game never looks at psychosis as a quest but as an ongoing struggle. As someone who isn’t affected by mental illness of this kind, whether in myself or in friends or family members, I appreciate this glimpse the game provides into an inner world I hope to never inhabit for real.

October 10 is World Mental Health Day. Ninja Theory, the developers of Hellblade: Senua’s Sacrifice, will donate all proceeds they receive from the game today to the charity Rethink Mental Illness.

While Hellblade: Senua’s Sacrifice is one of the most visually gorgeous games I’ve ever played, it’s the sound design that is most memorable. To get an impression of Hellblade‘s use of binaural audio, check out this video by the developers. Please note that binaural audio only really works if you’re listening on stereo headphones; the effect is lessened, distorted or completely lost otherwise.

One thought on “They create worlds: Hellblade – Senua’s Sacrifice”