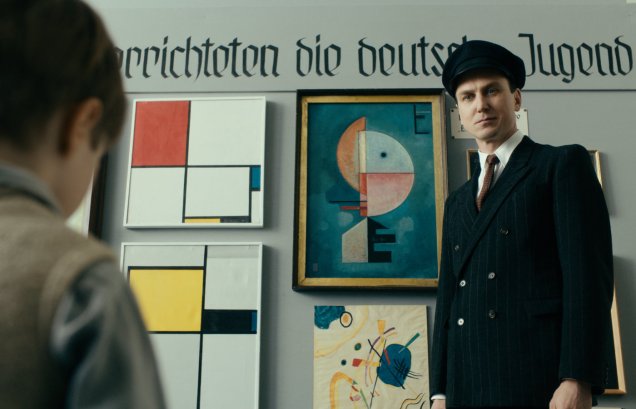 Reader, it’s not easy for me to describe why I like Never Look Away so much, so let me start with the title. The movie’s original title is Werk ohne Autor (Work without Author), which is much better, since it’s a movie about a fledgling painter who seems to see himself as a mere conduit for his paintings than an active artist. A title like Never Look Away suggests that it’s about the Holocaust, although that is not so wrong either. The movie was written and directed by Florian Henckel von Donnersmarck, who also wrote and shot The Lives of Others, an excellent movie, and the slightly disappointing The Tourist. Werk ohne Autor is loosely based on the life of German painter Gerhard Richter, who has seen the movie and disapproves of it.

The movie starts with a group of people on a guided tour through a German art gallery in the 1940s. The tour guide, played by Lars Eidinger, explains how it is vital for a nation to eradicate degenerated art and go for proper art with a political, edifying purpose. Two visitors catch our attention: these are a young boy called Kurt Barnert and his aunt Elisabeth. Both of them secretly like the so-called degenerated art much better than the state-approved paintings. On their way home, they stop at the bus depot, where Elisabeth asks all the drivers to keep honking their horns. She stands in front of those buses, surrounded by the sound, while her nephew looks on, and she later tells him that she wants to paint the way she feels while listening to those horns. It’s a moment that little Kurt will remember. 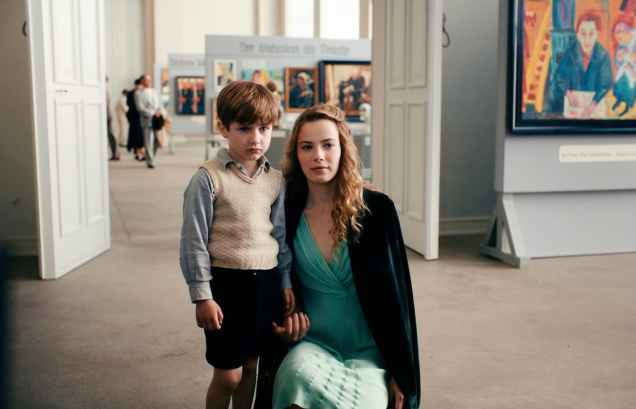 Elisabeth is also fond of playing the piano naked, which would be deemed eccentric anywhere and anytime else, but not in Nazi Germany. Her behaviour leads to a psychiatric assessment by Professor Carl Seeband, and it is here that I have to warn you that there might be SPOILERS AHEAD! Seeband is a high-ranking Nazi doctor and gets to decide who to treat and release and who to terminate. Elisabeth is one of the latter, and she dies in one of these unspeakably horrifying gas chambers. Elisabeth is played by Saskia Rosendahl, who played the lead in Lore (2012), a movie about the Holocaust. 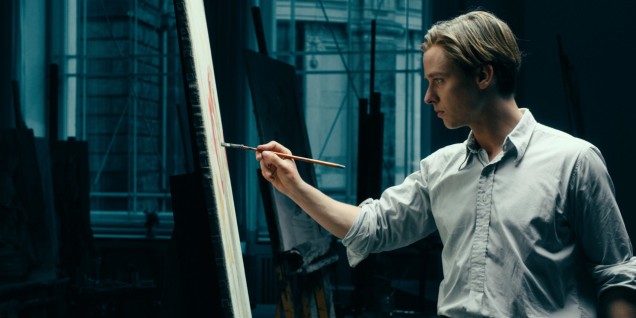 Kurt Barnert knows he wants to be a painter, in a time where painting is considered to be an art form on its way out, but he wants to stick to it, and enrols in art school in Düsseldorf, not a hotbed for artistic avant-garde. There is a girl called Ellie (Paula Beer) in the fashion department who is giving away free 2B pencils, which is just what Kurt needs, and he falls for her like she falls for him. Ellie, however, is the daughter of Professor Seeband. And it’s there that the question starts: when will Kurt or Ellie realise that it was Seeband sending Elisabeth to her death? When will Seeband realise the connection? The movie is so smart as to let the audience guess when exactly Seeband or Kurt make that conclusion. 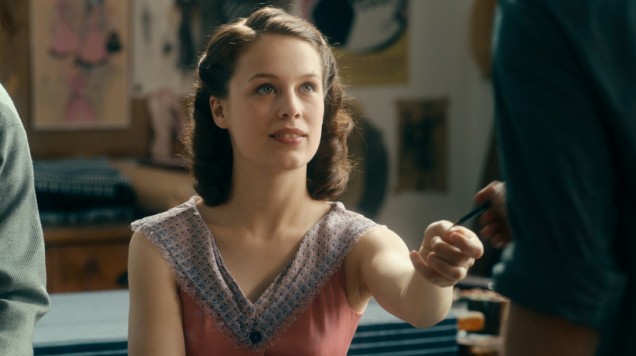 Professor Seeband is played by Sebastian Koch, who was already in The Lives of Others. Seeband is an excellent doctor with abysmal ethics; he has been incarcerated by the Soviet invaders, but gets into the commander’s good graces because he can tell that his wife’s birth will be a difficult one just by listening to her screams. He is allowed to assist the birth and might very well save the lives of mother and child. Because of that, he gets to live and to hide, effortlessly sliding from national socialism into communism, making a living either way. Seeband is a kind of dark horse: he is very, very good as a medic – he only needs to hold his daughter’s hands to realise that she is pregnant -, but he has horrifying opinions about someone’s ‘genetic material’. There is a moment where he tells Kurt (not Ellie) that she has an ectopic pregnancy and that an abortion is necessary, or Ellie will die. Think about it: he might be correct medically, but there is also the nightmarish possibility that he is using his eugenic convictions to lie and make his own daughter lose her healthy child because Kurt is not to his liking and the child an abomination in his eyes. Kurt, on the other hand, eventually learns that Seeband has a criminal Nazi past and might be brought to justice.

The answer to that conundrum as far as Kurt is concerned is art. I know that this might sound flimsy, but in that movie, it works. Kurt has to go through art school, led by Professor van Verten (Oliver Masucci, who in a strange twist of fate played Hitler in Look Who’s Back), a teacher clearly modeled on Joseph Beuys, who sets painting ablaze to prove a point. Kurt eventually will learn how to react to what he thinks Seeband has done to his marriage with Ellie. There are moments when he sits in front of an empty white canvas for days while his colleague next door is hammering countless nails into furniture for days on end, being endlessly productive. And then Kurt finds a way to get back at Seeband in his own artful way. 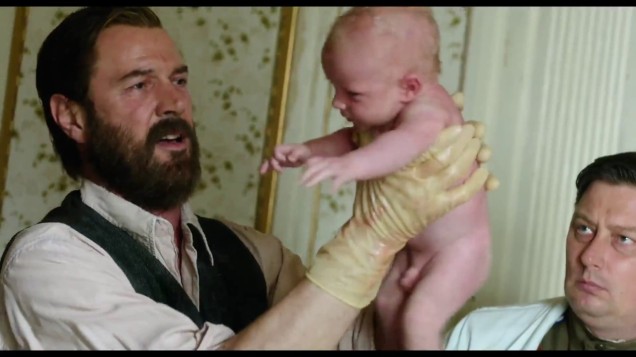 Yes, Werk ohne Autor has its problems. It’s three hours long and could be shorter, but I honestly don’t know which scenes should be cut. Kurt is played by Tom Schilling, and there seems to be precious little characterisation to go on. There is a moment where he jumps out of a tree and tells his father that he now understands everything, which is a bit of a movie cliché – assuming everything while understanding nothing. Ellie, despite all of her physical problems, is able to finally give birth. These are all minor complaints about a very good movie that feels shorter than it really is. The moment where Kurt realises what he wants to paint and in which way make it worth the wait. There is a cameo by Ben Becker as the factory foreman who derides Kurt’s work and then gives him a stipend for art school all the same. The three movies about artists I like best are Scorsese’s Life Lessons, Jacques Rivette’s La Belle Noiseuse, and this one.