It’s a comical image: the gigantic works of art, plastered on the side of buildings and in one case even a towering stack of shipping container, and looking at them, the tiny, old woman with her white-and-red hair who helped bring these gargantuan images about and document them on film… though while she may be tiny and old, she most definitely isn’t frail. In fact, she stands as tall as anyone and anything in the film.

Visages Villages (translated into English as Faces Places, neatly preserving the rhyme) has been called a documentary, but that is perhaps not the most apt description. It is a travelogue, a sometimes comedic, sometimes melancholy road movie, a voyage taken by a woman nearing the end of her creative career, her eyesight (Varda was suffering from a condition that turned her vision increasingly blurry), and indeed her life. The 88-year old Varda takes this voyage with the 33-year old artist JR, whose works mainly take the form of black and white photos, printed out in enormous format, pasted on the sides of buildings and constructions such as water towers and, memorably, a derelict WW2 bunker that has toppled off a cliffside and is now stuck askew in the sand, washed by the tides. 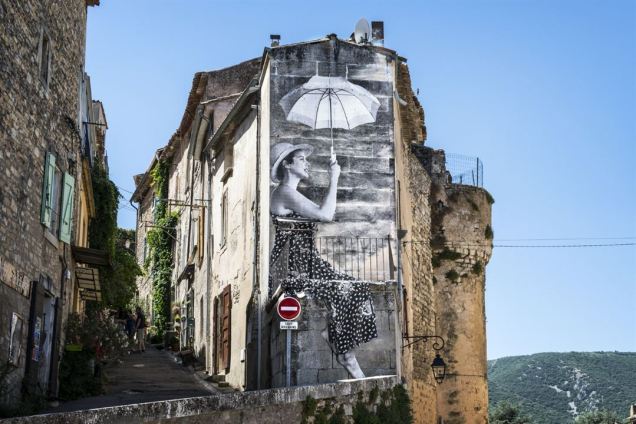 There’s a droll, if sometimes cranky, humour to 88-year old Varda and the way she looks at JR as he in turn looks at the world and the people around him. The film starts with the pair narrating various scenarios of how they didn’t meet: the two of them at the disco, failing to see the other cutting up the dance floor, each in their own little world, or Varda having stolen the last chocolate éclairs at the baker’s moments before JR barges in looking for just such a sweet, buttery snack. All of this could easily turn into the kind of twee that is just one step away from self-satisfied quirkiness, but there is both a deadpan quality and an earnestness to both artists that makes them kindred spirits even when they couldn’t be more different at a glance: Varda and JR mostly seem to have fun on their artistic Tour de France, and they both seem to have a sense of humour about themselves, but they are not cavalier about art itself.

Differently from the paintings of the Louvre that Varda and JR visit in a quick-as-a-flash homage to Jean-Luc Godard, much of the work that the two produce as they travel around France is democratic in concept, depicting the kind of people who don’t find themselves hung on the walls of the great European art galleries. Instead, the models that they find on the streets of small towns and villages could be anyone: they are workers from a nearby factory, they are waitresses at the café around the corner, they are the wives of dock workers and the fathers and grandfathers of the inhabitants of a former mining town. Blown up to enormous size and plastered on the sides of buildings, they are looked at, sometimes with apprehension, sometimes with joy, by the subjects themselves or by their families and descendants.

Then there are other motifs that Varda and JR pick: the fish they’d photographed at the market, or extreme close-ups of Varda’s eyes, or the picture of a young man who had posed for Varda decades ago, who’d become a photographer himself but who had died since. It’s that young man who ends up plastered on the side of the derelict German bunker – larger than life, but still so ephemeral that after the tide has been and gone there is no trace of him ever having been there. It is through such episodes that the theme of transience sneaks its way into Visages Villages: these faces are fleeting, as are our sight, our memories, and finally ourselves. However much we may think of art as something eternal, it isn’t. It is difficult to shake the impression that the film makes Varda’s mortality the third leading part, especially after her death on 29 March 2019 – and so, my first glimpse of Agnès Varda and her work was also one of the final glimpses of her ever. But in my mind, her eyes, blurry but no less curious for that, – and, whimsically, her toes as well – are still travelling the French railways, looking out at the world and the people in it.