Yes, once again I’m months behind the real world – but opinions that are full of themselves never go past their sell-by dates! Remember when everyone was talking about that final episode of Lost? Well, they’ve now shown it in Switzerland, so here I am, ready to put forward my opinion at a point when no one’s interested anymore.

A lot has happened since Lost began – and I’m not talking only in terms of polar bear attacks, electromagnetic incidents and casual time travel. Things in my life have changed in certain fairly fundamental ways, and some of my attachment to Lost comes from associating the series with some of these changes. I’ve mostly enjoyed the series, even at its most convoluted moments, in spite of getting annoyed as hell with characters such as Shannon, Boone or Charlie. (At least the series lost its knack of making these characters worthwhile only in time to kill them off.) I was even intrigued when the series stepped up its metaphysical Überbau by introducing the ancient fratricidal conflict between Jacob, the manipulative quasi-deity of the island who’d been ‘touching’ several of the Losties since they were children, and his smokin’ Cainesque brother, Dwight. (Okay, that’s not his name, but the writers were being just a tad too cute when they did their “I only came up with one name!” in-joke.)

When they introduced their flash sideways, with intriguing glimpses of a world where the Losties hadn’t become lost, where the island was at the bottom of the ocean, I was fascinated – at first, that is. I was curious: was this parallel existence the result of the bomb exploding at the end of season 5? Was it the world Smokey (sorry, make that Dwight) was trying to escape to – or was it a world in which he’d escaped the island and Jacob’s words about how this would destroy everything had proven so much, well, smoke and mirrors?

But then the writers fell back onto their old tricks: when in doubt, introduce new ambiguous antagonists (call them Yet Other Others), make the characters re-evaluate their allegiances and have your cast trek from one side of the island to the other. The problem with those tricks is mainly that of diminishing returns: do we care about yet another group of strange people who speak in riddles (the temple dudes or Widmore’s merry men and annoying woman)? Also, if we don’t know what either side in a cosmic conflict really is about, what does it matter whether Jack’s on one side or Sawyer’s on another? And yes, the island backgrop is nice to look at, but after six seasons even that has lost its initial charm.

In the end, this isn’t the major problem with season 6 and the series ending, though. Every season of Lost had its share of filler material that would have benefitted massively from tightening the story. The problem was this: the ending – in fact, both endings, the island storyline and the “is this heaven? – It’s Los Angeles.” metaphysics-for-the-21st-century one – rendered most of the six years irrelevant. The hatch, the numbers, the polar bears, the Others, the Dharma Initiative, Widmore, time travel, basically anything… It didn’t matter for either ending. And it’s no excuse to say, “It’s all about the characters, stupid!” – least of all if you’re writing a series that, week for week, was driven by the WTF?! question. What the fuck was that polar bear doing there? What the fuck is down that hatch? what the fuck is up with those numbers? Yes, you had nice flashbacks fleshing out the characters, but that doesn’t make the series about the characters – because, let’s be honest, would we have watched the series for six years if it hadn’t been for all the weird shit going down? Would we have sat through more than one Jack or Kate episode without them dangling the answer to some of our questions at least in front of our noses?

The series tried to make the finale not only big and loud (betrayals! fights to the death! Star Wars references!) but also meaningful in some ill-defined spiritual way, but the longer the season went on, the less it was able to answer the “So what?” question – in the end the only question that matters in entertainment. Obviously it’s an unfair question, because it can be asked of anything, and in the end no stories are necessary – but that’s where, as storytellers and entertainers, you have to keep the audience interested and distracted enough so they never feel like asking the question in the first place. 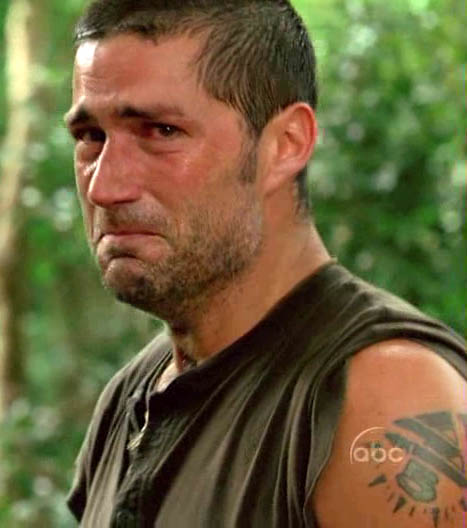 To be fair, the final episode had its share of emotional moments. I enjoyed it while I was watching it, and yes, I did feel moved by Sun and Jin’s moment of revelation at the hospital, or by Hurley’s realisation that the weight of Jacobhood was going to be placed on his shoulders. But with every new burst of flashback-revelation, with every montage of people falling in love, giving birth or staring down holes on the island, our old friend, Diminishing Returns (Dimi to his mates), struck – and by the end of it, what struck me were two things: a) how quickly the sideways universe unravels if you think about it too much and b) how little it ties back to what we’ve been watching since the beginning. It was a story that didn’t need the island – and that made the series as a whole ever so slightly pointless. Basically we got an ending that said: “You know, everything you’ve been watching over the last couple of years? You enjoyed it, right? Well, beyond featuring the same characters it’s pretty much unimportant to this story we’re telling about the afterlife.” The characters weren’t in sideways LA because they had been on the island, because of Jacob and Dwight, or because of the nuclear bomb. They were there because they all had, at some point or other, died. Their island adventures were pretty much incidental to that whole storyline – all that mattered was that they had met and played important parts in each others lives.

If a series’ ending tells us that, in the end, almost everything leading up to it is irrelevant, we’re in a bit of a quandary: do we dislike the ending, reject what it seems to imply and remember the series for the bits we enjoyed? Or do we embrace the ending and in the process come to realise that the series has more or less rendered itself pointless?

And for old time’s sake, I’ll end this blog entry without answering any of those questions. Cue credits!

P.S.: I love this reply to some of the misunderstandings of the final episode: