The Swedish movie Force Majeure, or Turist, as it is called here in Switzerland, is a mediocre affair, but you can almost see the very good movie it has entrapped in itself. A Swedish family is on a skiing holiday in a French resort when they are sprinkled over by the fallout clouds of a controlled avalanche. While Ebba, the mother, instinctively stays to protect the two kids, Tomas, the father, runs away. 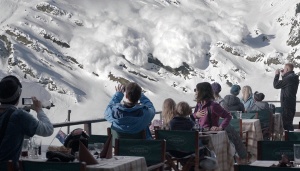 Ebba is devastated that her husband would abandon his family in a dangerous situation, while Tomas claims he did not flee the scene. Their marriage has its first cracks, and the two kids are afraid their parents might be getting a divorce. Ebba and Tomas only very eventually broach the subject because, well, sometimes the ones closest to you cannot tell you the truth because a) they don’t want to hurt you, and b) they will have to live with the consequences their telling might bring.

This is all very well handled, but there are scenes that are only loosely connected to that main story. There is a bit where Ebba is talking to a woman who is married while she and her hubby keep seeing other people. That scene is there because Ebba now knows that her husband is much less reliable than she would have guessed, and she is trying to find out if other people have to deal with such weakness, too. But instead of talking to that woman with her strong sense of self, Ebba could have talked to the woman’s boyfriend who is there with her at the hotel. What is it like to be the boyfriend of a married, strong-willed woman? Do you consider yourself a weak man beside a strong woman, or do you have to be just as strong to keep up? We get much less from Ebba in that scene than we should – we merely learn that she could not live in an open relationship. But we already guessed that.

There are good things in Turist, too. You might remember Kristofer Hivju from Game of Thrones because of his flaming red hair and beard and intense eyes; here, he plays Mats, the soft-spoken friend who has brought his 20-year-old girlfriend to the resort and feels he has to negotiate between Ebba and Tomas because, being divorced, he is an expert on marriage and relationships. The scenes between him and his girlfriend are very funny without breaking the ominous atmosphere of the movie’s main story. Ebba and Tomas always start their fights in the corridor where everybody can hear them, instead of fighting in their apartment in front of the kids. Another good thing are the expository scenes with the avalanche cannons and snowplows. And it is a very bold choice to play Vivaldi’s Summer over scenes of dense snow.

The movie ends twice. Ebba goes missing in dense fog, and Tomas finds her, his masculinity half-way restored. Then the bus on the way home almost crashes on the serpentine mountain road, and they continue their journey on foot. Both scenes would have been good endings. To leave them both in there is to add unnecessary running time. Drop the ending in the fog, and drop the conversation between Ebba and the other woman, and you have a better movie.