How does one continue a show like Broadchurch? One of the things I appreciated most about the recent, deservedly acclaimed BBC crime drama was that it ended: as all stories that aim to reflect the real world to some extent, there was a degree of openendedness to Broadchurch‘s conclusion, but there was nothing that called for a sequel, a second series. Except, of course, Broadchurch‘s success with critics and audiences, so as soon as the series had ended there was talk about continuing it. In the absence of a clear need for continuation, a second series faced an uphill struggle to begin with. What storyline could justify bringing back the characters?

The solution that the Broadchurch writers came up with is both ingenious and risky: at least judging from the first episode, the second series changes gear by changing genre. The first series of Broadchurch was a character drama through the lens of a crime story, and it’s the crime story that provided a clear structure: suspects come into focus, doubts are raised, secrets are revealed, and the murderer is uncovered. The series deftly balanced this structure against the drama of a little town where everyone knew everyone else, or at least thought so, and where you can scratch any surface and find some hidden or forgotten (but rarely forgiven,) guilt. It seems that guilt will also be one of the central motivators for the second series, as the first episode suggests its central hook will be the trial of the murderer uncovered at the end of the previous series. Legal drama can be as strong a structuring device as the tropes of crime stories. 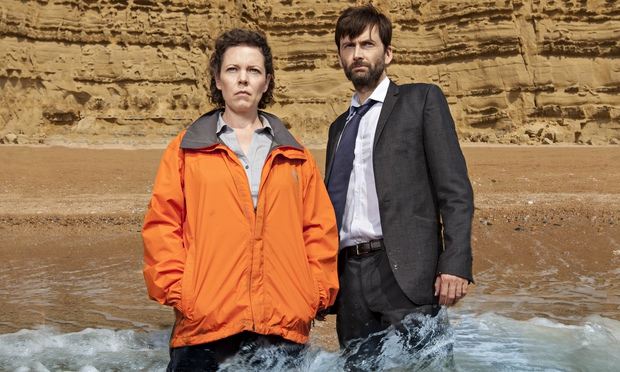 There is a risk that audiences who previously enjoyed Broadchurch as a crime story first and foremost will reject the change, although there are hints that the second series will have a parallel plot strand to the trial, focusing on the botched murder investigation that was central to David Tennant’s character and his motivations. There is another risk, namely that of retconning: the writers may be tempted to revisit and reexamine the events of the first series. Did what we were told happened really happen? If handled well, this can be intriguing, forcing us to reinterpret what we thought we knew. This is extremely difficult, though, and the more likely result of a retcon is a loss of trust in the story: if what we were previously told with relative certainty turns out to be inaccurate, why should we believe what we’re told with similar certainty going forward? There are degrees of this effect: it can already be problematic to fill in blanks in the earlier story, since this changes how the different elements of the story fit together.

So far I trust the creative team of Broadchurch – and a large part of the success of the first series was due to the actors as much as the writers. Or, perhaps more accurately, I don’t distrust them. However, they will have to prove that there were good reasons to continue this particular story beyond its success.