When I first heard about Warner Bros. Pictures’ plans to bring the Potterverse back to the big screen with Fantastic Beasts and How to Find Them, I pretty much dismissed those plans as them going back to their favourite cash cow: a decision based primarily on monetary interests. Rowling’s book, published in between the fourth and fifth Harry Potter novels, was more of a sourcebook for the fans, so why turn this into a film – or, indeed, a series of films? For the many shiny sickles and galleons the producers would add to their hoard at Gringotts, obviously. 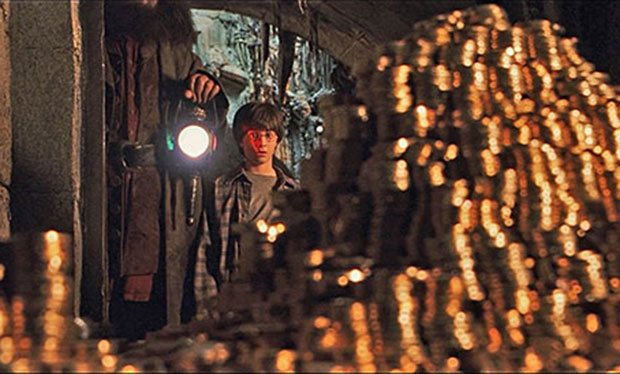 When the trailers for Fantastic Beasts started to come in, my opinion changed somewhat. In spite of my dislike for Eddie Redmayne (which has started to waver lately, but that’s another story), I was intrigued by the way the film looked to change up the familiar universe of Hogwarts and Quidditch: setting the movie 1) in the 1920s, 2) in the United States and 3) mostly in the muggle (or no-maj, as our transatlantic cousins put it) world seemed like a great way to inject freshness into a universe that had quickly come to rely on the cosy familiarity of its setting. Then, however, came the whiplash-inducing announcement that Fantastic Beasts would only be the beginning of a five-film series. I could absolutely see one or two films, even three, exploring a world that’s both new and old, but deriving five movies from a book that doesn’t even have a plot – well, let’s say that the fabled cash cow was again a likely candidate for one of those fantastic beasts, and Warner were obviously hoping to find it in their new series.

Having seen Fantastic Beasts, I can safely say that at least the first instalment holds up. Obviously it banks on the nostalgia of the Rowling fans, but it doesn’t feel like mere fan service. In fact, it may just do better at standing on its own two feet than last year’s great nostalgia vehicle, The Force Awakens. While I liked the latest addition to the Star Wars saga well enough, too much of it felt so over-familiar, it came across as pandering. Would the fans like a new Star Wars without a desert planet, a death star, a quasi-rebellion fighting a quasi-empire? Some of that film’s callbacks worked reasonably well (and I still find the reunion of Leia and Han Solo poignant and sweet), but too often The Force Awakens felt more like an extended “Previously on…” dressed up as a sort-of-new story.

In contrast, Fantastic Beasts has the occasional callback, but none of them feel like the film was constructed around them. There’s a brief mention of one Albus Dumbledore, but it’s a far cry from the fan service reveal of the Millennium Falcon in The Force Awakens. There are no characters that feel like the new Harry, Ron or Hermione, and I’d even say that in addition to the American setting the new characters, which are charming and interesting, are the best thing about the film and the strongest hook for future instalments. (It is a shame that some of the most interesting ones won’t be in any of the future films, but franchises unwilling to sacrifice strong characters quickly feel stale and inconsequential.)

Where The Force Awakens mainly filed off the serial numbers of the tropes used in the original trilogy and sold us old X-Wings with a new coat of paint, Fantastic Beasts doesn’t feel like it consists of 80% fan service and nostalgia. Instead, it uses its familiar tone and atmosphere, and a few familiar bars of Hedwig’s Theme, to set the mood but then do something new. Something that doesn’t feel like the filling-in-the-blanks exercises that too often come with sequels, prequels and spin-offs. Does Rowling have enough story to fill five films? I don’t know. In fact, story’s the main weakness of Fantastic Beasts, as the film takes almost an hour to find its feet narratively and its ending is perhaps too intent on setting up the next film – but even then, it stands on its own surprisingly well, and certainly more than The Force Awakens does. I still have my doubts about whether Warner’s heart is in this as much as their bank account, but the creative team has definitely given me faith that they’re at least trying to bring back the magic without relying on a Doubling Charm.