You know how this story ends. It ends the same way as every story does, if we’re being honest. “Happily ever after” sounds nice, but it is really only a comforting fiction. All stories move towards the same end, mine, yours, everyone’s. Does that make them bad stories? Is every story that’s honest also depressing?

Then again, what choice do we have? And, if we admit to ourselves – not just occasionally, with a start, but with every breath – that every story ends the same way, would we still choose to live those stories? Could we even, without our hearts breaking constantly?

Arrival is a strange film – or perhaps better, it is not a single film. In the end it tells two different stories: one a thoughtful take on humanity’s first contact with alien life, while the other tells of a mother witnessing her daughter’s birth, all too brief life and early death, of a rare and incurable disease.

And this is where anyone who hasn’t seen the film yet should go and read something else, because for once I would very much say that spoilers matter. Because Arrival, in its quiet, awed way, plays a great trick on its audience. Its protagonist, linguist Louise Banks (played with measured integrity by Amy Adams) is brought to one of the ominous alien ships that have appeared overnight, in order to learn the visitors’ language and communicate with them – but as she comes to understand the alien language, which reflects their non-linear perception of time, it rewires her brain, giving her the same non-linear understanding of time that the visitors have: Louise begins to ‘remember’ the future much in the same way as she remembers the past, and we also begin to understand: those flashes of Louise’s life with her daughter, which our movie-trained brain readily interpreted as flashbacks, were in fact flashforwards. Her daughter Hannah’s story, with its inevitable, heartrending end, is in Louise’s future. Even before she conceives her, she knows that Hannah will not live beyond adolescence.

A day or so after I’d seen Arrival, my film geek mind did have a few niggling doubts about the film and the bait-and-switch it pulled. One is quite general: while I very much liked the two different tales Arrival told, I don’t think it reconciles them. The one of first contact and the resulting tensions between Earth’s superpowers that almost lead to war is well told, if not all that original, but it affected me considerably less than Louise’s story; while it would have been great for the two strands to be more interwoven thematically, that is a relatively minor flaw. What is perhaps more relevant is that Louise’s newly gained understanding of time raises questions of predetermination and free will, which Arrival hints at but cannot say much about, as the twist (what a squalid word, though, for what is such a fundamental shift in the film and its central character) comes very late. Does Louise choose to have her daughter, even though she knows what will happen, or does she know that she will have a daughter who will die young due to a horrible illness, without having any free will in the matter? Surely this does make a difference to the character, doesn’t it?

On a more personal level, though, the question doesn’t matter. Arrival‘s reveal of what was happening to Louise resonated with me in a very specific way. Seven years ago my mother was diagnosed with metastatic cancer, and the moment her doctor told us where we were at, it was clear that the ending to her story had been written, by life, fate, God, whatever fiction to which we choose to ascribe authorship to our lives. Her death was still a few months away, and while we were not all equally aware of what exactly the prognosis meant, we could no longer think that my mother’s life was open-ended. The remaining pages were numbered and the final page had been written. I did not know what was on every page on the way there, but I had a pretty good idea. 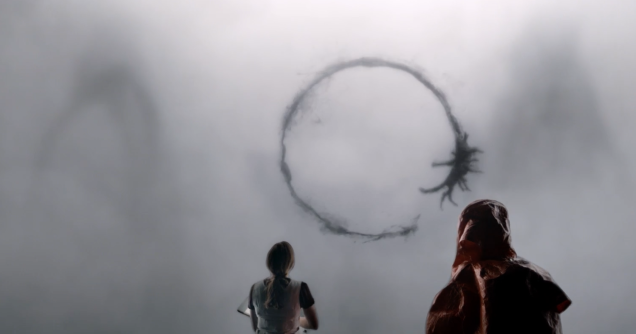 At that point, free will loses a lot of its meaning. Of course we still had choices to make, but they felt small and insignificant compared to the immovable truth hanging in the middle of that hospital room. There are things I did, or failed to do, during those remaining months that I sometimes wish I could change; the path to the end wasn’t quite as straight as expected, and there were surprising moments of strangeness and light in what followed. But knowing most of the journey and the eventual ending didn’t make things meaningless: it added a keen awareness to everything.

Arrival captures a lot of those feelings, and in particular what I felt and thought in that hospital room, as my mother’s doctor was explaining to her and to us where we were at and where this was going. The film does so stealthily, quietly folding the story it ends up telling into its thoughtful take on first contact, until, like Louise, you understand what is happening. Our stories are written, and so are all the stories our lives touch. Spoiler: everything ends. We can only live our lives facing, and in defiance of, this.

Arrival suggests that Auden had it right both times. Even if we already know how the story ends, we can try to be there for those whose stories we share. We don’t need to know the future to understand that simple fact. We can never shift the truth that faces us at the end of each story, but this doesn’t render our doomed little lives futile. Whether Louise has a choice in having Hannah or not, she embraces that life for as long as she and her daughter have. Depending on how you look at it, the ending may have been spoiled for us – but it is up to us to do what we can to give the rest of the story meaning.

One thought on “We must love one another or die”