Phantom Thread one of the best-looking movies this season. Since it’s set in the 1950s British fashion scene, it’s certainly the best-dressed movie, without flaunting its lavishness. The dresses, often also the people and the atmosphere of the movie, have a kind of gorgeousness about them. The film feels like it was made decades ago, but it is far from dated. There is a love story at the core of the film, between a high-end middle-aged fashion designer called Reynolds Woodcock and a clumsy French-speaking waitress named Alma Elson. Reynolds is immediately smitten with Alma; while most other men would want to undress her, he is thinking about dressing her up, already sketching clothes for her in his mind.

For almost an hour into the movie, Alma suspects that she might just be another face in a long string of Reynolds’ lovers: in the gentlest way available to him, he uses his girlfriends as live mannequins, and they are flattered by his professional attention and maybe even by his professional description of their physical attributes. Alma, for one, thinks she is on a date when Reynolds’ sister and second-in-command Cyril turns up to take Alma’s measurements. She realizes that this measuring, which she might have mistaken as some kind of elaborate foreplay, has taken place many times before, with other girls. Alma is allowed to stay for a while, but she ruins Reynolds’ whole working day by making too much noise at breakfast. His work demands a rigid schedule, and any deviation is dangerous. He may be a genius, but the cogs in his support system – the models, the seamstresses, Cyril, Alma – have to perform according to his needs, or they must leave. e is so obsessed with his work, he barely knows anything else.

For all the fashion-show scenes with their lavish dresses, Phantom Thread is perhaps Anderson’s most single-minded movie: either the relationship between Alma and Reynolds with work, or it won’t. Such a focus is only comparable to the courting between Barry and Lena in Punch Drunk Love, or to Daniel Plainview’s obsession with finding oil in There Will Be Blood. All the other Paul Thomas Anderson movies are pretty much ensemble pieces, juggling several storylines at once. Phantom Thread is also a departure for Anderson in two other respects: this is the first feature he has shot himself as the director of photography, and while the last five PTA movies have all been set in California (his debut Sydney took place across the border in Las Vegas), this one is set entirely in London and the nearby coast. 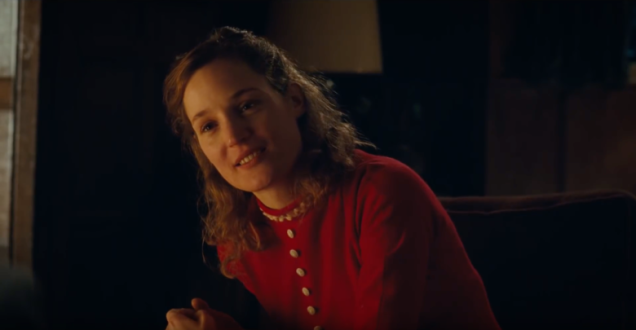 The performances, especially those by Daniel Day-Lewis and Lesley Manville, are spot-on. Day-Lewis has announced his retirement from acting; I really hope he pulls a Soderbergh and will retire from retiring at some point. I admired Manville’s Cyril almost more because she has to read her brother’s moods and execute his instructions, translating his genius to the team of seamstresses in the attic room of his London mansion. Plus she has to accept that Alma might just be the one woman who can understand Reynolds better than she can because Alma can get closer to him than any sister ever could. There is a moment where she tries to be frank with her brother the way Alma is. It doesn’t end well for her, and she retreats immediately. And there is, of course, Vicky Krieps as Alma, a woman whose beauty is lost on boys and young men. She reminded me a lot of Rachel Griffith. Alma knows what she wants, and while Reynolds and Cyril have streamlined and formalized their manners and emotions, Alma’s frankness is a breath of fresh air. Because getting to know Reynolds’ inner life is a challenge to her, her own wants and needs become sharper and more defined. There are brilliant supporting roles from Gina McKee, Julia Davis, Brian Gleeson and Harriet Sansom Harris.

Alma insists on having a relationship with Reynolds as much as he insists on working long hours without the least interruption. She is hell-bent on having moments of couplehood and prepares a lavish dinner for him. He reacts with irritation: “Are you afraid that I don’t need you? Well, I don’t.” Alma retaliates: “I want you flat on your back, helpless, tender.” On the surface, this is a declaration of war. And then something else happens: the last half hour would turn into the war of the Roses if this were a lesser movie. Since this is Anderson’s own screenplay, he uses a kind of subtle v-effect, showing us scenes that seem strange initially, almost unreal, in a similar way he already did in The Master. The couple’s verbal sparring brings something else to the foreground, a glimpse of a chance of a valley of shadows in Reynolds that might have a silver lining. If you watch carefully, that chance announces itself in two or three short moments throughout the movie. What they have is a kind of dominant/devoted relationship, but they are willing to risk much more than the bobbleheads in the Fifty Shades series. What they are ready to go through is beneficial to both of them, but it leads through a lot of pain. Seen from the outside, these scenes play with a slight pinch of Gothic horror, because there is the surprising realisation that Reynolds needs Alma more than she needs him.

One thought on “When has a stitch ever saved anyone?”