I have have climbed the cathedral of Acre. I have swum in the canals of Venice. I have prowled the streets, and the roofs, of Renaissance Rome. I have hobnobbed with the Borgias and with Robespierre, I have fought alongside George Washington, plundered with Blackbeard and listened to Charles Dickens tell tales.

And, just lately, I’ve added to my repertoire: I have run away from an angry hippopotamus – straight into the jaws of a Nile crocodile. Oh, and I’ve slid down the Great Pyramid, but it’s the tussle with the crocodile that sticks in my mind, much like I stuck in its teeth. 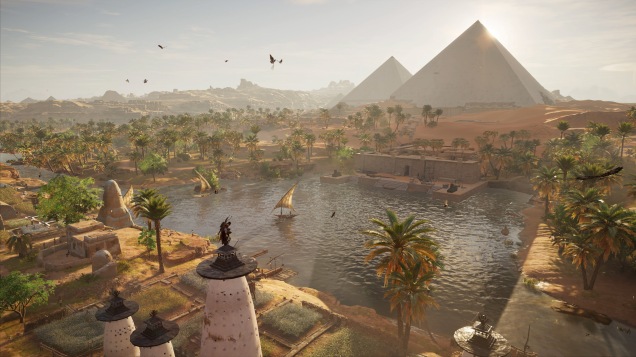 The Assassin’s Creed games have long been the wet dreams of virtual tourists and historians. In terms of gameplay they are flawed and tend towards the shallow and simplistic, but their environments are second to none. Are their depictions of historical locations authentic? From what I’ve read and seen, they tend more towards the best-of topography of theme parks than towards actual realism, but it is clear that a massive amount of research has gone into the specific times and places the series conjures up.
While the franchise took a year off after diminishing returns of both the creative and the financial kind, Assassin’s Creed Origins doesn’t reinvent the wheel completely – though it is more ambitious in the world it depicts. Where most earlier titles focused on one major city (with some notable exceptions, such as Black Flag‘s Caribbean), Origins recreates a sizeable chunk of Ptolemaic Egypt, a place that is surprisingly varied for someone like me who draws most of his knowledge of the time and place from Asterix and Cleopatra, which I read about 30 years ago. Origins gives its protagonist and player stand-in Bayek cities like Alexandria (including the obligatory library) and Memphis (not including the anachronistic and wildly misplaced Elvis) to explore, but also deserts, swamps, temples and ruins. In fact, many of these places are as old and mysterious to Bayek, whose adventures take place in the century before the birth of Christ, as they are to me: the multicultural Egypt of Ptolemy XIII is closer in history to the present day than it was to the era when the Great Pyramid and the Sphinx of Giza were built. 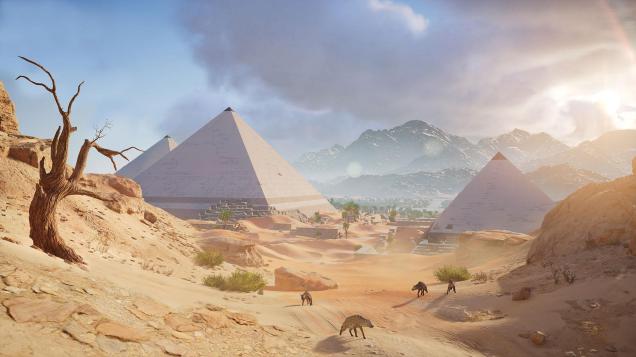 Obviously Origins‘ Egypt is a place both mysterious and exotic to most of the game’s players, and Origins banks on this exotic appeal, but over the dozens (if not hundreds) of hours you spend playing it becomes familiar. You begin to recognise the contours of the land, the obelisks in the distance give you an indication of where you are, and those ancient, enormous stone triangles dominate much of the landscape. You explore the place, but you also become a part of it: a protector and guardian of the people who inhabit it (unless they’re the bad guys, but Assassin’s Creed has always been disconcertingly good at compartmentalising between assassinations necessary for the greater good and murder, i.e. the bad kind of killing done by the other side). You started out as a tourist, but you end up as Bayek of Siwa, the last Medjay.

And then you blunder into a hippopotamus lair, and as you run away from a hippo (trust me, they look decidedly less comical once you’re that close) you end up getting a good, close look at the teeth of a crocodile.