I have walked 500 miles and much, much more, through virtual New Yorks, irradiated zones, Wehrmacht fortresses and zombie-infested streets. I’ve parkoured and teleported, I’ve driven, hovered and flown. Traversing spaces that only exist as zeroes and ones on digital media is one of the things that I love about video games, and it’s one of the things that modern gaming does so much better than the 8-bit pixelscapes I grew up with. It’s not even graphical fidelity, although that’s part of it; more than that, it’s that modern hardware allows for vastly more ambitious, three-dimensional environments, whether that’s the Hollywood realism of GTA V‘s parody of Los Angeles or the stylised aesthetics of Journey‘s deserts and snowy wastes.

Last week, a new Spider-Man game came out. I like the version of the character in the Marvel Cinematic Universe, but I’d never played a Spider-Man game before, so Spidey himself and his rogue’s gallery wouldn’t have been enough to entice me – but when I saw the early gameplay videos, I was caught in the game’s web. It wasn’t its graphics, although it depicts a gorgeously lit New York with its various boroughs, nor was it the glimpses of a plot that looked perfectly competent but not a little generic.

No, it was the game’s take on the character’s preferred way of getting from A to B: swinging by a hypertensile thread of synthetic spider silk attached to skyscrapers. All my favourite ways of moving through game spaces combine a fantasy of freedom with an element of physics, a sense of inertia. Game characters ideally have a weight that is felt when moving through the environments, which makes them feel like they’re part of this virtual reality. Getting the balance right is difficult, but Spider-Man absolutely nails this.

I’ve not played all that much of the game yet, but most of that time I’ve just spent zipping through NYC, getting a feel for the way Spidey speeds up on his downward arc, getting dangerously close to the busy streets of the Big Apple (sometimes his feet touch the tops of cars or scrape the asphalt briefly), then zooming upwards again, letting go at the apex and throwing out another line of webbing. I’ve moved faster in games, but I’ve rarely felt that speed as much as here. 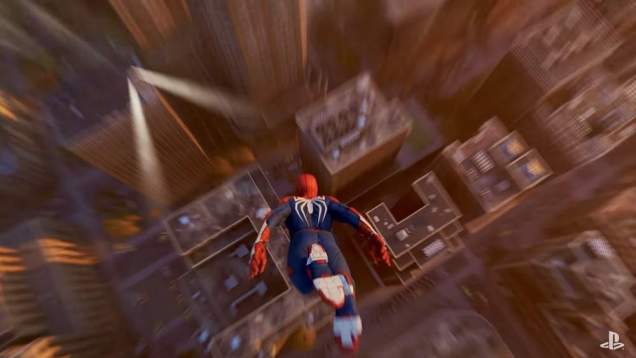 The game itself is exceedingly competent, it’s fun and well written, but it’s pretty much what you’d expect from an open-world superhero game. You uncover sections of the map by unlocking towers, you foil street crimes and upgrade your skills, you do missions that develop the world and the story. I’d absolutely recommend this to fans of Spider-Man who like to check out their heroes across all kinds of media. It’s the kind of game that’s hugely enjoyable and that reviews well but that’s also just a bit forgettable for all its craftsmanship. I won’t remember much about the game in a year’s time, most likely.

Except for that swing. In one deceptively simple gameplay mechanic, with one press of a button, Spider-Man has given me a glimpse into why there are people who, from the entire catalogue of Marvel superheroes, would pick this goofy, geeky kid first and foremost. Because ingenuity, spider silk and physics can make you soar.