Apparently Bergman wasn’t a huge fan of the first film he directed, Crisis (1946), which he called “lousy, through and through”. He wasn’t much kinder to his third, A Ship to India (1947), referring to it as “a major disaster” – except when his producer Lorens Marmstedt called to urge him to cut the worst parts, at which point Bergman rose to his film’s defense: “I informed him that I had no intention of cutting even one foot from this masterpiece.” Bergman may have been young and relatively inexperienced, but obviously he already had an ego to match a much more accomplished director.

After the triumph of Smiles of a Summer Night, I wasn’t too much of a fan of Crisis myself, but I liked it better than A Ship to India, which lacks the former film’s comedic touch. Instead, A Ship to India takes itself very seriously – which fits its main character, Johannes (played by Birger Malmsten), who takes himself seriously the way that particularly insecure young men often do. More than Crisis, Bergman’s third film is an out-and-out melodrama, going for big emotions underlined by swelling strings, and like so much melodrama it doesn’t necessarily travel well. The other characters – Johannes’ domineering father Captain Alexander Blom (Holger Löwenadler), his long-suffering mother Alice (Anna Lindahl) and Sally (Gertrud Fridh), the young woman who is first Alexander’s and then Johannes’ lover – fare somewhat better than the young man, as their anxieties and suffering are generally more internalised, whereas Johannes’ self-pity makes itself heard with the kind of whiny stridency that endears few characters to the audience. 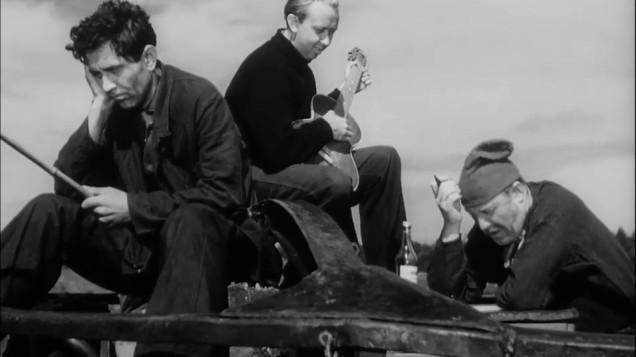 Nonetheless, there are moments where the film surpasses its melodramatic material: a striking camera pan looking down as two characters brawl their way across a busy town square, some moody use of shadows and light, and the trio of Löwenadler, Lindahl and Fridh bring a wary, lived-in quality to their characters that is more affecting than Malmsten’s messily adolescent affectations. (As is sometimes the case with annoying young characters, it is difficult to say whether it is the character or the actor’s performance that is annoying.) When the characters go dark, there is a conviction to them that points ahead to Bergman’s more successful later films. As such, while I am unlikely to revisit A Ship to India, it does make for an interesting stepping stone towards the films that would make Bergman famous.

So, after one major hit and two mostly-misses, we’re ready for a true Bergman classic, which I’ll be revisiting next month: Wild Strawberries (1957).

The quotes by Bergman are taken from Criterion’s essay on “Crisis and A Ship to India: Bergman in the Making”.