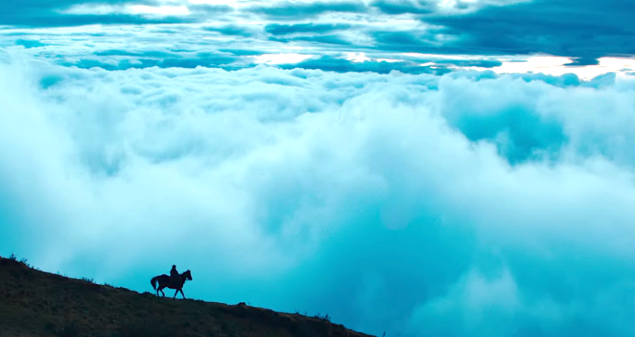 The first half hour of Alejandro Landes’ debut feature Monos contains some of the most beautiful images of any movie released this year. We are somewhere in Latin or South America, so high up that the clouds seem lower than the silhouettes of the child soldiers. There are red-burning clouds trying to scale the jungle-green mountaintops; there are lush meadows and old abandoned fortifications. There is a war, but we know less about it than even the eight teenagers in their rag-tag, mismatched dirty uniforms.

And when I say child soldiers, I mean that they are really more on the childish side than on the soldierly side: they tease each other with their nicknames, they play blind football  to pass the time, they are grandstanding with their guns in their underwear. One girl and one boy ask the instructor if they are allowed to get married. He allows it. Playing house is a distraction from their idle days. They are cold and hungry. They get a conscripted cow, and they have to watch over the animal with the same care that they watch over the American hostage (played by the only cast member I recognised, Julianne Nicholson). The audience is left clueless what the exact nature of the conflict is, but since this is about nine characters and a cow, it matters little. If you are anything like me and run for the hills if a movie contains an overt political message, then you can feel safe with this one.

SPOILERS AHEAD. And yes, Monos steals shamelessly from Apocalypse Now and Lord of the Flies. The trick is: it takes some spare parts that it can use from both works and builds it into its own engine. A lesser movie might get crushed by alluding too strongly to either of those classics. Monos doesn’t make that mistake. It’s largely character-driven, except when the American hostage tries to escape – twice. I had to think of Werner Herzog’s Rescue Dawn with its open bamboo prison doors because the jungle is the real prison.

Monos sometimes concentrates on one or two characters for longer stretches of time. There is a tense moment when the hostage Sara and her watcher, a young woman called the Swede, are trapped in a collapsed underground shelter. Who will try to manipulate who into what, and who will win? Sara is older, and she knows the soldiers maybe better than they know her. She has to use that to her advantage, never knowing if that will be enough. Monos, I am sorry to report, fails towards the end. The fate of some of the characters is unclear, and while I can accept that in two or maybe three of them, I am unsure what happens to four or five of them, and that is a slight failure. Monos, for very long, is so good that I started to care about most of the characters on screen. Not knowing their fate and getting upset about that is a sign of quality.

One thought on “At War, at Play”