To say that I like Six Feet Under would be an understatement. It is perhaps the best TV series I’ve seen. Its writing, acting, filming are among the best in the medium. But beyond its obvious craftsmanship, it has touched something inside me. It has made me think more about life and death, about family and relationships, than anything else.

And yet, I would be lying if I said that it was above criticism. As is any narrative that is, at least in part, made up in installments rather than planned from the beginning, it is uneven. There are storylines and characters that work less well, that sacrifice some complexity for overly facile satire or (less often) for melodrama. They still pull it off most of the time, but those bits stand out as not quite up to the usual standard.

We’re currently watching season 4 – our Sunday morning ritual consists of breakfast and an episode of Six Feet Under. Today we say the episode “The Dare”, and especially since I’m seeing it all for the second time, I feel that the storyline meanders somewhat. Claire’s art school hijinks aren’t that interesting, and I could do without Keith’s bodyguard duty anecdotes. Even those plotlines could work better if there was some more stringency (seasons 2,3 and 5 have this much more) and if it felt that the season is going somewhere, which it will, even if it doesn’t feel like it now. Nevertheless, even in these doldrums there are gems: Joe’s reaction to Brenda’s delicate confession, the way Claire handles her proposal to Edie so matter-of-factly, the return of Kathy Bates’ wonderful, wonderful Bettina.

And the late Lisa Fisher (Lili Taylor) dressed up as a human-sized Petunia, throwing things at Nate: “It’s pain. Get used to it.” Hurls another onion at Nate’s noggin. Bless her. 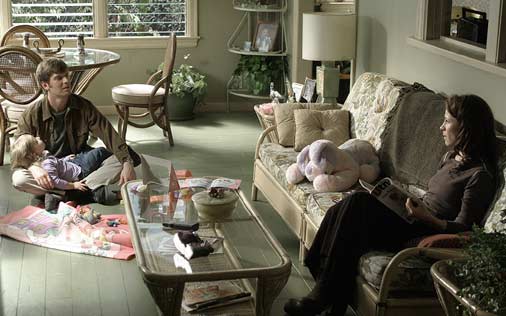 (Unfortunately I couldn’t find a picture or video of Lisa the Amazing Petunia. Sorry.)