What is it about pixels that makes Original Gamers like me all gooey and nostalgic? Show us mid-90s polygons and we’ll go, “Ugly! Get it outta my sight!” Show us one of the original Space Invaders, or Inky, Blinky, Pinky or Clyde, and we get teary-eyed as if we’d just seen the first glimpse of our PC after having been held hostage by computer-hating luddites for six months. Mix it with those bleepy sounds of yesteryear (or, more accurately, yestercentury), and we’re back in the past, back at school where we consider ourselves much cooler than the Chess Club set but are just as incapable of getting a date… but at least we’ve got a firm grip on our joysticks, haven’t we?

There’s an entire branch of computer-based painting called Pixel Art (and if anyone goes Ebert on the term, I’ll make sure that they wake up gnawed at by an army of rabid hamsters) that is all about using the limitations of pixels to nostalgic effect. Pixel art isn’t necessarily as rough and basic as the original Donkey Kong – higher resolutions mean more pixels – but it tends to have a similar style as those Where’s Waldo? books. Check out this Pixel Art London (click on the pic for the full effect): 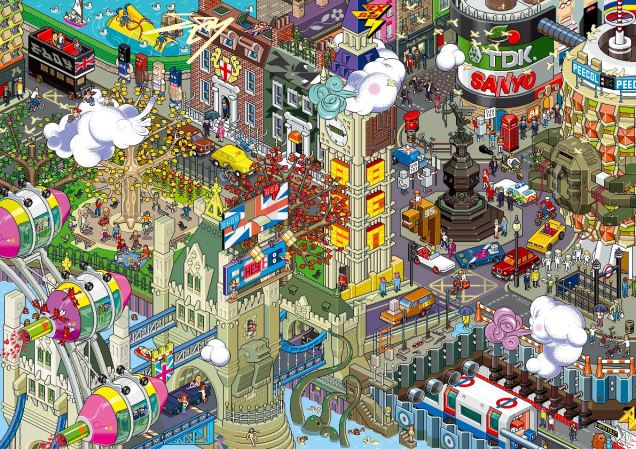 What is it about pixels that has that effect, at least on those of us who’ve been playing games since the heady days of the C-64, NES or Spectrum ZX? Is it the Lego-combined-with-OCD look? Is it a hankering for simpler, better times when we didn’t need to upgrade our computers every year to make games run well, when we didn’t need to download half-a-gig patches just to make the games work that we’ve just bought? What makes a good instance of pixel art much more charming than 90% of current-gen polygons (other than the fact that all too many current games cater to frat-boy, jock-straps-and-boobies tastes that never did much for me)?

I don’t know, but I want to leave you with this video – one month later than the rest of the internet, mind you: