Roman Polanski’s The Ghost Writer (or The Ghost, if you’re in the UK) is one handsome looking piece of celluloid. It is clearly made by a director who knows his craft.

It is also a film rendered trite, silly and questionable by a woefully inadequate plot.

I remember the reviews at the time of the film’s release being fairly positive. No one called this a Chinatown or The Pianist, but critics described it as a smart political thriller. The problem with such a description is that The Ghost (I’m going to stay with the UK title, since that’s what it says on my DVD case) isn’t particularly smart and ends on a downright imbecile note, and it isn’t much of a political thriller. It gives the appearance of one, at least for its first half; dealing with a ghost writer called in to complete the memoirs of the British ex-Prime Minister after the former author and aide of the PM ends up with a lungful of salt water, it exudes Tony-Blair-Iraq-War-“Special Relationship” vibes all over. The cast is as handsome as the cinematography, with Pierce Brosnan a flattering doppelgänger of Phony Tony and Olivia Williams offering a take on Cherie Blair.

Thing is, though, and this is where people averse to spoilers should get the hell outta Dodge, Robert Harris pulls the same trick he did in Enigma: when it comes to resolving his thriller, the political takes the backseat to the private, in an ultimately cheap twist. Throughout the film, Ewan McGregor’s writer finds more and more evidence that former Prime Minister Adam Lang was pretty much acting on behalf of the CIA when he got his country into a problematic war in the Middle East. (Sound familiar?) However, the twist – delivered in an immensely hackneyed fashion, in a sentence formed by putting the first words of the memoir’s chapters together – reveals that it wasn’t Lang acting on behalf of the CIA, it was his wife.

What doesn’t help the twist is that it’s delivered in a cod-Hitchcockian scene: very well shot, but utterly nonsensical, and ending with the author killed and the mystery a secret yet again. Except the ghost writer’s actions suggest that he’d already died of a massive stroke, because his last action (before getting run over off screen by Them) suggests that the character was already braindead. I have a fairly high tolerance for characters doing things that are less than bright, because I can believe that someone scared out of their wits may not be at their best intellect-wise, but Ewan McGregor’s character’s final action is that of a retarded cucumber. And what we’re left with is a film that I wouldn’t mind framing and hanging on my wall – as long as we can consign its plot to a government vault whence it will never re-emerge again. 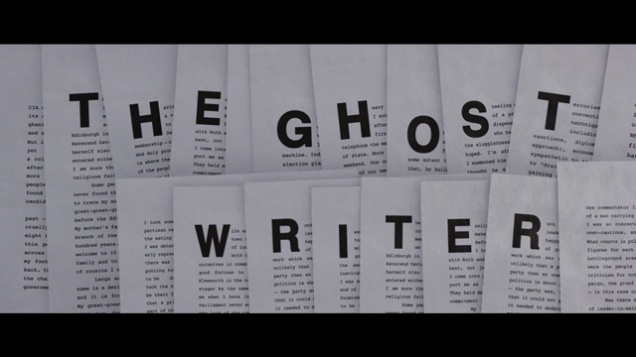