You know you are in the country of ending seasons when the soundtrack starts to be inventive. This is why we hear Nina Simone’s Ne me quitte pas when Kevin, with Matt Jamison’s help, ties up loose ends in Cairo. There is something very spooky in the cleric’s practicality: “I have shovels in my trunk.” Another quitter is Christine, who leaves Tommy to find the baby in a public lavatory. Jill quits her former life by joining her mother and the smoky ranks of the GR. 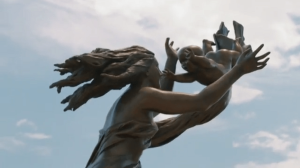 These are powerful scenes, but they are all upstaged by the Guilty Remnants’ final project. Nora Durst gets up, brushes her teeth and goes down for breakfast, only to find her family united at the breakfast table again. But wait – no. These are the departeds’ hollow imitations with dead masks modelled after the stolen photos and dressed in their own clothes stolen by the GR. These are puppets that spark a tiny glimmer of hope that your beloved ones have returned, and then you realize how grotesque these fucking puppets look.

So the season’s finale is a very good one for a long time. Kevin Garvey dreams one last dream, maybe the most disquieting one, involving a certain National Geographic, Patti, and his dad. There is a conversation between Kevin and Matt where Matt’s questions are as revealing as Kevin’s answers. It’s clear that just because you don’t believe, you can still feel entirely guilty. Or you can believe and still go wrong.

And then, of course, there is the meeting between Kevin and Wayne in the men’s lavatory of a roadside diner. With his guts hanging out and only minutes left to live, Wayne fears he might have been a fraud, and wants Kevin to wish for something. If Kevin gets his wish, Wayne has been a real healer, like a twisted djinn. We can only guess what Kevin wishes for, but Wayne seems convinced he can grant him that wish. Then Wayne crosses the bridge.

Kevin and Matt return to a Mapleton in turmoil. People want to hurt the GR and to burn those grotesque puppets. Megan is badly beaten up and tied to a lamppost; people with guns run through the streets, mad with anger and grief. The GR headquarters are aflame, and the fire brigade and the police are not in a hurry to help them. Kevin looks on as a couple throw their son’s eerie avatar into the fire. Just imagine: you are angry enough to throw that puppet in the flames, but you still watch your beloved one’s likeness melt.

Then Laurie appears, her voice hoarse from disuse, and yells her daughter’s name because she is in the burning house. That scene and her rescue are over the top, and they didn’t involve me the way they could or should have. Nora’s goodbye letter is touching, but then the ending comes around and twists the plot in a weird direction. Nora is on her way out of Mapleton when she finds Wayne’s and Christine’s baby on the Garveys’ front porch. Kevin and Jill look on with their soot-covered faces. Is this what Kevin wished for?

The longer I think about it, the less I like it. Give a despairing woman a baby and she finds new meaning in her life? Really? I cannot believe that this is Kevin’s wish. This is an abysmal ending to an otherwise pretty decent final episode.

There were plotlines I could never warm up to. Christine and Tommy are uninteresting and could be cut. Jill should be better written. All three roles need better acting. There is only one episode that really stinks, the one with the baby Jesus, mainly because the weak plot and the bad editing screw up things. There are scenes from the pilot that remain unexplained, for instance Tommy’s vision of someone jumping from a rooftop. I also would like to know why Garvey Sr. went loopy. But I guess it’s better to know some of the questions than all of the answers.

Oh, but the good things. I like the cast. Ann Dowd. Carrie Coon. Amy Brenneman. This series has a lot of strong women. Justin Theroux. Scott Glenn. Christopher Eccleston. The quiet, threatening presence of Dean (Michael Gaston), who thinks he is one of the good people. Aimee’s forward comments on the Garveys’ family life, played by Emily Meade. The GR are annoying and creepy and cruel on a good day, and they need to be kept in check, but apart from those whistles, they have always been interesting to watch. A special mention goes to Max Richter, who composed the score. If you’ve seen Waltz with Bashir, you know what he is capable of.

I am glad I watched the series, but it didn’t leave me gasping from one week to the next. I am not big on symbolism – when Kevin Garvey pours a gallon of water over himself, I don’t think of baptism -, but the series works without it, too.

I’ve heard that the Departure will never be explained. That’s just as well, but it’s also a risk. The series cannot rely on a denouément of the main event, so it must invent and re-invent things for those people who are still around – and it is, after all, a series about the ones left behind. The lack of a return to the main event is a freedom only sure-handed screenwriters can handle, and I don’t know how much they can rely on Perrotta’s book. For instance, what is in store for season two? More sadness and sense of loss? I doubt that this will work, so they have to think of something. Will the GR still exist? If not, is there another collective way of dealing with the Departure?

Well, why not? If the departure has taught me one thing, it’s that there is no closure. Fuck closure. There are ways of dealing with stuff, and ways of not dealing with stuff, and it’s no matter if it’s October 14 or March 9 or any other day. You change either way. Apparently, the latter way prevails, because parts of Mapleton are aflame. In a way, everybody is worse off than during the departure. I wanna know where they go from there.