The Lunchbox starts with Ila, a Mumbai housewife and mother, cooking food and packing it in a metallic lunchbox that consists of stackable bowls. That lunchbox gets delivered across Mumbai to a grumpy, lonely office worker. He is mesmerized by the food. 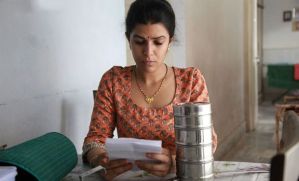 If you want, you can look at The Lunchbox as a modern-day fairy tale. Ila wants to rekindle her failing marriage by enchanting her careless husband with outstanding food. We realize only eventually that Saajan, the grumpy office worker, is a complete stranger to her. The Mumbai lunch distribution industry has made a mistake. “Impossible!”, says the man who delivers Ila’s lunchbox. “The people from Harvard have confirmed that our system is faultless!”

She cooks lunch the next day, adding a little note of apology to the bowl with the naan. He writes back, complaining about the salt. A correspondence starts, in which Ila can tell about her loveless life, and Saajan, to his own surprise, tells Ila about his deceased wife. Although they have never met, they feel less lonely that way. The comfort of strangers is the best thing in both their lives right now. 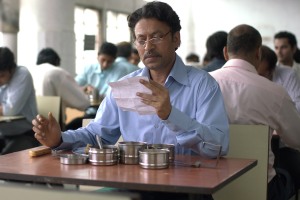 A lesser movie would make them fall in love with each other. Not this film, although Ila’s food seems to have such power. Eventually, Mumbai and its overcrowded public transport system play a part. Saajan is assigned a successor, but is not keen on training the man. This movie manages to balance light comedy with darker undertones. I liked the unseen upstairs neighbor, an older woman who shouts recipe suggestions down into Ila’s kitchen. I also liked the small moments of coincidence, for instance the story about the ceiling fans.

The two main leads are played by Irrfan Khan and Nimrat Kaur, who left their impressions at this year’s Sundance festival. The director, Ritesh Batra, grew up in Mumbay and knows a lot about food and the lunchbox delivery system. This movie is his debut and is the result of a documentary he didn’t finish in favor of this feature. Towards the end, one or two scenes feel contrived and on autopilot, but no matter: The Lunchbox is a delight. All that food made me hungry. Maybe once in a while, you should go to the kitchen and cook as if your life depends on it.