Since I give every movie one chance, sometimes two, let’s call this one an experiment, because me watching Personal Shopper could go either way – I might like it, or I might not. Personal Shopper seems to lend itself particularly well to this experiment because it got booed first and later received rave reviews in Cannes – not a lot of middle ground. I admit I found Clouds of Sils Maria sometimes quite intriguing, sometimes weird and incoherent, and sometimes it dragged along for me. On the whole, Sils Maria was probably not as smart as it thought it was. So here we have the same director, Olivier Assayas, and one of its two stars, Kristen Stewart, in the main role. I know some people have huge problems with her, but I am not one of them. I liked her in The Yellow Handkerchief as well as in Welcome to the Rileys. 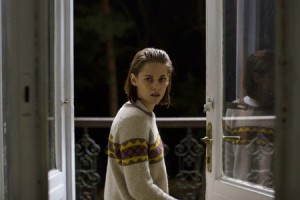 Personal Shopper seems to divide into three parts. The first one is Maureen (Stewart) and her job as the personal shopper of a woman named Kyra (Nora von Waldstätten), who is so busy she only has about two minutes of screen time and barely acknowledges Maureen’s presence while lamenting to her lawyer that the gorillas whose habitat she finances should show some gratitude and show up for a scheduled photo-op. While that scene plays almost like a farce, the other parts where Maureen goes shopping are really rather boring and a symptom of super-capitalism created by people who have so much money that they have it spent by stand-ins. There is probably a whole movie in that, but it’s not this movie here. The only really interesting thing is that Maureen always wears rather drab clothing while going from one high-end clothing store to the next.

Another part is the ghost story with which the movie starts (and there are SPOILERS from here on out). The ghost scenes are by far the strongest scenes of the whole film. Maureen is looking for her dead twin brother; both twins have/had the same heart deficiency, and Lewis died. They made a pact that whoever would die first would give the other one a sign, so Maureen is likely to see signs everywhere. And indeed, there is a ghost, but Maureen is quick to realize that this is not Lewis. That is quite a tense, atmospheric moment, and neither Assayas nor Stewart overplay it. Lewis, however, will turn up later in the movie, and it’s a clever move that this time, Maureen doesn’t realize that her dead twin is there at all, smashing glasses. Later, she suspects that another ghost, a poltergeist, might be she herself. That’s very intriguing, but the film never really makes anything with these clever twists. The first ghost, a woman, vomits ectoplasm and then vanishes. Why not make slightly more of those moments?

The third part involves text messages on Maureen’s phone from an unknown sender, encouraging her to wear Kyra’s clothes and doing other forbidden things. Maureen assumes that this is a sign from Lewis, and eventually agrees that it is exciting to get into Kyra’s dresses. Turns out these texts are from Kyra’s ex Ingo (Lars Eidinger) who will eventually kill Kyra. That scene puzzled me. Ingo gets only slightly more screen time than Kyra and then kills her and gets arrested, and the audience as well as Maureen are left puzzled. There is not a shred of motive anywhere in the movie. Jealousy? Money? Did Ingo want to do something very forbidden? And how are we supposed to care about Kyra or Ingo if they are on-screen for much less than ten minutes?

On the whole, Personal Shopper fails in combining those three narrative strands into anything meaningful. However you look at the ghost story, the personal shopping and the crime drama, you can’t make a unified whole out of it. I can see that the shopping is all surface and the ghost story is all subconscious, but where does that lead us, or Maureen? Does Kyra’s murder connect the superficiality of shopping with the deeply personal quest to find a dead sibling? If so, how? If there is some underlying concept, be it lyrical or structural, I didn’t find it. There is, however, one ray of light, and that is Kristen Stewart’s performance. She is in practically every scene, and she was able to keep me interested. If you like Stewart, you will see her in a very strong performance, much stronger than the questionable screenplay deserves. If you don’t, Personal Shopper is not for you.