I’ll be honest: while I’d say that I enjoyed the majority of Marvel movies to date, the thing I’m least interested in is the fights. There are some fun, well-shot and -choreographed kerfuffles in the films, but on the whole I like them heroes less when they speak with their fists, repulsor beams and mythical hammers. What’s worse than a Marvel movie fight scene, though? A Marvel TV series fight scene. 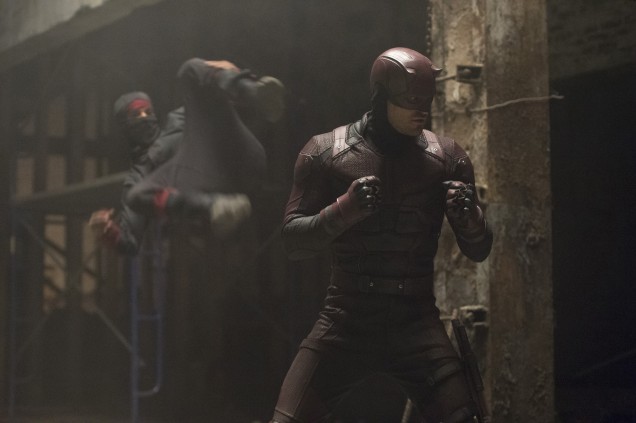 Okay, I’m exaggerating somewhat. The Marvel series on Netflix all had imaginative, exciting fights… but not that many. To be honest, by the time we saw Daredevil beat up his third band of undead ninjas (ninja? ninjae?), I was yawning, and Luke Cage didn’t exactly get more interesting either every time he rippled those biceps and threw some righteous punches. It didn’t much help that the central conflicts of both seasons of Daredevil (though the second more so) and of Luke Cage devolved into repetitive fisticuffs. At least the films have movie production values – the fights done on TV budgets quickly show their lack of production values and quickly look a bit, well, cheap without supremely creative choreography and cinematography. (Daredevil‘s arguably best fight came in its second episode already, which meant that everything that followed suffered by comparison, even before the ninjinsky.)

Jessica Jones did the clever thing by having a main character who was physically strong facing an antagonist that wouldn’t win any actual fights himself but who could use that strength against his opponent, making her a threat to pretty much everyone. The series’ central conflict wasn’t one that could be solved by punching things really hard, and Jessica’s abilities were as much a liability as they were an asset. This nicely complemented the character’s emotional make-up, with Jessica’s cynicism barely covering her feelings of guilt and shame at what she’d been made to do. While I wouldn’t want each superhero to be as messed up as Jessica, it made a great change from Daredevil’s often one-dimensional Catholic guilt.

Luke Cage, though? This one, at least to my mind, was a missed opportunity. There’s a lot of potential, from the more than able cast to the way the series mixes the styles of blaxploitation and themes plucked from today’s headlines, but in the end everything is wasted on a storyline that doesn’t know where to go and characters that remain largely static. Mike Colter is a charismatic actor who brings an intriguing physical presence to Cage, but the character is mostly wasted on generic reluctance of the “Why do I have to be a hero?” kind and samey fistfights. The rogues’ gallery has several aces up its sleeve with Alfre Woodard and Mahershala Ali but finally settles on a bad guy that wouldn’t be out of place in the worst kind of comic book but that doesn’t fit into, nor brings anything interesting to, a fictionalised Harlem that tries to stick close to present-day inner city reality in the themes it brings up.

Looking at almost any scene of Luke Cage, it’s easy to conclude that the makers at least had a clear, specific and apt visual style in mind. Nonetheless, watching an entire episode suggests that style isn’t quite enough, and a second episode only reinforces this impression: to make compelling serialised TV, you need to have a story to tell, and that was sorely lacking. The series’ plot reads like the result of a brainstorming session: corruption, politics, a new, sinister Harlem renaissance – but nothing really comes together, so instead of coherence we get punch-ups. Instead of a thematically resonant antagonist, we get a third-rate Samuel L. Jackson wannabe. Sadly, in the end the character of Luke Cage was probably served better by his subordinate role in Jessica Jones than by his own series.

Judging from the first footage of Iron Fist, I’m not exactly hopeful that it’ll get me out of my Marvel/Netflix slump. Once again, it seems that we’ll mainly get people pummeling each other, though this time with an oriental flavour – though for those who couldn’t handle a strong black protagonist, the hero is reassuringly white, which means I’m not expecting much in the way of thematic ambition or a story that goes much beyond “White dude proves to be better than anyone else at Martial Arts”. Here’s hoping that The Defenders will show that these heroes in combination prove to be more than the sum of the individual parts (as was the case with The Avengers, which made the less interesting characters work). But more than that, I’m hoping that the people at Marvel and Netflix realise that the small screen comes with a certain freedom to experiment and to do things differently – to be ambitious. Jessica Jones wasn’t without flaws, but it had something to say about toxic masculinity, female agency and survivor’s guilt. Luke Cage fell flat in the end, but it started out trying to view the superhero genre through an African American lens. In a world (and feel free to hear this in the Trailer Dude’s voice) where Marvel gets Ta-Nehisi Coates to write Black Panther, superhero stories would do well to aim somewhat higher than the nth retelling of “Dude punches other dudes good”.