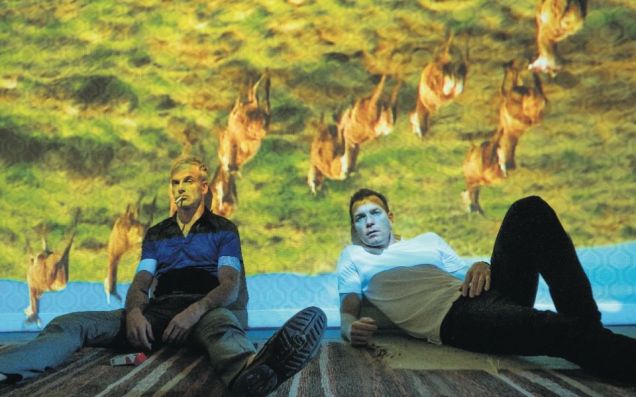 Why does Mark Renton return to Edinburgh 20 years later? I don’t know which reasons Irvine Welsh’s novels give, but Danny Boyle’s T2 Trainspotting lets us take our pick. I like that ambiguity – it keeps you guessing about the characters and about the story. Renton says he is here because his wife is going to divorce him. Could be, but we never see her. There is also the money he wants to give back to Sick Boy out of guilt. Sick Boy, still very blond, now runs his dead auntie’s run-down Leith pub and calls himself Simon. I have another theory: Renton simply remembers the best of times and the worst of times he had with Simon, Spud, Diane and maybe even Begbie, as depicted in the original Trainspotting (1996). Everything else since then wasn’t half as intense as those times 20 years ago, even if it almost killed him. 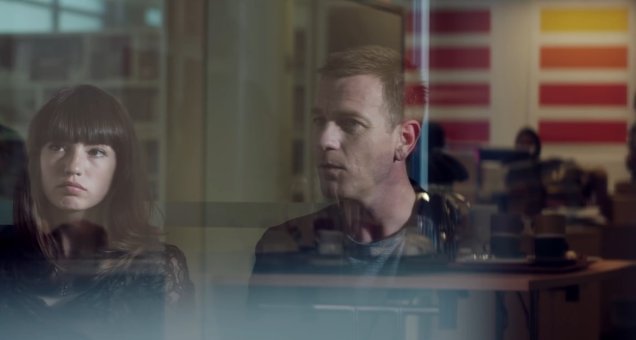 It would be very unfair to ask any part two to live up to its original, but this sequel here, I am sorry to say, needs more of a plot. Yes, yes, I can see how heroin addiction makes you live your miserable life from one moment to the next, so it’s perfectly reasonable that the original movie pretends like it doesn’t know where it’s going. That was part of its charm. The sequel, however, features a sober Renton, and Simon and Spud might still take drugs, but Simon is sober enough for orchestrating criminal endeavours, and Spud thinks about kicking his habit and writes down his life story. There should be some spurious plan in the movie as a whole, at least. Instead, we get two incredible coincidences to get it going: Renton knocks on Spud’s door just when Spud is about to kill himself, and Renton saves him. After 20 years, Renton’s timing is a miracle. And at the same time, as if he could sense Renton’s presence, Begbie breaks out of the prison hospital in order to enlist his son for his breaking and entering sprees. Why the unlikely coincidences? So that we have a movie with the old gang, that’s why. But plot? It’s swimming in there somewhere like a suppository in a toilet. They want to build a spa on the upper floor of Simon’s pub (and with spa, they mean brothel). They try getting the money with nicking credit cards, and when that doesn’t work, they apply for an EU business development grant. Really.

The original gave us a bunch of addicts who steal stuff to support their habit; the sequel shows us a bunch of small-time criminals who have never really bothered to quit taking drugs. Spud still takes heroin, Simon snorts coke, but other than that, they seem to function much better than in the late Eighties. So, does T2 make us see petty crime in a cool, favourable light then? Nope. For one, Boyle does no longer have that kind of irreverent, devil-may-care inventiveness that was so exciting in the original, although the movie hurtles along with the same reckless Bolye-esque speed as the original. There was such an abundance of ideas – remember the early football scene where Renton gets the ball to his forehead, he falls backwards and lands on the living-room carpet, heroin zipping through his veins? That inventiveness isn’t in the sequel. 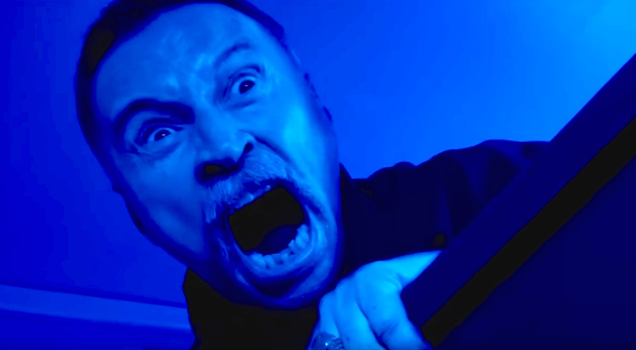 T2 uses a cheap trick to make us like it, and it pulls it a few times too many. It shows us short snaps from the original, for instance the moment when Renton is almost run over by a car and then grins that mad king-of-the-world grin at the driver. That scene is in the sequel, cut and pasted. As if that wasn’t enough, the older Renton gets chased again, rolls over the hood of a car and again grins that grin at the driver. And – get this – when Spud steps into the same street, he remembers that scene, and we hear echoes of it on the soundtrack. Three times the same iconic scene. It’s as if Danny Boyle’s directing or John Hodge’s screenplay don’t trust themselves fully and have to shoot some old scenes up its veins. Plus – there is a scene that looks just like it for a fourth time, but with the protagonists’ faces covered with some Snapchat emojis or whatever the cool kids use these days. The same goes for the music. The songs you will remember from this movie are the ones that are already in the original movie. Brian Eno, Lou Reed, Iggy Pop, they’re all there in T2, and like the recycled visuals, there are also cover versions of those same songs in that same movie. I am sorry, Young Fathers, but it’s the old soundtrack that I will remember, if only I had to listen to some of the songs twice over. There is, of course, also a speech about choosing life, but it’s a rehash, but if there wasn’t any such speech, I am sure I would have missed it. 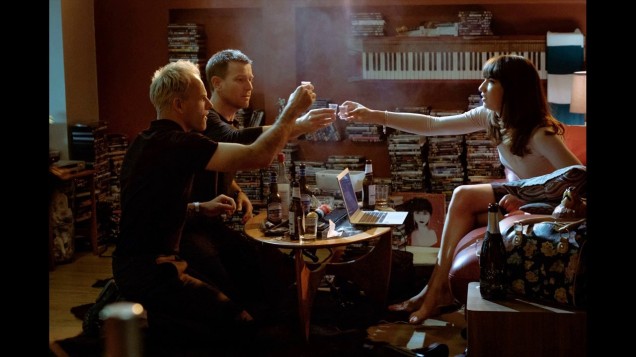 Ok, it’s time to stop listing the negative points and tell you what the movie does right. I am going to start with Veronika, who we see first as the prostitute who helps Simon blackmail her johns. She is played by Anjela Nedyalkova, and while her role is thankless, she makes the best out of it. And it is she who finds the homepage for the EU grant. She is the smartest person in the movie, with a head for business, but also street smarts. It’s clear that Renton falls for her.

Spud’s story is one of the funniest of the whole movie: he was too late for his divorce proceedings, for his job interviews, and for his job center appointments – he lost absolutely everyone and everything until someone told him there was something like daylight saving time. He was one hour too late to every meeting for a whole summer. He tries to commit suicide, pukes all over his savior Renton, goes cold turkey and then starts writing short stories. Of course these sound exactly like Welsh’s novels. Begbie has his best moment when he wants to beat up Spud because that fool has written down stuff that could prolong Begbie’s jail time, but as soon as he makes Spud read out some of the text, he likes it, because it is all about him.

The best scene of the movie involves Renton and Simon entering a dance hall where some militant protestants do their singing and dancing and drinking by remembering the Battle of the Boyne. Renton and Simon swipe all the credit cards they can lay their hands on, but are prevented from leaving unless they sing a song. How they improvise their way out of that place is the highlight of the movie. And then they get all the cash from the cash machines by using them before midnight, and then after midnight because the limit has gone back up. And they know the code to most of the cards. Clever. I never thought of that this way. This is an ingenious moment in an otherwise mediocre movie. 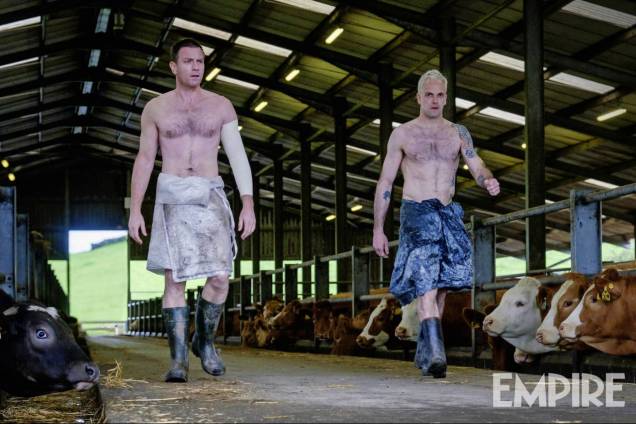 Allison is gone, Swanney is dead, Mickey is a fence for stolen goods. Other people are underused. Shirley Henderson has only one line in the movie, but there are rumors that she lost her voice shortly before shooting began. Kelly Macdonald is now an uptight corporate lawyer, a role that the young Diane would never have foreseen for herself. She is underused, but she has the best line in the whole movie. She has one look at Veronika and tells Renton: “She is too young for you.” Renton will remember that one for a long time.

In many ways T2 Trainspotting feels like a class reunion. You once shared a lot of time, a whole chunk of subculture, such as music, fashion, literature, world-views, secrets, flats, cars, money, maybe body fluids. You go to your class reunion, and you are elated for the first half hour to see all those faces again. Then you realize something has changed: they have, you have, everything has changed. You sober up, you talk, you compare, you think about making stuff up to come away better than you are, and it all turns into a gigantic deja-vu fest, and you realize that you might not have changed at all, that you have aged, just like everybody else, and that, oh my God, you are a bit boring. But so are the others. When you move back with your dad into your old room where once you saw a dead baby crawl along the ceiling towards you, you’ve got a big problem, and you are no longer cool at all.