Lynne Ramsay’s You Were Never Really Here could have been made in the late Sixties, with John Wayne or Lee Marvin, or in the Eighties with Russell Crowe. Ramsay’s movie is based on a 2013 novella by Jonathan Ames, but it could also be based on a story by Jim Thompson from the Fifties. I understand the comparisons with Taxi Driver, since both movies are about traumatized outsiders confronted with violence (a lot of it their own), but You Were Never Really Here is pared down to a taut 90 minutes. Everything that does not belong to the story is not in there. Ramsay’s screenplay tells a lean, mean tale that would be ruined with too much dialogue or too much exposition. Three out of her four movies have literary origins, and she always films her own screenplays. Lynne Ramsay knows what she wants to say, and how to say it.

Travis Bickle tried to get out of his shell and find a girlfriend, no matter how clumsy his courtship was; such a thing is completely out of the question for Joe, who is deeply scarred by his war memories. Ramsay doesn’t overstate Joe’s backstory, but presents it in short, repeated, steadily extending flashbacks. These days, Joe is busy freeing underage girls from a sex trafficking ring, and he goes about his work by all means necessary. We see him buy a high-end hammer for every new job. It’s a kind of work that absolutely no-one else but him could do. Joe doesn’t mind because he has essentially shut down emotionally. That is why he is so successful at his job. Sometimes he sees suicide as a threat, sometimes as a solution, and the next moment, you find him contemplating a green Skittle.

The movie doesn’t over-psychoanalyse Joe, either. He is mostly silent, and his most frequent answer is What?, because his mind is elsewhere, or maybe he’s busy listening to the noise inside his head. His only attempts at a normal life are when he is taking care of his frail old mother, played by Judith Roberts, whom you might remember from Orange Is The New Black. Mum thinks it’s hilarious to play dead when Joe comes around to look after her. It’s a good thing Joe doesn’t scare that way. It’s the only funny scene in the movie, and it’s not really funny at all, if you think about it.

There is a strange paradox at the center of the film. We either see Joe or we see what he sees. Lynne Ramsay films him in such tight frames that it feels like we are sometimes there with him, in the same car, in the same room, that it’s hard not to feel trapped with him, and as soon as he is using violence, the movie makes us accomplices. The other side is this: since Joaquin Phoenix gives such a good performance, Joe seems to dissolve before our very eyes. I can’t really explain why, and it is all the more surprising because Joe seems to be such a doughy hunk, folded back into himself. Phoenix has played psychologically damaged men before, most of all in Paul Thomas Anderson’s movies Inherent Vice (2014) and even more so in The Master (2012). He is even better here. He is always dressed in black, with a scraggly beard, muttering admonishions to himself. There is a moment where he sits down in front of a shuttered high street shop, and he immediately passes for homeless. 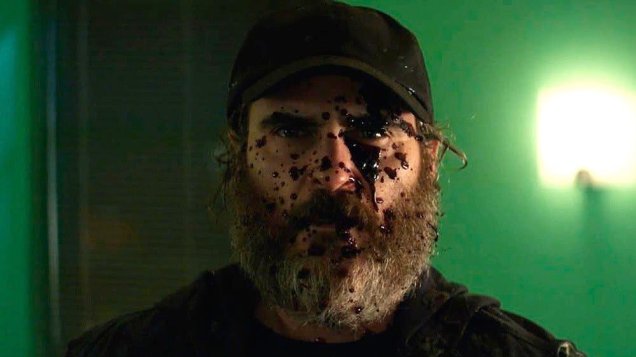 For a movie about a suicidal guy who uses hammers to free girls from brothels, there is not much violence. Some of it might not come from the blood, but from how Joe’s presence undeniably means life or death – life to the girls, death to their johns and pimps. There is a moment in the movie where Joe, in the middle of a hammer job, is lying on the floor, a dying bodyguard beside him. They join hands. That scene could have gone wrong, but here, it works. Dying seems to be a state of being that Joe understands instinctively.