We all know what the past looks like. Go back a hundred years, and the world was black and white, sped up and weirdly jerky. People talked in ornate title cards – which was lucky, because how else could you hold a conversation over the din of a dramatic piano score? Philip Larkin once wrote that sexual intercourse began in 1963; it seems that sound and colour began before that, but not by all that much, compared to the history of the world. It is strange to think that two entire world wars were fought entirely in monochrome.

I’m joking, obviously, and feebly at that – but our perception of the past is coloured (badum tish!) by the look, sound and feel of the records we have of this past. Look at the common visual shorthands cinema has provided us with, where we look at blurry footage with a yellowish tint and we know we must be somewhere in the ’60s. In fact, I’d go so far as to say that if a historical film doesn’t look the way we expect it to look, we tend to be irritated. Michael Mann’s Public Enemies wasn’t an altogether brilliant film, but the most aggressive flak it received was for its use of digital cinematography. We’re conditioned to expect gangster movies set in the past to have a painterly, Gordon Willis-type look, while Mann’s film looked aggressively contemporary. The director obviously knew what he was doing, but I doubt he knew just how hostile the audience would be to a film whose visual style simply wasn’t how the past is supposed to look according to the School of Cinema.

There’s a lot that could be discussed concerning Peter Jackson’s They Shall Not Grow Old (which came out on the centenary of Armistice Day), from various perspectives, but there is one thing that stands out in particular, namely the way it makes the First World War look not like a historical artefact so much as it renders it contemporary in visual terms. Its folksy tone and focus on the way ‘the common man’ experienced the First World War’s trench warfare is far from unusual (and could easily be criticised), but Jackson’s use of modern post-production tools to change the original, early 20th century footage is striking. Where earlier attempts at colourising black and white footage would look kitschy and garish, WingNut Films aimed at a realistic, contemporary look and feel, minimising the distancing effect that comes with the original footage’s lack of colour and the framerate of 13 frames per second (which I personally associate most with old slapstick movies). 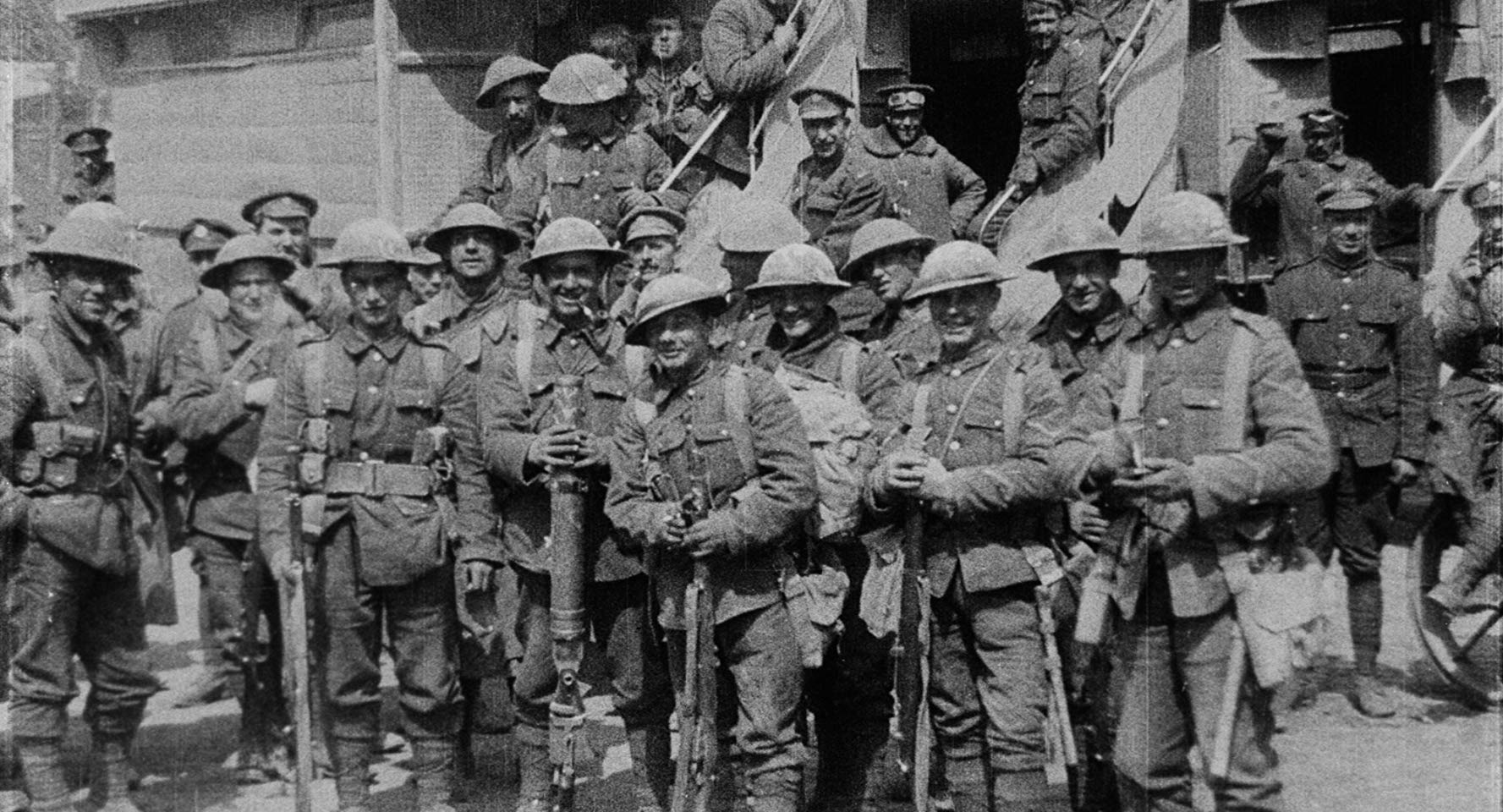 And, frankly, Jackson’s visual effects wizards have done an amazing job. They Shall Not Grow Old lulls us with its first ten, fifteen minutes, showing us exactly the kind of black and white footage we’re used to, but once the war begins, the jittery, blurry, monochrome footage shifts, filling the entire frame; cheeks become rosy, uniforms take on a khaki tint, skies take on that familiar blue – and blood is startlingly red. It’s not only the largely realistic colours that strip away the historical filter from the footage: it’s also the interpolated frames, which give the material a very different feel. At first the footage looks too smooth, but it’s not the soapy telenovela smoothness you get when your TV is set to generating in-between frames – it’s simply that images that always looked old to us in very specific ways suddenly come across as lifelike (to an extent that doesn’t really come across in stills) and therefore less mediated than they were in their original form.

The conversion isn’t always perfect: though often the colours look convincing, sometimes they do take on the tint of old colour photos from the ’60s or ’70s. More disconcertingly, occasionally faces almost seem to melt as They Shall Not Grow Old zooms in on the archive footage. (I assume this is due to the original film stock having deteriorated or the original grain only preserving so much detail, and such artefacts are amplified by the process of interpolation.) At times it’s difficult not to think of the infantrymen on screen as enbalmed by the visual processing – which may be quite fitting, because even if the soldiers portrayed weren’t killed by the war, they are all likely to have died by now.

When the film works best, though, it succeeds at closing the gap between us and them: the more these soldiers look like us, move like us, indeed sound like us (Jackson’s team used linguists, lipreaders and voice actors to provide voices where before we could only guess at the words the soldiers were speaking), the easier it is to identify with them. The film turns them from historical artefacts into actual, living people – which in turn also makes it feel more real when Jackson chooses to show us the wounded and dead strewn on the battlefield. These were people who lived and who died – which seems obvious, but cognitively and emotionally it makes a difference to be looking at them without us having to squint through the historical filter.

That lack of filter is an illusion, though, and the film’s supposedly direct access to the men who fought and died in the war is at least partly fiction – and this is where my problems with They Shall Not Grow Old begin, because other than in its technical accomplishments the documentary is highly conventional. In its look and feel, it signals, “This is real!”, but Jackson’s selection of footage and especially statements from actual WW1 veterans, the editing and overall structure of the film, they all serve to tell a very specific story: the good, salt-of-the-earth British infantryman, the common man, ground up by the machinery of war and the machinations of international politics. It is the version of WW1 beloved by the Brits in particular, in which war is hell, all soldiers are essentially brothers and everyone’s a victim. This is not an inherently wrong approach, but there is something cosy, for want of a better word, about how simple and straightforward this version of the war is. It’s the WW1 of plastic poppies and football matches between the trenches. It’s the WW1 where the antagonist is War itself and no one is responsible for their actions. There are moments of ambiguity and nuance in how They Shall Not Grow Old juxtapose statements about how the war was one great boy’s adventure with others about its abject horror and ongoing trauma, and stories of fraternisation with others of cavalier killings of the enemy, but these are rare.

They Shall Not Grow Old has many merits, not least that of reminding us that the First World War wasn’t something that happened in ancient times, like the siege of Troy or the battle of Agincourt. A hundred years may seem like an eternity, but there are still people who lived through the war. These are the parents and grandparents of our own parents. Its endeavour to make the past look like the present shouldn’t be mistaken for any greater realism, though. The visual filters of the historical artefact may have been stripped away, but other filters – perspective, nationality, culture, sentiment – are no less real just because they’re invisible. Peter Jackson tells compelling stories of WW1 in They Shall Not Grow Old, but it would be a shame if those stories were seen as the only reality of the war because they’re presented in a way that our eyes have been trained, by the storytellers of cinema as much as by our own experiences, to identify as real.

One thought on “In living, dying and killing colour”