I’ve written about it before: as much as I love virtual reality and its sense of immersion, we haven’t quite arrived at the holodeck yet. You can’t really touch things, though with the right kind of controllers implemented well it’s amazing how well you can fool your brain into believing that you’re actually holding that floppy disk, handgun or lightsaber in VR. However, what is much more difficult, at least in the comfort of your home, is walking. Sure, you can walk a few steps depending on how much space you have, but after more than a metre or two you’re likely to bang into a wall. And since few people live in empty warehouses or vast, echoing halls, not to mention the cable by which you’re generally attached to the PC, developers generally have to find workarounds.

The easiest but lamest solution is to stick the player where they don’t need to move, but that’s not really what we want out of virtual reality (“Be a statue in VR!”). The next best, somewhat boring and for some people nauseating solution is: you walk around by pressing a stick on your controller. It works, sure, but it’s basically identical to what you’d do in a non-VR game. It is an abstraction, and gamers are used to abstractions, because that’s what games have been for decades. You do things in games by pressing buttons and by pushing sticks, actions that are entirely unlike what your characters end up doing. Load a gun? Push a button. Draw an arrow? Push a button. Open a door? Push a button.

VR, on the other hand, is all about making things non-abstract: you look around by looking around, you grab something by grabbing it – but often you walk by… pressing a stick. Then there’s teleportation, which also works well, but it too is abstract. You move around jumping from one place to the next by pushing a button. If the game you’re playing is sci-fi, at least you can provide some sort of fancy tech reason why you’re able to move without actually moving, but in any other kind of setting your sense of immersion suffers at least somewhat.

One of the cool things about this current VR generation is that it’s pretty much the frontier out there. No one knows what works and what doesn’t, so people have to be inventive and throw whole pots worth of spaghetti at the wall. There are lots of developers and hobbyists experimenting in order to find solutions to such issues, some of which are outlandish and elaborate, some surprisingly simple. There are several omnidirectional treadmills in development that translate your movement into in-game movement, but it seems that they all feel less like walking than like sliding or moonwalking – and unless you’re playing the Michael Jackson VR Experience, that may not be what you’re looking for.

The Spanish developer Myou has been working on what they call Natural Locomotion, and for now their trick is this: they translate the swing of your arms into movement commands. If you walk in place, swinging your arms (in an admittedly somewhat exaggerated manner), your character in VR walks at the speed and rhythm your arms move. It sounds strange, and I expect it looks even stranger (if my wife has walked in on me Natural Locomoving around, she hasn’t said yet, but I suspect I would’ve heard her laughter even through the VR headset’s headphones) – but strangely, it works. Not perfectly, not without a bit of getting used to it, but it works. 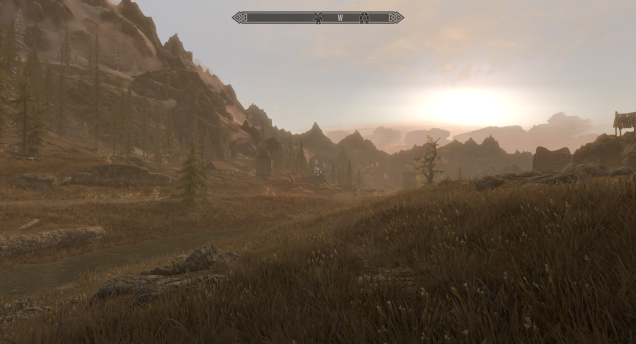 And this is where it gets weird and interesting: it doesn’t just work, it makes a difference to how I perceive distances and therefore the locations I travers in VR. How do we comprehend distances? We see how far something is away, certainly, and we see how our position changes as we move, but I think that we experience distance most when walking, because our entire body takes part in the process. Otherwise we’re just watching a movie depicting movement. We measure the world by our own, physical steps. I’ve been playing the vikings-and-dragons roleplaying game Skyrim, which is available as a VR version, and it is pretty much an epic walking simulator for the ages. I had previously played the non-VR version of the game, several times even, and it is famous for its grand, epic world: supposedly the land of Skyrim corresponds to an area of 16 square miles. (In real-world terms, 16 square miles isn’t amazing, but if you’re hunting dwagons, sneaking through knee-high grass, it’s quite the world.) However, if you push a button or press a stick, it doesn’t much matter if it takes you several minutes from A to B. Distance is simply expressed in duration: it takes your character X minutes to get from one place to the next. It’s not so much you doing it as it is something being done to you. Bring the somewhat clunky Natural Locomotion into the mix, and duration becomes something more physical: you emerge from a dungeon and it takes you a few hundred steps until you arrive at the nearby village Riverwood. The 7000 steps to up the mountain slope to High Hrothgar… well, no, that number was always a semi-mythological exaggeration, otherwise scores of tourists would go and take selfies with the ancient order of Greybeards, but it is over 700 steps. Finally gaming has its equal of those damn stairs at Covent Garden!

A lot of my favourite VR experiences have been, or at least felt, considerably more physical than your average gaming session. In VR, I can work up a sweat, which is rare when it’s just my thumbs moving sticks and pressing buttons, no matter how frantic the action on screen. We haven’t yet arrived at a point where computers can simulate an entire world that we inhabit like we inhabit this world, senses, limbs and all. We never may arrive there. But at the price of a computer, a by now quite reasonably priced set of VR gear and our dignity, we can finally make that arduous trek up those 7000 (or, more accurately, 732) steps and take that selfie with a Greybeard ourselves. I would walk 500 miles for that.

One thought on “These goggles are made for walking”