Three women: a queen, fragile of body and mind. Her confidante, advisor and lover, ready to do what it takes to protect her monarch and her country – however much pain it will cause. And then there’s the social climber who, willing to do anything so she’s no longer a victim, tears them apart.

With its elaborate historical settings, the architecture, costumes and ridiculous wiggery of English Baroque, The Favourite may look different at a first glance from the drab contemporary anonymity of Yorgos Lanthimos’ Dogtooth, The Lobster or The Killing of a Sacred Deer, but the early 18th century of Queen Anne’s reign is remarkably similar to the world of his other films. Human relationships are subject to absurd yet unquestioned societal rules, there are complex power games, and in the end it doesn’t matter all that much whether you break the rules or follow them, whether you win or lose: these games are not designed to make anyone happy. Instead, people make themselves and each other unhappy as some try to conform and others strive to dominate – because to find yourself on the bottom rung of the ladder is unthinkable.

This may not sound particularly appealing, and as with Lanthimos’ other films the audience is unlikely to find themselves wanting to inhabit the world he depicts. At the same time, the director is keenly attuned to the absurdity of society, and anyone who finds access to his particular set of frequencies can find a goldmine of bleak humour in the films – or at least some of them. I found myself laughing a lot when I watched The Lobster (read here for Mege’s take on the film), and the even bleaker Dogtooth also offered the kind of hilarity sharp enough to cut yourself on, but I didn’t find much to laugh about in The Killing of a Sacred Deer, in which Lanthimos’ detached absurdism felt too much like sadism to me.

While there is sadism in The Favourite, the film itself isn’t, and that’s largely due to Lanthimos allowing for one change in comparison to his earlier films. Usually, he has his actors deliver their lines in an affectless way, making them appear bland and outright blank even when the things they say call for the strongest emotions. The delivery adds to the absurdity of Lanthimos’ scenarios, creating an alienation effect akin to the theatre of Bertolt Brecht. When it works, it is highly effective, as the director doesn’t permit his audiences the comfort of sentimentalizing what they’re seeing. In The Killing of a Sacred Deer, though, I found that the technique worked against the film, as the overall effect was that none of the characters care about the horrible things happening to them – and if they don’t care, why should I? By the time the blank façade showed enough tears for the underlying emotions to show through, I had largely disengaged from the horrific goings-on on the screen.

In The Favourite, the director allows his cast, in particular his outstanding three leads (Olivia Colman, Rachel Weisz and Emma Stone), to be much more expressive than previous Lanthimos characters. They express fury, anguish, possessiveness, and many more emotions – but the film never becomes sentimental in its depiction of strong sentiment, nor does it lose the sharply comic sense of absurdity that comes with the court under the supposed rule of a troubled, unstable monarch. The courtiers, manipulators and powermongers that surround Queen Anne and the games that they play are no less ridiculous than the social games of The Lobster’s loners anxious to pair off in order to avoid a fate worse than death. 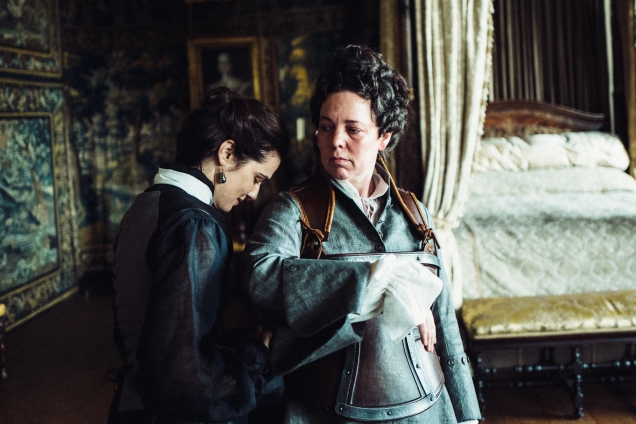 Under Lanthimos’ direction but freed from some of the formal constraints of his earlier films, the core trio of Queen Anne (Colman), Lady Sarah (Weisz) and Abigail (Stone) gain a tragic dimension that complements the director’s sensitivities well. Although Colman was nominated for a Best Actress award at the 2019 Oscars while Weisz and Stone were nominated in the Best Supporting Actress category, all three really share the lead; they make for one of the most perfect, and perfectly complementary, ensembles I can remember in recent films.

The Favourite is perhaps the most purely enjoyable film that Lanthimos has made. It is easier for the audience to distance themselves from the emotional cruelty his characters inflict on each other and enjoy the savage wit when those characters are Baroque nobility, but Lanthimos and his cast more than succeed in making these characters and their world funny, frightening and deeply human. The world they depict is a cruel one, but the film succeeds in no small part because it doesn’t itself succumb to the same unfeeling cruelty. Don’t let that fool you into thinking that the god of The Favourite is a kinder, more caring deity, though: by the time the last scene comes around, The Favourite has made it clear that with the kind of games Lanthimos is fascinated by, there aren’t ever any winners.