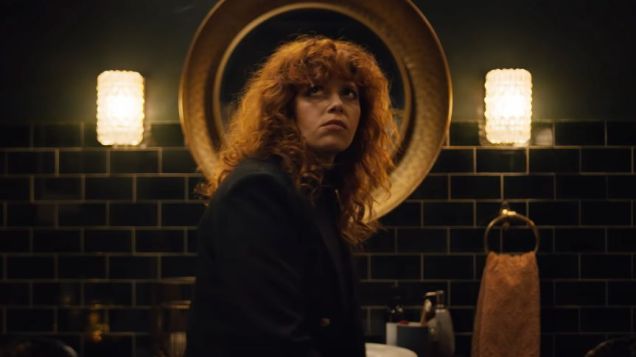 There is a multi-layered irony at work in Russian Doll. To start with, it’s almost as if they airlifted Nicky Nichols out of Orange Is The New Black and gave her a series of her own. What happens in Russian Doll could, in fact, easily be Nicky’s alternate backstory: the protagonist in it, Nadia Vulvokov, is just as sharp-witted and foul-mouthed as Nicky. And then of course, both Nadja and Nicky are played by the same actress, Natasha Lyonne, who must be wholly unafraid of being typecast. Both Nadja and Nicky say what they want and do what they want, and they choose the man or woman they want to have sex with. They both have a drug problem, but Lyonne manages to keep it interesting.

That is all very technical praise, so let me start again. Nadja is in the high-end bathroom of her best friend Maxine’s apartment, splashing water into her face, staring into the mirror. It’s her birthday. She joins the party but doesn’t really want to be the center of attention. She sees a guy who she thinks is a bit of a dick, but gets to like him. They leave for a quickie, but on the way there Nadja gets run over by a cab. And she, well… wakes again in the same bathroom at the same point in time.

And if after Nadja’s fourth or thirteenth death, this all reminds you of Groundhog Day, well, yes, the series premiered on Februar 1st, one day before Groundhog Day, so kudos to you for sniffing that one out. It’s strange to complain that Russian Doll is somehow a rip-off of the movie. I get the ripping-off part because it is really a rip-off, but why complain? Plot devices are not the prime sign of quality in any story, it’s really what you do with it. Has anyone ever complained about boy meets girl, about rags to riches, or about fish out of water?

And the repetitions are well-paced in this series. Nadja is able to travel through the same day with more and more assuredness, although she has to avoid stairwells like the plague. Eventually, she realizes that the homeless guy in the park has something to do with her plight, and suddenly, there is another guy who is stuck in the same time-loop, the straitlaced Alan, played by Charlie Barnett. The Nadja storyline is more interesting than the ending, and there is not really a need for a second season, but I can see how an audience would want to see more of characters such as Nicky or Nadja. One series cannot contain them.

One thought on “Déjà-Vu is the new Orange”