Markus Imhoof’s early feature film Das Boot ist voll (The Boat is Full) from 1981 was an immediate success. It won prizes at the Berlinale in 1981 and got nominated for an Oscar for Best Foreign Language Film a year later, but didn’t win. It made waves at the box office, and it still turns up on many top ten lists of best Swiss movies, and rightly so. The title is a cowardly statement by a leading Swiss politician about the refugee situation in Switzerland during the Second World War. The movie is about six refugees who jump off a train going to Nazi Germany, trying to find shelter and safety on the other side of the border in Switzerland. Three of them are children, but there is also a spirited woman named Judith Krüger who is looking for her husband who is in a detention facility somewhere in this country. There is an old man named Lazar Ostrowskij who has lost his wife during the escape attempt from the train, and since he can no longer be a husband, he is a grand-dad to the three children, although it’s hard to remember who is related to who. The sixth refugee is a deserting German soldier, and the other five are reluctant to be in the same room with him. Judith Krüger soon realises that they have to reshuffle their relationships in order to pass for a real family so they can either stay in Switzerland or get transit visas.

They are taken in by a woman who, together with her husband, runs an inn in a small rural village. They are afraid that the local cop will find the refugees, but they are also afraid to what will happen to them if they are found to hide the small group. The mayor is of no help, and it takes the couple a long time to drop their prejudices and to realise that these six people are in need of help, and not a threat. Somehow, word gets out, and before long, the village lets its judgement rain down on their heads. The cop figures out that they are not really related at all, and that they will have to face their sentence. If they are political refugees, they get asylum, if they are racial refugess, they will be sent back to Nazi Germany and to certain death. It’s a well-made movie, but it’s bleak and relentless. It feels far too real for comfort or any false sentimentality.

The film is based on a book of essays and reportages by Alfred A. Häsler, a Swiss writer and journalist who was a distinct critical voice of the strict Swiss immigration policy until his death in 2009. It really doesn’t matter if the movie is based on a true story (it isn’t); the strongest point of the movie is that these stories, although fictional, have happened many times over, with a sickening similarity, repeated again and again. There are scenes of casual, unthinking antisemitism in the movie, perpetrated not only by those who want the strangers gone or captured, but also by those who want to help them. There is not one single character in the film who approaches them with an open mind. Imhoof took some criticism for that negative portrayal, but again, the majority was afraid and cowardly or even outspokenly racist, while other, courageous people hid Jews and other refugees at great risk to themselves, no matter what the official policy.

Judith Krüger is played by Tina Engel, and even if you don’t remember her name, you might remember the woman at the very beginning of Volker Schlöndorff’s Tin Drum (1979) who hides an escaped arsonist under her many skirts. Ostrowskij is played by Curt Bois, who had a career not only in Germany, but also in Hollywood, where he got to play the pickpocket in Casablanca (1942). He ended his career with Wim Wenders’ Wings of Desire (1987) playing Homer. The innkeeper is played by Matthias Gnädinger, one of the most known and most prolific Swiss actors.

In an indirect way, Imhoof has returned to the theme of asylum and refugees with his latest film, a documentary called Eldorado. It was released last year, but it took Imhoof four years to make. Timing was very much on his side: he started shooting the doc aboard the ships of the Mare Nostrum initiative, an EU-financed program tasked with rescuing refugees from their overcrowded boats on the Mediterranean. Such footage is a mere impossibility today since the EU has banned all information about Mare Nostrum to be published in any way. In that sense, and without Imhoof’s intention, Eldorado is a unique record of how some Africans are treated while they are saved from getting shipwrecked or drowning. There are long shots of exhausted, traumatised people sitting in neat rows, barely able to stand up or stay conscious. This is the way we now treat people who are said to be a threat to us and our wealth and way of life. What are we afraid of?

In a sense, being saved is an entirely wrong designation because most likely, those people get to live in the direst conditions in refugee camps in southern Italy or elsewhere, where they will have to work for a ridiculous wage, just to pick tomatoes which get canned and sold to Africa. Europe is exploiting Africa doubly that way. In the camps themselves, violence and despair are rampant, and gangs extort the weakest. After nightfall, Italian men line up to pay for sex with female refugees. 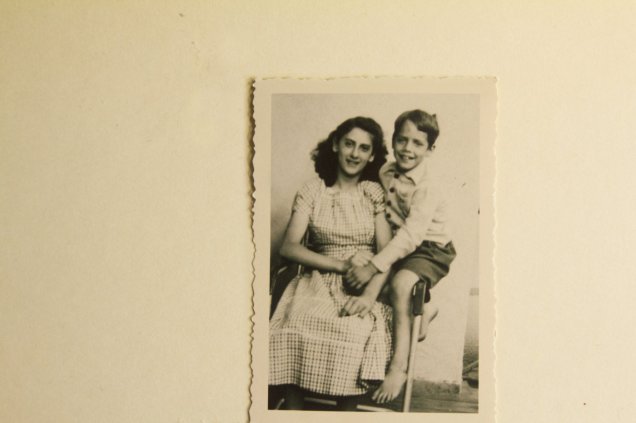 Imhoof bridges the gap between the present-day story of Eldorado and the historical stories of Das Boot ist Voll with short bits and voice-overs in the documentary addressed to Giovanna, an Italian refugee child who lived with the Imhoofs towards the end of the war. It’s there, I think, to show that the refugees then and the refugees now have a similar, if not the same plight, no matter what the official policy of the day may state. Imhoof has mentioned more than once in interviews that it is a curious fact that, although Mare Nostrum is financed by every European taxpayer, there is no way to get any information about the program. Eldorado is all we have about that.