It’s when I first saw the alien whales that everything fell into place. 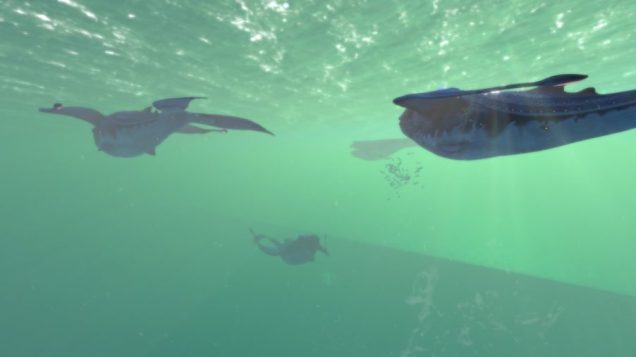 Video game genres and their popularity seem to move in waves. For half a dozen years, every second game seems to be a militaristic first-person shooter straight out of Michael Bay Land. Then you get half a decade (at least!) where it seems that you couldn’t launch a game without some undead dude nibbling at your heel. One of the more surprising trends of the last ten years or so was survival games, which would put you in an environment where you’d have to find food and resources, build shelter, craft tools and defend yourself against the often aggressive fauna (and sometimes flora) of post-apocalyptic hellscapes or untamed wilderness.

One of the survival games that received most acclaim is Subnautica, which became available in an early version in 2014 and finally received an official release in 2018. Its premise is pretty much the premise of every survival game: you’re stranded in a dangerous environment, in this case an alien planet, which you need to explore – and, as importantly, survive – in order to make your escape. As the title suggests, though, the world where you’ve crashed is an ocean planet… and that makes a huge difference. Most worlds in survival games are essentially two-dimensional; you might have hills, valleys, cliffs and mountains, but you still move along the ground. The ocean of Subnautica is an inherently three-dimensional environment, however, with your lifepod floating on the surface and everything that matters in the game being below. 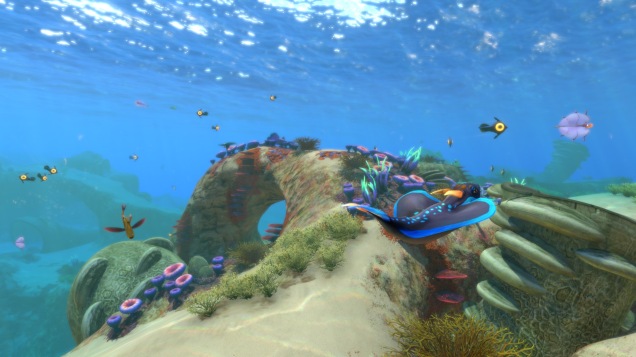 In Subnautica, it’s decidedly not better down where it’s wetter in many respects. Your oxygen is limited, especially at the beginning, and some of the somewhat goofy-looking denizens of the deep have big, sharp teeth. At the same time, it’s strange how rarely games put you underwater (at least games in 3D, because jump’n’run games loved their water levels), because it is a gorgeous environment to explore.

Doubly so in Virtual Reality, triply so in Subnautica, quadruply so after sunset – and quintuply so when you swim through the murk, looking for a bladderfish that you can cook and eat in your lifepod, and suddenly you hear the plaintive melodies of whale song, and two or three faintly behemoths emerge from the darkness, the barnacles (are they barnacles? sensory organs? egg sacs? or something else altogether? I’m not totally au fait with alien zoology) on their enormous backs glowing a greenish yellow. 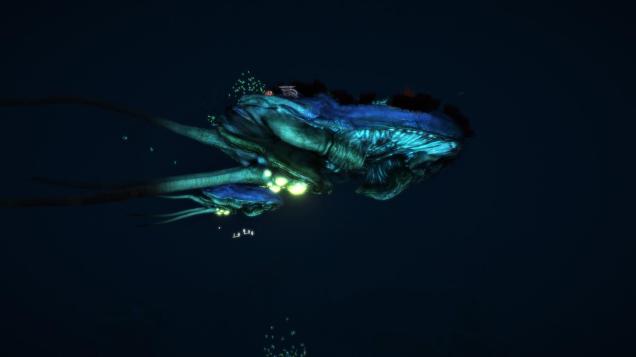 Once again it’s the physical aspect that makes VR so much more immersive for me. Subnautica is certainly beautiful on a regular screen too, but when you have to turn your neck rather than move a mouse a few centimetres in order to look from a gigantic creature’s head to its tail, when you swim underneath one of them and look up as its shadow falls on you: the effect this has on your brain is that you perceive the creatures you encounter in VR not just as graphics but as actual physical objects that take up space.

And this brings us back to the three-dimensionality of oceans: when I traverse the environment of Subnautica in VR, when I swim between undulating fronds and peek into underwater caves, I look both up and down. I look downwards to see mineral deposits on the ocean floor and debris from my ship that I might be able to repurpose into something other than titanium trash, or to follow a glowing fish into a crevice as it ducks from me, knowing that I intend for it to be my dinner. As I swim down to the ocean floor, I hear the telltale electronic beep informing me that I’ve only got thirty seconds of air supply left in my oxygen tank. I look up, see the sunlight filtering through the waves… and I see that the surface is further away than I thought. Distracted by the game’s life aquatic, I ventured too far, too deep. I look up and swim towards the light, trying to will myself to go faster. As I run out of oxygen and my vision darkens, I’m still looking upwards, hoping that I will make it before I black out. 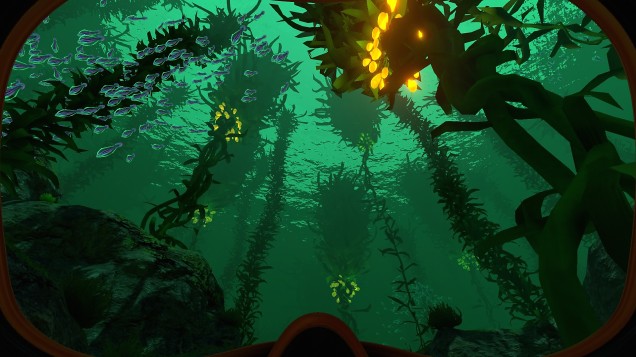 And then I burst through the surface and gasp for air (Subnautica is kind in that it allows you to breathe the air of this alien world). I fill my lungs, but I’m already thinking about diving down again, because down there are the whales, and even if I will die on this strange, distant world, I will die while swimming with whales, and there are worse ways to die in video games than like that.