Road movies are, in a way, like interconnected short story collections, no? You learn of a reason to take to the road – first story. You get to another place because it’s the way to get to your destination – second story. And another place, and another, a seemingly random sequence of loci, until you reach your destination, which makes for your last short story. Yeah, I know, my analogy holds up only roughly, but my point is: there should be an arc from the first to the last story, otherwise you get accused of fillers. And no-one, no filmmaker, no author, wants to get accused of producing fillers.

So here is Sebastian Schipper’s simple-named Roads, starring Fionn Whitehead, Stéphane Bak and Ben Chaplin. Gyllen (Whitehead) escapes his dreary family holiday in Morocco by stealing his parents’ camper van while William (Bak) has travelled all the way from the Congo to go see his brother who has gone missing in Spain. Both young men, in their different ways, are on the road illegally. 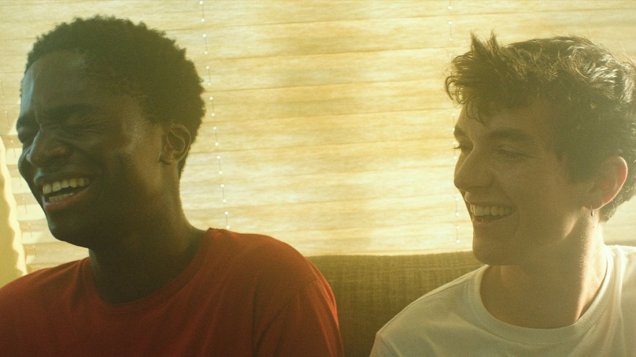 I can’t really recommend the movie. Schipper used to be a Tom Tykwer regular (he played one of the main roles in 3 and had a cameo as a cop in Run Lola Run) and has made a watchable one-shot movie called Victoria (2015). Roads is sort of aimless. Eventually, we will see William’s reunion with his brother, but all the other plot points are clearly weaker. Gyllen does not only suffer from Whitehead’s average performance, but also from moments where it’s clear that his father (Chaplin) hits his pregnant stepmother. Gyllen and William walk away from the abuse although they are clearly within earshot. They have no reaction to the abuse, and neither has the movie.

There is also a moment where they steal some weed from a hippie, played by Moritz Bleibtreu, another Tykwer regular, whose whacky performance is perhaps the highlight of the film. They are on the run, which gives the movie some extra drive it sorely needed, but the hippie doesn’t turn up again, another symptom of the story’s aimlessness. I wouldn’t mind a film that is happily trundling along without any rush to get to its final moments – if the episodes before them hold up on their own. Roads is not that movie.