END_OF_DOCUMENT_TOKEN_TO_BE_REPLACED

Cinema loves end-of-the-world tales – but then, who doesn’t? Who doesn’t get a big dose of endorphins out of watching zombie hordes ravaging mankind, asteroids punching holes through our planet, or killer chickens devouring us in revenge for kazillions of McNuggets? (Apparently we taste especially good with secret sauce.)

Obviously there’s a certain potency in telling stories of the end of the world that’s difficult to come by when what’s at stake is much smaller. End of your village? Your high school? Your local Tesco’s? Doesn’t quite pack the same punch as the potential end of everyone you ever loved, hated, sat next to in maths classes, bought frozen peas from.

The main problem with Fernando Mereilles’ Blindness is that it doesn’t just want to tell a story about an almost-apocalypse. It wants to have meaning beyond that generated by its story and the plight of its characters. It wants to be symbolic, too, and literary, which isn’t surprising as the film is based on a novel by Portuguese Nobel Laureate José Saramago. Unfortunately the story doesn’t carry the weight of some deeper, symbolic meaning. As a tale of a Very Special Apocalypse it works well enough, in a depressing Lars von Triery way, but it fails to live up to its own ambitions to such an extent, it risks turning the audience against itself. I’m always willing to feel empathy for fictional characters, like the bleeding heart liberal literature lover that I am, but I found myself getting annoyed with the way the film managed to escalate the sheer horridness of its scenario over and over again, mistaking misery for depth. 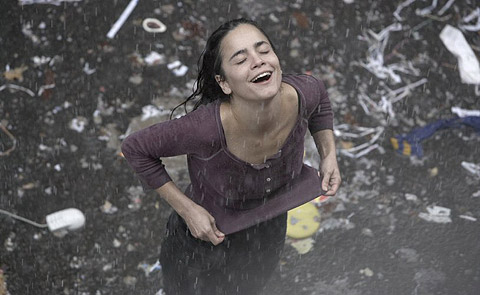 It’s a shame, because there’s so much skill in almost every facet of the film. It’s beautifully shot, the acting is largely impecable, the editing works. Yet the flawed apocalypse extravaganza that is Danny Boyle’s 28 Days Later finally works better as a film, mainly because it tries to be less and succeeds to be more. Mereilles’ film, undoubtedly the more ambitious of the two movies, fails to live up to what it so obviously tries to be, it’s difficult to see it as anything other than a noble failure, the emphasis being on the latter.

P.S.: Having said that, I’m greatly looking forward to the director’s future work. After City of God and The Constant Gardener, Mereilles would have to turn out the equivalent of Lady in the Water or The Village for me to start thinking that the previous displays of his talent were mere flukes. Even one of his failures is vastly more interesting viewing than a successful Brett Ratner flick.

P.P.S.: Blindness was adapted for the screen by Canadian author/director/actor Don McKellar (who also has a small part in the film). For people looking for an interesting end-of-the-world film that succeeds better, perhaps for trying less hard, check out his Last Night, the sort of apocalypse movie that only the Canadians could pull off.