In real life, the tower would probably be something along the lines of 50 metres high. In games, I don’t usually feel height so much as understand it as an abstract thing: if my in-game avatar falls from up here, he won’t survive. Vertigo, which I feel in real life, is something entirely different: it’s visceral, it’s something between nausea, anxiety and a weird impulse pulling me towards the edge. I feel this on bridges and towers, but not in games, not so far. So what makes the difference in this case?

Perhaps it’s that I was up there with another player.

This is guesswork on my part, but at the time I was up on that tower I was playing Dying Light in co-op mode – which, to those of you who aren’t all that much into games but are still polite enough to read my posts on videogaming, means that I was playing cooperatively, with a friend’s avatar sharing the game space with me. We were fighting (and running away from) zombies together, we were exploring the city together, and we were clambering that radio tower together. On one level it makes no big difference whether the character standing right next to me on the screen is controlled by the game or by a person several hundred kilometres away: on a still, an NPC (or non-player character) looks pretty much like a PC (are there any other abbreviations that have as many entirely different meanings?).

Cognitively, though, I’ve found that the difference is huge. Characters controlled by other players are unpredictable in ways that NPCs aren’t. They move more organically, for one thing. Add to that voice chat, a function that most modern games offer, and the character talking to you isn’t going through lines pre-recorded by a professional actor. As a result of these, and probably of many other subtle things I may not even be conscious of, player characters feel more real. Take as an example the act of following an in-game character. This is something boring and frustrating if the character you’re following is an NPC; they’re always too slow, they don’t react to what you’re doing or saying other than mechanically stopping to wait for you and restarting once you get close enough. Following a player character, though, feels like you’re engaging not with a game but with a person. It’s still a mundane action, but it feels like a real thing. Even getting into a car in a game that’s driven by an actual person feels different, interactive in a way that the exact same thing with an NPC scripted to drive you from A to B doesn’t. In terms of how it feels, it is markedly less abstract. 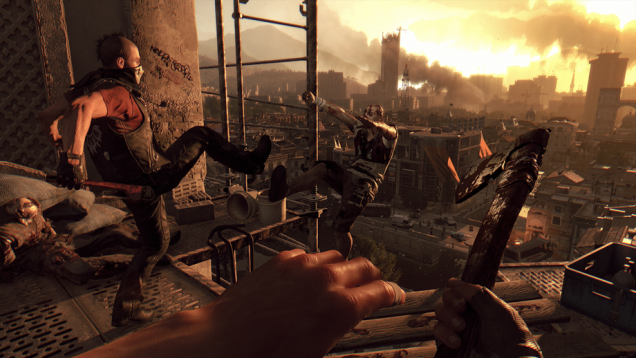 And here’s the strangest thing: when I’m in a virtual space with a character that my brain perceives as more real, the environment gets upgraded to ‘more real’ as well. I get a sense of being in the game space that’s considerably stronger. I’m not just looking at a character that I control in a 2D representation of 3D space: I have a sense of presence in that space that is uncannily like the real thing. I’ve yet to try one of the upcoming Virtual Reality head-mounted displays, which seem to offer an amazing sense of presence in virtual space, but I’m finding that co-op play, in particular in games that use a first-person view, is already pretty damn close to what VR promises.

It’d be interesting to hear what psychologists have to say about this sort of effect and what happens cognitively when we share virtual spaces with others. My own frame of reference is a different one, and the experience reminds me most of theatre, improv and make-believe, with in-game avatars basically being digital masks and costumes, whereas NPCs are more like animatronic puppets. And, in the case of that 50 metre tower? Trust me, my brain very much made me believe that those were 50 real metres, not virtual ones, and if I’d fallen – well, in virtual space no one can hear you scream…

… except for my co-op buddy at the other end of that optical fibre cable. And my wife in the other room. And the embarrassment I would’ve felt, well, that would have been very, very real.