I like the idea of Paolo and Vittorio Taviani’s 2012 film Cesare Deve Morire (Caesar Must Die) a lot: a group of inmates at a high-security prison in Rome, all former drug criminals, mafiosos and murderers, portray themselves rehearsing for a production of William Shakespeare’s Julius Caesar. The boundaries between reality and fiction are dissolved, as everything is a performance of some sort to one audience or another.

In practice, though? I don’t know what to think. The Tavianis have produced a film that is intriguing and beautiful, a theatrical artefact that ignores the realist conventions of cinema. Perhaps my problem was that I’d read about the film being a docudrama, which shaped my expectations – but whatever Caesar Must Die is, it is not documentary. True, the prisoners play themselves, and they did put on a production of Julius Caesar. But the scenes we see that depict first the auditions, then the casting, readthrough and rehearsals: they are at least as overtly staged as any scenes we see from Shakespeare’s play. This is partly due to the acting, which in combination with the often gorgeous black and white cinematography comes across as arch and archaic, calling back to the cinema of the mid-20th century. Mostly it’s the dialogues, though, which disabuses the audience of any illusion that what they’re watching is real.

This in itself is not a problem. Thematically as much as formally, the film raises questions of performance, identity and the ways in which the former can turn the latter from a prison into a stage. However, for me Caesar Must Die suffers from a surfeit of fiction. Theatre – as is potentially true for all art – can find a reality within artifice that doesn’t so much transcend realism but make it immaterial. There is a moment in the stage performance of Julius Caesar shown early in the film and repeated again at the end when Brutus is about to himself on his sword, held by the soldier Strato; as performed in the film, Strato bursts into tears as he realises what Brutus is asking for. Strato isn’t really Strato, nor Brutus Brutus; the sword is fake, as are the costumes. None of this is real – yet Strato’s tears, his sorrow, these feel like the real thing. 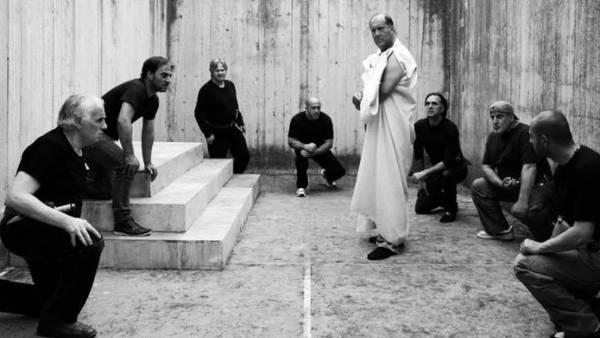 In comparison, the words the prisoners speak when they aren’t rehearsing or performing sound written and they feel written. Brecht is hiding in the wings, watching the show and muttering about Verfremdung to anyone who passes by – but for me the effect is strongest when it achieves the sort of double vision where the audience is perfectly aware of the artifice and still accepts it for real. Caesar Must Die‘s consistent stylisation makes it too easy for the audience to start thinking that everything it shows is artificial and to leave it at that. As such, its purportedly ‘real’ prison scenes start out interesting but end up a distraction from Shakespeare’s play, which seeps into everyday prison life for these performing inmates. One set of masks is simply less interesting, less well written than the other. Perhaps that’s my problem, in the end, the problem of an English Studies snob: in a writing match between Shakespeare and the Brothers Taviani, I end up siding with the former – and I’m not sure if that fault is in my stars or in  myself.