I wanted to like Straight Outta Compton, but the movie made it hard for me. When the credits rolled, I asked myself why I didn’t like it more. The answer: it’s not angry enough. 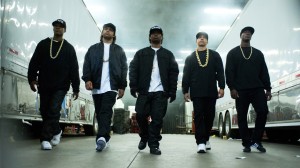 To be clear: it’s angry when it absolutely needs to be. There is a scene where a young, disappointed Ice Cube is smashing the gold records and glass furniture of his white record company connection. There are three or even four scenes where the Compton police cuff each and every black guy they see standing on the sidewalk just because they are black and therefore suspicious. The concerts are atmospheric and dense; you don’t need to know any N.W.A. song to realize that these are angry young men. But the rest of the movie is steeped in mild nostalgia instead of a stubborn feeling of resistance or… well, attitude.

Hip-Hop is essentially hate music, in the best sense of the word. It’s about how badly black neighbourhoods are treated, and how that can piss off men who are not musicians, but find a way to play their stuff, which in turn is powered by their anger. It’s smarter and more nuanced than most of heavy metal. Hip-Hop is also hate music in the worst sense of the word because of its rampant sexism. If you think young black males in Compton had it bad, you may be right, but there are always young black females who had it worse. And they didn’t even have a voice until later.

The movie gets the casting right. Ice Cube (O’Shea Jackson Jr., playing his real-life dad) and Eazy-E (Jason Mitchell) are immediately recognizable; same goes for Snoop Dogg and Tupac, both in minor roles. Dr. Dre (Corey Hawkins) less so; I kept confusing him with the actor playing MC Ren (Aldis Hodge). No matter – the acting is spot-on. 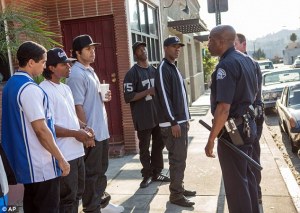 But there are unexplained lapses, mostly due to the screenplay. Consider the scene where Dr. Dre learns that his younger brother Tyree has died. The tour bus stops, and the group gets out onto the sidewalk to mourn his death. It’s a heartfelt scene, but nobody mentions how Tyree has died. Was he killed? What happened? Is that a piece of N.W.A. lore that everybody knows anyway?

On the other hand, if you know a lot about N.W.A., you might get confused during the very first scene where Eazy-E wants to sell his drugs. There is a woman called Tomica pointing a shotgun at him. Tomica is also the name of Eazy-E’s widow. They didn’t have their meet cute on opposite ends of a gun barrel, did they? 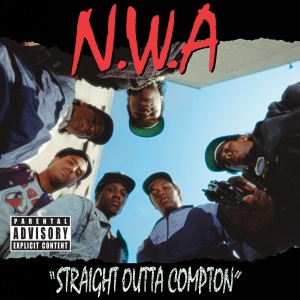 There are scenes of undisputed power, too. N.W.A. take a break from recording their debut album and are standing on the sidewalk, eating and talking. Police cruisers pull up and start insulting and harrassing them, forcing them to lie down (note that the officer telling them to do so is black). They don’t get arrested, but return to the studio and write Fuck Tha Police, their most famous track. If it’s not true, then it’s very well invented.

I accept that N.W.A. started a rap band, not a social movement, but some scenes are tinged with an atmosphere of those good old times that jar with the concert clips or the moments when Suge Knight takes his security job way too seriously. Why does their white manager (Paul Giamatti) start to cry when confronted with syphoning off money? Why isn’t mysogyny adressed properly? Eazy-E died of Aids, after all, caused by his womanizing. If you’re doing a biopic of the most dangerous group in the world, you need to go out there and let at least some of that shine through.