The One I Love, directed by first-timer Charlie McDowell and starring Mark Duplass and Elisabeth Moss, is a neat little Twilight Zone-style examination of Sophie and Ethan, a couple in their 30s trying to rekindle that original spark. When their couples therapist sends them to a secluded vacation home, they find that the adjacent guest house seems to accommodate uncanny doppelgängers: an Ethan who has cooler hair, doesn’t wear glasses, works out and does a much better job of taking Sophie and her frustrations with the marriage seriously, whereas the other Sophie doesn’t resent Ethan for his past infidelity, doesn’t nag and cooks a mean scrambled eggs and bacon for breakfast. Is this just the thing that their marriage needs, a reminder of who they fell in love with? Or is something else going on, something more ominous? 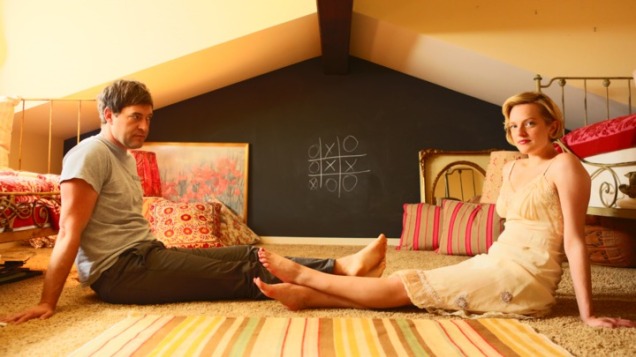 The film does a lot of things right. While the marital tensions between the two characters feel real, The One I Love wisely doesn’t go for big drama; it expresses the protagonists’ disappointments, fears and anxieties in their inflections, in little comments and looks, and it has a light, even comedic touch in doing so. While the situation that Ethan and Sophie find themselves in is disturbing, it is not without humour, and both Moss and Duplass do a great job of balancing these elements, whether they are playing their original selves or their uncanny twins. Even though the themes are far from original, they are well served by the funhouse mirror of the uncanny, showing the characters’ insecurities and jealousies through an unusual lens.

Which makes it all the more of a disappointment that The One I Love falters in its third act and just barely recovers. For most of the film, the mystery of who or what the two too-good-to-be-true doubles are barely matters. What matters is the clash between the real versions and the ideal ones that, in Ethan’s wry estimate, are about 20 percent more wonderful than the real thing. While Ethan is intrigued by the situation, he is not attracted by the other Sophie, even if she makes fantastic bacon; Sophie, on the other hand, sees in the other Ethan the man she fell in love with and someone who is willing to take responsibilities for his (or are they?) past actions and failings. Idealising your partner is one thing, suddenly having an idealised version of you as a rival is quite another. However, as the film moves towards its conclusion, it makes the mistake of explaining, perhaps not everything but too much, about its premise and about the apparent copies next door, and this almost breaks its back. The explanations raise more questions than they answer about the mechanics of the plot, the situation and the characters, without saying anything about the film’s themes, and they prompt the audience to focus on the wrong questions. The doppelgängers function best when they are catalysts and distorted reflections of the protagonists and their fears and longings; when they become different people who happen to share the protagonists’ faces, the story loses its footing. Possibly this could have been avoided, or at least softened, if the partial explanation we get made more sense, but the mystery works considerably better while it is a mystery rather than a list of clumsy questions along the lines of “But why did he…?”, “But how did she…?” and “Then how come…?”

Even in the final act, The One I Love makes good use of its greatest asset, its main actors, and there is a strong scene, both funny and tense, in which the two couples face each other directly in which the sheer strangeness of the scene overrides questions about the ins and outs of the plot. Similarly, the film does end on a strong note, returning to the film’s themes. Nevertheless, it is difficult not to be disappointed by The One I Love, seeing how it gets so much right for most of the time and how it stumbles so badly. I would still recommend the film, but in comparison to other, better films where fantastic or uncanny elements bring very real anxieties into sharp relief – I was put in mind of John Frankenheimer’s Seconds, for instance, a film that isn’t perfect either but that integrates its unreal elements much more deftly – it is a letdown, and it is hard in the end not to fantasise about the version of The One I Love that is about 20 percent more wonderful than the real thing.