“Remember when…?” is the lowest form of conversation.
– Tony Soprano

Now, I’m far from considering Anthony John Soprano the touchstone of film criticism, but I kept thinking of this particular dictum of his throughout much of Star Wars: The Force Awakens. Don’t get me wrong: in almost every respect I consider the movie better filmmaking than the prequels.* J.J. Abrams knows how to stage zippy, effects-heavy action with enough personality so it doesn’t just feel like a VFX showreel. The performances are good throughout, with Harrison Ford bringing more of his erstwhile charisma to the screen than he has in a long time.

The problem, at least for me, is that The Force Awakens is in love with nostalgia to such an extent that the film struggles – and, some would say, doesn’t even try – to find an identity of its own. Of course we all want something that’s properly Star Wars, and differently from that other space opera Abrams has had a hand in reviving there’s a much clearer template for what proper Star Wars is: quasi-mythical archetypes, fairy tale plot points, swashbucklers and princesses, WW2-inspired battle scenes, good vs. evil. What I don’t think I wanted, though, was Star Wars – Greatest Hits. There is entirely too much in the film that goes beyond callbacks and hommages into rinse-and-repeat territory. Desert planet populated by a motley bunch of aliens and humans? Check. A superweapon designed to destroy entire planets? Check. A desperate X-Wing attack on the enemy base that has one small weak spot? Check, check and check again.

What’s worse, though, is the film’s grating coyness when it comes to repeating the Star Wars canon: oh no, that desert planet is not Tattooine, it’s Jakku! It’s entirely different! And that superweapon isn’t a Death Star, it’s ten times bigger! No comparison! I’m not entirely certain what the purpose is of repeating certain motifs, locations and character types almost identically but then putting a different label on them, because a desert planet by any other name is still as coarse and rough and irritating. 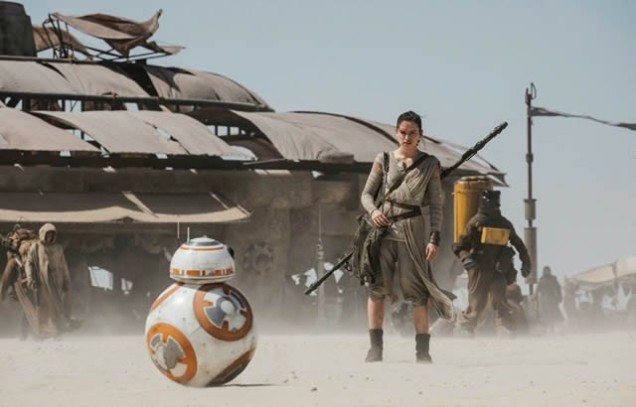 Having said all that, though: I enjoyed watching The Force Awakens. Yes, a lot of that is due to nostalgia. I grew up with the original trilogy, I do a serviceable impression of lightsaber sounds. I rode my bike to school imagining that I was in an X-Wing while TIE Fighters zipped past me with their characteristic roar. And where the prequels mostly failed to push my nostalgia button, The Force Awakens succeeded – not least because J.J. Abrams is good at his craft (even if admittedly he may not have much of a style of his own) and he’s vastly better than Lucas at directing actors.

Even beyond this, though, I have issues with some critics that seem to treat nostalgia as a dirty word. Yes, The Force Awakens has issues with a certain fetishistic reverence towards the past – which the filmmakers may not be entirely unaware of, as this is also a theme hinted at – but while it needs to go easy on the callbacks and echoes turned up to 11, it earns some of the nostalgia. There is genuine poignancy to the reunion of Han Solo and Princess Leia, ably helped along by the actors as much as by our own memories. These were some of my childhood heroes, and I’d be lying if I said that seeing them old and estranged but still caring for each other didn’t hold some meaning for me, which it wouldn’t have in a less well directed, acted film.

More than that, while some of The Force Awakens‘ callbacks are facile and even glib, others feel more like an interesting remix, with Abrams and his writers taking apart the original movies and putting them together differently – not vastly so, perhaps, but differently enough that the dynamics change. This is mostly apparent in the new characters, and these are also the reason why I do look forward to Episode VIII, if with some apprehension. Rey (whose parentage is hinted at so heavily that it almost has to be a ruse), played by newcomer Daisey Ridley, is an interesting mix of Luke Skywalker and Han Solo, a scavenger who’s also a natural in the ways of the force. Finn (John Boyega in a performance that is engaging and funny) gives a very human face to the faceless Stormtroopers, and I hope we’ll see further cracks in the bad guys’ evil resolve – yes, Star Wars needs its iconic, fairytale villains, but there is space (no pun intended) for some ambiguity even with thinly veiled space fascists.

The character I’m most intrigued by, though, is Kylo Ren, familiar from the trailers as the caped, masked man in black. Ren is no Darth Vader, which some old school fans bemoaned – but that’s the point: he is a Darth Vader fanboy, a confused, conflicted young man who rebels against his rebel parents and gives in to the lure of the Dark Side. He is petulant, uncontrolled, and there’s more than a hint of Anakin Skywalker in him – but Adam Driver’s performance combined with scriptwriters that don’t have George Lucas’ tin ear for dialogue make him a considerably more interesting character than the prequels’ second-worst offender.

There are other plot points planted as somewhat obvious hooks for future episodes that I am curious about in a more abstract way, but I am looking forward to joining Rey and Finn on their further adventures. I’ll be honest: I’m also looking forward to seeing more of General Leia Organa and everyone’s favourite fuzzball, Chewbacca, and X-Wings and TIE Fighters. What I’m hoping is that Episode VIII remembers that there needs to be more to these films than nostalgia. By all means, give me some familiarity, but don’t build your entire film around it. In future films, the Force shouldn’t just show us its family album – remember when Luke was yay high? remember when Leia had that terrible hairdo? remember how cool the Death Star was? – but give us new, exciting memories of a long time ago in a galaxy far, far away.

*The one exception I would make right now is the music, which is competent but lacks the strong themes of the original movies and even the occasional standout piece of the prequels.

2 thoughts on “Force of Habit”