Watching The Duke of Burgundy was a pleasure, albeit an unexpected one: for one thing, I didn’t expect an all-female film depicting a sado-masochistic relationship between two lepidopterologists to be so relatable, for another I didn’t expect to laugh out loud at a sly yet strangely sweet joke concerning urophilia. Berberian Sound Studio, the previous film by director-writer Peter Strickland, intrigued and unsettled me in equal measure, but at the same time it didn’t much engage me emotionally. In spite of a typically strong performance by Toby Jones, it struck me primarily as an exercise in style, atmosphere and genre – and one, at that, whose intended audience didn’t really include me, as my knowledge of Giallo is slight.

The Duke of Burgundy is clearly a Strickland film, using many of the same stylistic means as Berberian Sound Studio, such as genre pastiche, a dreamlike quality in which reality is no longer clearly distinguishable, and a dense, non-representational audio design. At the same time, it is arguably a sweeter film, and definitely a more relatable (though definitely not more mainstream) one, even if it plays in a world that is seemingly devoid of men and in which it is hinted that most if not all people are heavily into butterflies and S&M. It may not be as unsettling as Berberian Sound Studio‘s meta Moebius strip, and I’m sure there will be audiences that prefer the creepy mind games of the earlier film, but in the end I’m a sucker for characters I can care about. (It’s probably why I will always choose Truffaut over Godard.) 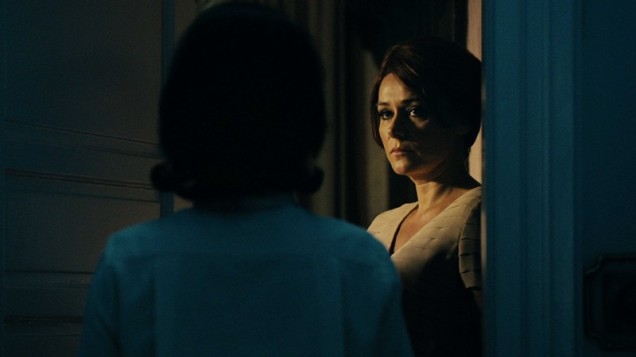 In its ’60s-pastiche title sequence and first few scenes, The Duke of Burgundy comes across as similarly distancing and preoccupied with matters of style and atmosphere, as mistress Cynthia (Sidse Babett Knudsen) and maid Evelyn (Chiara D’Anna) introduce us to their routine of dominance and submission. The roles seem to be very clearly distributed, with Evelyn answering to each of Cynthia’s commands and being punished for the most minor, and most likely imaginary, failure to live up to the older woman’s strict standards. Things are not as they seem, though, and in their relationship it is Evelyn who dominates, at least in sexual terms: she scripts Cynthia’s dominant role quite literally, writing out lines for her that Cynthia has to learn by heart, and she criticises her when the details of her performance are lacking in just the right kind of strictness. Cynthia’s dominant performance, meanwhile, belies her insecurity: it is clear that she would enjoy regular sex and the occasional bit of snuggling over the dom-sub much more than this elaborate roleplay in which she is required to be someone she is not, even if it is for the woman she loves.

This is where the heart of the film lies: in the tension between what we want ourselves, as partners and as lovers and what we do to please the other. The games of submission and dominance turn more serious, though even as Cynthia and Evelyn become more hurtful towards each other as they begin to feel cornered and constrained by the others’ desires, there is humour, as in a scene where Cynthia is first crestfallen, when she realises that the bed/oubliette combo she wishes to get for her birthday won’t be ready in time, and then elated when she hears that the sexy blonde carpenter may just have something called a ‘human toilet’ on offer. By means of its humour and its two central performances things that would seem outré becomes no stranger than the games even the most vanilla of us play in our relationships. How far are we willing to go to make those we love happy? How quickly can we start to resent them for the compromises we’ve freely chosen to make? At the end of The Duke of Burgundy, we seem to return to the beginning: has the lovers’ hurtful struggle for dominance ended and have they found a balance between each others’ needs that allows them to give each other what they need? Or are they bound to repeat the same mistakes over and over? If so, who will be punished for it – and will they enjoy it?

One thought on “50 Shades of Lepidopterology”