This post is about me and my childhood at first, but I promise that it will lead to a movie – a proper feature, by a director you have heard of, with an interesting cast. Just bear with me. I grew up in Switzerland, in a small rural town called B. We once did a semi-serious census at school and came up with some 350 inhabitants. That sounds small, but it was just big enough to grow up in. The only two claims to fame are that 1979 movie and a H. R. Giger exhibition in 1986. Both caused a small scandal.

When people ask me where I come from, they confuse it with a larger place not too far away, with a similar name. When I tell them I am from that smaller place, their faces go blank a lot of the time, and I have to explain. B. was, and still is, a farming village; when I was born there in 1971, there were only a small number of white collar workers living there. My dad was a farmer, my mother was a housewife. There was a sawmill, a post office, a small store, a bicycle repair shop, and a dairy. 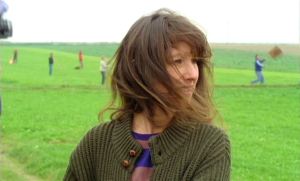 One day, there was talk of a film crew coming to B. Hang on – a what? We had a TV as long as I can remember, but we only had three programs, two of them Swiss, all of them boring. Other channels showed blurred, distorted images of distant countries like France or Germany, fueling our curiosity, but since our TV feed came through a cable our dogs sometimes chewed on, I was only a pale imitation of a TV kid. I knew about the news, about old-fashioned game shows and about cartoons like Tom & Jerry and the Italian Scacchiapensieri every Saturday after dinner. But movies? Nah. Movies happened in the big city, in Bern, which was half a world away. (I later found out it was 20 minutes by train.) So movies came late into my life, and in those years, I had no clue that something like the Nouvelle Vague existed.

There is only one personal memory I still have of the film crew shooting the movie. It is 1979. It’s outside, daytime. The sky is overcast, a slight wind. Somehow I know it’s Sunday. Amidst the acres and fields, near the train tracks, with the woods not too far away, there is a meadow where two large groups of men play Hornus, a Swiss country sport. Instead of telling you what that looks like, I’d rather show you: http://bit.ly/1WPcGsL. I remember a camera and a small crew, some local folk who were looking on curiously, and I remember two people, a man and a woman, walking alongside the players playing their game. I also remember being very much underwhelmed by the situation. It was a film crew, wasn’t it? So where were the car chases, the gunshots, the heroes, the babes? The excitement, the action? Nope. There wasn’t even a sunrise or any audible dialogue. I got bored, and that is the last sure thing I remember. Maybe I started roughhousing with my brother, who was equally bored. Maybe I got told off by a crew member because of all the noise we made. And that is it. I was eight. 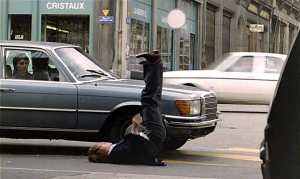 Some time later, there was talk that the film crew asked one of the farmers for permission to film a scene in his pigsty, which led to a scene where one of the female leads showed her naked bottom to a couple of pigs. I took it to be a rumour, but if it was true, then it was just wrong and sick, and what purpose could it serve? First Hornus and now a lady’s naked bottom for the pigs to stare at? What kind of story was this? Please, Mum, Dad, what kind of movie where they shooting? I hoped in vain for an answer; my parents just shook their heads and went on with their buisness. Some of the grown-ups went to see it at the theatres, and later, there was talk that it would be on TV, but late, and on a school night. I never saw anything of it, but of course it stuck in my mind until today.

The movie is called Sauve Qui Peut (La Vie), directed by Jean-Luc Godard, starring Isabelle Huppert, Nathalie Baye, and Jacques Dutronc. There is a Criterion DVD re-release from 2015 under the English title Every Man For Himself. It’s Godard’s return to storytelling after a long time of political and experimental video work. It’s mainly about relationships: Dutronc plays Paul Godard, a bored TV executive, who not only cannot deal with his estranged wife and daughter, but is also about to lose his girlfriend Denise, played by Nathalie Baye. Denise wants to get into print journalism and so moves from Nyon to the countryside to work for a small newspaper where she can use her bike to work. Paul wants to stay in the city, so that’s that. That part seems to be autobiographical: his wife Anne-Marie Miéville wanted to move to the Swiss countryside, and the real-life Godard agreed and followed her.

Denise meets a photographer, and together they cover a game of Hornus for the local newspaper. The movie then introduces Isabelle (Huppert), who prostitutes herself in the city and, one evening, chances upon Paul who queues up for a movie, and has paid sex with him. The following scenes with Huppert and her customers are hard to bear, not because of the nudity, but because there is a kind of casual detachment in the cast’s attitudes. There is a kind of weird foursome involving Isabelle, another woman and two men. Isabelle assumes her submissive role in that game, but towards the end of the scene, there is that small smile Huppert often has that lets you know that she, despite appearances, has gained the upper hand.

More uncomfortable scenes follow: Paul Godard talks about fondling his underage daugther’s breasts. He gets propositioned by a gay valet in the parking lot of his hotel. Isabelle’s sister is interested to get into prostitution as well, and asks her for advice. There is an opera singer following Paul everywhere, and a misterious lady in a fur stole. All in all, Paul is an unpleasant character, and doesn’t really care about anyone and anything. Isabelle eventually thinks about quitting turning tricks, and since she is played by Huppert, she is interesting, but it’s Denise who is the identifiable character in the whole film, maybe the only one.

Denise looks for someone to take over her flat in the city, and of course it’s Isabelle who reads the ad and contacts Denise. Isabelle arrives there and witnesses a weird scuffle between Paul and Denise that leaves Denise convinced she has to leave Paul for good. Paul himself splits from his wife and daughter and, only seconds later, gets overrun by a car in which sits Isabelle’s sister, who at some point also thinks about becoming a prostitute. I have no idea what that circular narrative thread is supposed to say, but then, I think that the sexual statements that the movie makes haven’t aged all that well. Such weird, non-penetrative prostitution as Isabelle is asked to perform may exist, but it must be pretty rare. Isabelle will inevitably encounter customers who will demand more things, and harder things, of her.

The scene that is closest to my memory happens ten minutes into the film. There are kids in the frame, watching the Hornus game proceed, but I don’t think I am one of them. Most likely, I was to the left, just out of the frame, near a small hut that served as storage space and as a small bar and kitchen. Maybe the camera would have panned further to the left if there hadn’t been a small boy making all that noise and playing the fool. I had the small hope that Isabelle Huppert had walked over and told me off for ruining the scene. How cool would that have been? Being told off by Isabelle Huppert. I only realized while watching the movie that it was Nathalie Baye in the scene, not Huppert, but I’m not complaining. And of course Godard would have been around there somewhere.

Godard had bigger plans with that scene. He says in a video essay that he wanted to show the madness in the countryside, the pure lunacy of moving away from the big city. He tried to convey that with showing a game of Hornus. Plus he wanted to shoot a scene where Denise would have chanced upon Werner Herzog in the woods. Herzog wasn’t available, and Godard abandoned the idea. I think I would have remembered Herzog on the set that day. I probably would have behaved properly.

I am 45 now, and I keep returning to B. because that is where my parents and my brother and his family still live. Easter, Christmas, birthdays, that kind of thing. The shop, the sawmill, the repair shop, the post office and the dairy have all gone. The school I went to still exists. The restaurant is under the ownership of chef Georges Herzog (no relation to the director), who has a gallery on the first floor, where H. R. Giger put his art on display in 1986. There was objection to the exhibition, and there was objection to the more delicate scenes in Sauve Qui Peut (La Vie). Nobody talks about that anymore. Life goes on. And maybe the farmer who saw his pigs getting mooned by a French actress was upset – by being awed by the presence of a famous director, by the lewd act perpetrated in the pigsty. And for proof that movies are our collective memory: these aren’t pigs in the picture, of course, but calves. Memory is a tricky thing. Sometimes movies seem to be more reliable.