The Assassin is one of the most beautiful movies ever made. It is also one with the most difficult storytelling. That sounds like the obscurity of the story somehow sabotages the beauty of the movie. It doesn’t. Since you have to really pay attention in order to guess what exactly is happening, you get the occasional breather when the movie shows you a pond at sunrise, with two birds chasing each other across the water. It’s not that the story is complex, it’s just that the way of telling it is unconventional. Characters are introduced by simply being put on screen. Flashbacks don’t come when you expect them. The female protagonist has no more than three or four lines of dialogue. There are two long monologues by two different characters providing a lot of back story; they pause between sentences, and you are never sure if their words are all they are actually saying, or if they are telling all, or telling the truth. 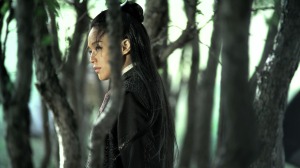 Ah, the plot. Let me tell you what I know for sure: We are in 8th century China, the Tang dynasty is weak, especially so in Weibo, the largest district. The governor of Weibo, Tian Ji’an, has to quell internal quarrels before the court decides to intervene. And there once was a nun in Weibo who kidnapped a young girl called Nie Yinniang and trained her to be an assassin killing corrupt government officials, thereby limiting the Court’s power. But Yinniang fails to kill a man because he has his small sleeping son in his arms. The nun isn’t pleased and tells her to go kill Tian Ji’an. Why? Because Yinniang was once promised to him in marriage, and she still has feelings for him. But what of the plot if this is not a plot-driven movie?

There are martial arts scenes, of course, but they are sudden and quick or half-obscured. There is no grandstanding, no musical cue, no huffing and puffing and no blood. That doesn’t mean that the fight scenes are bad or neglectable – they’re highly choreographed, but not flashy. The movie is more concerned with someone losing face in a duel than losing a life. I have an idea that The Assassin might be a slight disappointment to hardcore martial arts fans.

Yinniang is played by Qi Shu, and she’s a miracle. She barely speaks and gets through the movie with very little facial movement; sometimes she gives the impression that she doesn’t want to be in the frame at all. The thing is that she might be hiding in many scenes, behind some curtains, or sitting above you in the eaves. Once she appears, she is almost hypnotic. For all the confusion, there is always that clear red line: what is she going to do about Tian Ji’an? 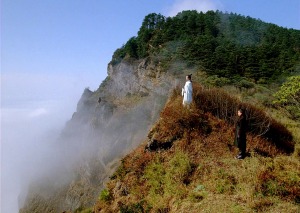 There is one fantastic scene that stands out among a few. Yinniang goes back to see her mentor, the nun. They stand over a vast precipice somewhere in the mountains of Northern China, looking down, side by side, a few steps apart. Yinniang turns slowly and bows to the nun, then she resumes her stance. Eventually, a cloud is obscuring the peak in the background, leaving only the peak with the two women visible. You can interpret that scene the way you like. The cloud seems to signify that their past together is gone. What about the bows? Were they an apology? A goodbye? A summons? You decide. 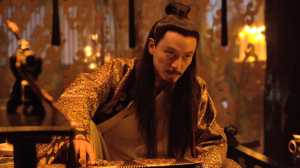 The main confusion with me was the character of Lady Ji’an. I assumed she was Lord Tian Ji’an’s wife, not his sister, and I seem to have guessed correctly. I found an online infographic about the movie, and I seem to have fused no less than three female characters into one. But the thing is that I am pretty sure that there is a mistake in the infographic. I might be wrong, but then other people seem to be confused about the movie as well. I seem to have missed about half of the relationships between characters, but that is actually a good thing. Just consider: you have seen a movie you really like, but cannot figure it out. You want to see it again, not just because you want to understand it better, but also because it is beautiful to look at. Perfect. What more do you ask of a movie? And what movie would give up all of its secrets on the first viewing?