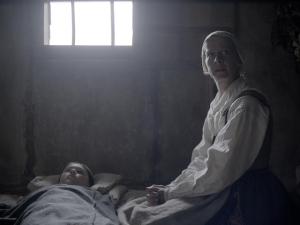 Robert Eggers’ The VVitch: A New-England Folktale works both ways: if you think there is a witch in this movie, then there is one, and we’re in the realm of the supernatural. You can also explain the whole horror by claiming that these people are driving themselves and each other insane. Either way, it’s a pretty good horror flick. It features a Puritan family who are thrown out of their community and build a new home in the wilderness, next to some woods. In 1630, that might well be a death sentence. We are never told why exactly they get banished, but it has something to do with putting God’s law above that of men. They are almost glad about being banished, because to them, it is God’s will.

The movie starts with the voice of William, the family’s patriarch, played by Ralph Ineson, who has a voice so deep and grovelling, it cannot be anything else than ominous and portentous, especially in a horror flick such as this one. His wife is played by Kate Dickie, also an actor capable of outrageous intensity, although she is slightly underused here. The real price, however, is Anya Taylor-Joy, who plays their of-age daughter Thomasin. Their younger siblings treat her like a child, her parents see a grown-up in her. There are four more kids: Caleb (Harvey Scrimshaw) and the twins Jonas and Mercy, and their youngest, baby Samuel.

They worship God and His creation, nature. Soon enough, weird things start happening. The twins claim that Black Phillip, their goat, talks to them. An egg contains a dead chicklet. A silver cup disappears. An unkillable hare appears, looking at them ominously. For a long time, they try to adhere to their religious principles while living in that austere, almost hostile environment. When their crops fail, William realises he is no good at hunting. Their goodwill wears thin, and they start accusing each other of lying, stealing, sinning, and generally failing at being a worthwhile family member and a disciple of God. That throws another light on their banishment. Other blogs mention the suppressed female rage in the movie – true, but what about the male impotence? Caleb succumbs to what his mind is telling him is a witch, and is shamefully interested in his older sister’s physical attributes. William is unable to provide for his family.

Baby Samuel disappears. Who has taken him? Has he gone to heaven or to hell? We see a female hooded figure hurrying through the woods with the baby in her arms. She uses him in a unspeakable emasculation ritual. Is that really what is happening, or is that what the mother, Catherine, thinks is happening to her youngest? Is this her nightmare? Does her religious worldview conjure up such horrors? There is a later scene wherein Catherine is indeed capable of imagining the return of the dead. One of the major charms of The VVitch is that some scenes can be interpreted in two ways.

Soon enough, their strict religious code breask down. They lie to and steal from one another, they make outrageous accusations and hold each other to moral standards that every one of them can no longer adhere to. Soon, Thomasin is called a witch. Sometimes, she vehemently denies this claim, sometimes she confirms it. She is afraid that she might be one, and admitting it to herself might take away some of the fear. Not that she necessarily is one – she might just think she is.

The VVitch might take place in the wilderness, but is very much a chamber play, featuring a family that does a horribly good job at decimating itself. Most scenes are devoid of all color except for the red of the blood. I only have two small problems with the movie: it starts very early with shots of the nearby woods that are scored with some Ligety-like chorals. Those chorals fit the movie, but come too early and are used too many times. And the accusations are coming quicker and quicker, so much that the truth gets buried underneath them. Maybe that’s the aim, but the dialogues are so well-chiselled that their quality suffers when the lines come too fast and are almost garbled. That hurts the movie as a whole, which is a shame, because the entire family might be rotten and beyond saving, but their words sound like poetry.

2 thoughts on “VVitching hour and a half”