Last week we went to see the latest of the new Star Trek films, the one whose title is certain to trigger a Pavlovian response in any fan of the English ska band Madness. I’d greatly enjoyed the first of the reboot movies back in 2009, though Star Trek Into Darkness hadn’t done much for me, but I hadn’t given up on the franchise yet. Star Trek Beyond, though… It’s a competent enough film in some ways, the main cast is still the best reason to watch the reboot – but I simply didn’t feel it. Most of the time it wasn’t the plot that kept me engaged; instead I found myself distracted, not least by remembering the recent death of Anton Yelchin and thinking, wistfully, that he should have had his final appearance as Pavel Chekov in a better film. 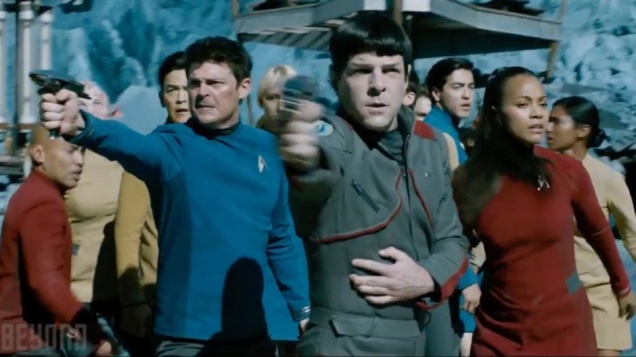 The thing is: I used to be a big Star Trek fan. It didn’t start with the Original Series, which I watched in the dubbed version as a kid, though I always enjoyed Spock and Bones (or, as the Germans called him, “Pill”) while finding Kirk rather grating. Instead it was the late ’80s/early ’90s follow-up, Star Trek: The Next Generation, that pulled me into this universe. Even though the series was preachy and stodgy at times, I watched it religiously. Even in the worst episodes, I still enjoyed hanging out with Picard, Data and the rest of them – and when veterans from the original popped up, Bones and Scotty and even Spock himself, that universe began to feel larger and deeper. I remained a fan during the Deep Space Nine years, which produced some of the most interesting, most ambitious Star Trek stories and characters. When the next series, Voyager, premiered, I gave it a chance, but something had changed. Perhaps my enthusiasm for Star Trek had fizzled out, or my interests lay elsewhere, with the more modern-feeling X-Files, though I was never as much of a devotee as I had been with Trek. (Don’t tell anyone, but in my late teens and early twenties, I wrote two novel-length Star Trek stories and even tried to submit them to publishers. No one told me at the time that there was such a thing as fanfic.)

My disappointment with Star Trek Beyond was definitely with the film, its perfunctory plot and generic villain (what a waste of Idris Elba!). More than that, though, I was disappointed that it didn’t even come close to recapturing some of what had drawn me to Star Trek in the first place: this sense of a universe in which my imagination could make a home. There’s something special about a fictional world that feels like it exists outside the individual stories that create it. Spock and Picard, Major Kira and Odo: at their best these characters felt real to me, and they made the universe feel real as well. Obviously this was fiction, it was all made up – but at least as a kid and as a teenager, I enjoyed fictions I could believe in. Star Trek was one of these, as were gaming series like Ultima, which had me visit the same world repeatedly, over dozens and even hundreds of years, and there was a special poignancy to seeing my old companions grow old and the world change slowly. That’s another mark of a fictional universe that feels real: it ages along with its viewers.

As Trek fell by the wayside, its characters and stories becoming less interesting and engaging and instead increasingly derivative and redundant, I found other worlds to care about in the genre fare of Buffy the Vampire Slayer, Firefly and Battlestar Galactica – and later in several of HBO’s series, first The Sopranos, then Deadwood, The Wire and perhaps especially Six Feet Under. These weren’t universes in the sense of Star Trek, they didn’t evoke actual galaxies, nebulae and solar systems – but they were worlds, peopled by characters that I cared about. They didn’t stop existing when I switched off the television: they continued in my imagination in between one episode and the next. 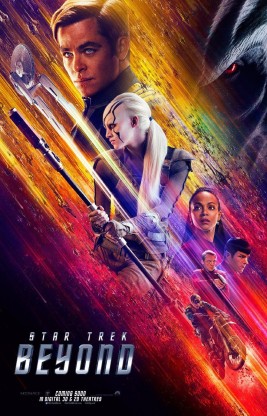 The 2009 Star Trek reboot started well for me. It was fun, it was exciting, and it did the almost impossible: take iconic characters that I had expected to be inextricably linked to specific actors, and make them anew, with a fresh cast. But then came first Into Darkness and now Beyond… and these characters haven’t even begun to escape the constraints of the screen. They don’t make the journey into my imagination. There’s too little there to spark it off. The stories are too much done by committee, the films too much in love with special effects and in-jokes at the expense of most other things. There were rare moments when the last two films managed to pull me in, but most of the time I remained firmly outside, watching actors and sets and CGI. I was eager to find a universe that would resonate as much as the Star Trek universe used to for me, but I was disappointed. Perhaps it’s difficult to create a cohesive world that feels real in a series of films as opposed to a long-running TV series – though Star Wars managed this surprisingly well in its original trilogy.

Perhaps it’s a matter of growing older and more reluctant to commit wholeheartedly to a fiction. Perhaps it’s more simple than that, though: while Star Trek (2009) was great fun and injected life into the franchise, the series’ creative leads aren’t all that interested in creating a world. There’s no sense of ambition or adventure. Both Into Darkness and Beyond feel too much like exercises in ticking boxes: CGI action setpieces, check. Fan service references, check. Spock/Bones banter, check. There’s nothing in the films that indicates that the producers or the writers are interested in this universe or willing to let it breathe and come alive. The films are in a constant rush to get to the next moment, which ironically makes them not more but less exciting. On the surface. the CGI worlds of Beyond are vastly more impressive than the cardboard and papiermâché backdrops of the original series or the matte paintings of The Next Generation, but only on a technical level; as worlds that are interesting, that invite exploration, they remain flat and fake. The biggest failure of Star Trek Beyond is this: it makes its universe feel pretty damn small.

4 thoughts on “All these worlds can be yours (but will you want them?)”