I fell in love with John Carney’s Once. That is not a particularly original reaction to the film, but it’s definitely true for me. Once is a beautiful, subtle love story told mostly through music – or is it a music film told through romance? Having recently watched Carney’s follow-ups, Begin Again and Sing Street, those same elements, love and music, are central there too, and with them it’s also impossible to separate the romance and the music.

Each of the films basically follows the same structure: a group of musicians that, while some are professionals, all embody the original sense of the word amateur, try to ‘put on a show’, in the broadest sense. (They may be forming a band, putting together a demo tape or planning to play at the end-of-year ball.) In parallel, we see a relationship developing between the films’ versions of Guy and Girl, as Once’s protagonists are called in the credits. Basically, we watch that oldest of musical clichés: boy meets girl, boy and girl fall in love through the medium of music – or making music through the medium of love.

Carney’s films aren’t exactly original, but they feel fresh, and their romances ring true – though perhaps least in the case of Begin Again, even if that one got an unfair rap due to following the utterly sublime Once. The thing is that while Keira Knightley and Mark Ruffalo do a good job, Carney using Hollywood stars instead of relative unknowns and moving his film’s location to New York changes things, added to which Begin Again’s music is a bit too Starbucks for its own good. Even then, its romance is admirably restrained and low-key, which actually makes it more effective. Carney’s characters rarely talk romance, and they definitely don’t voice those clichés of romantic movies: they aren’t about soulmates or finding The One, and this is one of the reasons why they succeed in fresh-minting what is stale in most cinematic romances. (I’d argue that love in romantic films more often than not is less about love and more about reproducing what love is supposed to be according to movies.)

Again, this doesn’t make the romantic storylines original, but Carney has a firm understanding how love can be unoriginal and still feel entirely new to the people feeling it. This is cleverly highlighted in Sing Street, whose protagonists are teenagers – in other words, they’re pretty much the perfect embodiment of thinking you’re the first ever to feel the way you do about life, school, your parents and siblings, or about the cute girl or boy across the street. It’s also Sing Street where the parallel strands – the music and the romance – are most in sync in this respect: the main character Connor’s newly formed band starts off by coming up with knock-offs of the songs they see on Top of the Pops, from Duran Duran to The Cure, but in copying the sound, look and feel of these bands they try out different versions of who they are and who they could be, making the act of impersonation into something more personal and genuine, and the same is arguably true of how they come of age romantically, by imitating what they see at the movies, on TV and in music videos – not least because Connor’s immediate romantic role models, his parents, are falling apart as a couple right in front of his eyes. 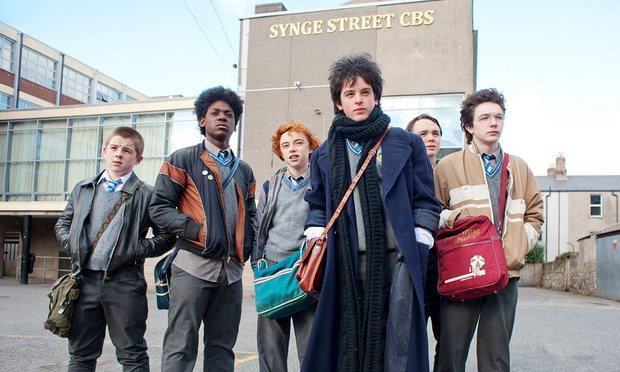 What Carney also excels at is capturing how the act of creating something – in the case of his films, creating music – acts as a powerful amplifier to emotions. His characters fall in love through music, they woo through music. There is a powerful, exhilarating feedback loop between creation and emotion, and I don’t know any films that get this in its immediacy as much as Carney’s. Share this act of creation with someone else and, well, you’re turning the emotions up to 11.  (Once‘s Academy Award-winning song “Falling Slowly”, while definitely a nice song, loses a lot of its power when taken out of the context of the film, where we see the two characters coming up with it.) Once‘s characters may not wear their feelings on their sleeves, but in making music together they are in effect making love – not in the usual, euphemistic sense, but literally. And, if they’re willing to let themselves, the audience is swept up in this as well. There’s a surprising, powerful intimacy to the films that is rare in movies, especially since the films are very conventional in terms of their structure: boy meets girl, boy and girl make music, boy and girl fall in love.

Which makes it more interesting that both in Once and Begin Again, Carney denies us the conventional closure of romantic films. The guy and the girl don’t end up with each other. They do in Sing Street, but even there the film’s ending doesn’t exactly go for the familiar strains of “Happy ever after..”. Perhaps it couldn’t. Carney’s romances may be all the more effective, and affecting, because they believe in love, but they don’t necessarily believe in the conventional fairy tale of movie romances. You can fall in love with a song… but a song always ends.

One thought on “If music be the food of love”