Mobile Homes is a good movie, no doubt, but there is a kind of void in its middle that prevents it from turning into a great movie. Bear with me. It’s the story of Ali (Imogen Poots), her young son Bone (Frank Oulton), and step-dad Evan (Callum Turner) who live out of Evan’s truck and drift from place to place, selling roosters for cockfights or reselling probably stolen household gadgets. They are chronically broke and often have to resort to dining and dashing, a trick that Bone has to do far too often. They are one broken exhaust pipe away from being homeless. I don’t doubt that Ali and Evan love each other, even if they also cling to each other out of necessity, and that Evan tries to be as good a step-dad to Bone as he can, although Ali and Evan often send Bone to find empty homes so they can do their B & E spiel. Life cannot go on like this for much longer. 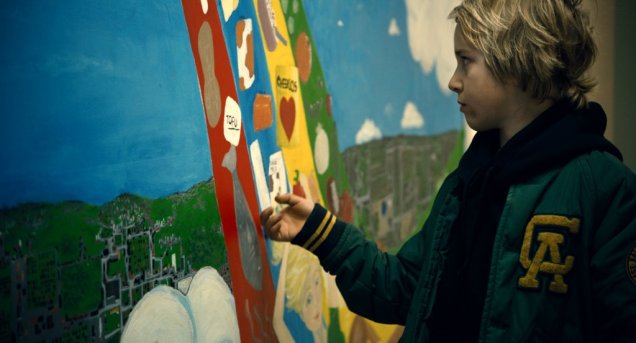 The problem with Mobile Homes is that I have no idea what Bone thinks about his situation. He does the dining and dashing thing when asked, he befriends a rooster, he roams around the neighborhood, but we never get to know him any better. I would have loved to hear in his own words what he thinks about helping his mum and step-dad’s life of petty crime. At some point, he must realize that breaking and entering is wrong, but that it sometimes is the only way to get food and shelter. How does he live with that contradiction? We don’t know. Mobile Homes should at least give a hint about his state of mind. He is 8 years old. Does he still have that obliviousness that lets kids forget that they come from a poor family? Has he ever sat in a classroom in his life? To a lesser degree, there are also moments in Ali and Evan’s lives where a few lines of dialogue would have improved the scene. We get to see them have sex instead. Nothing against that, but some cuts and edits seem either random or gave me the feeling that there was a scene missing. While Poots and Turner manage to play a scene the way they want it without any dialogue, it’s a problem for the boy playing Bone.

The ingredients for a better movie are there. Imogen Poots and Callum Turner are interesting actors. The role of Evan was slated to be played by the late Anton Yelchin, and Turner took over. (All three of them have been in Jeremy Saulnier’s Green Room.) The story itself also takes an interesting turn: during a police raid of a cockfight, Ali and Bone are separated from Evan, and mother and son escape to a lot with empty mobile homes. They fall asleep in one of them and find out the next morning that their hiding place is on a flatbed truck on the road to its new owner. The man selling and delivering those homes is Robert (Callum Keith Rennie), and instead of being nasty to Ali and Bone, he eventually offers Ali a job. In a gruff parallel universe, Robert would be played by Sean Bean. Callum Keith Rennie turns up in the most diverse features or TV series (from Battlestar Galactica to Fifty Shades by way of Jessica Jones), and he is one of the most underappreciated actors.

The movie underplays the fact that what Ali, Bone and Evan want is a steady home; now that Ali works for Robert, she comes to work in such a home without actually owning it. These are the moments that work best: there is some unspoken trust between Ali and Robert, and it is to the movie’s credit that they don’t start an affair. That Ali tries to steal one of those homes is a slight cop-out because it is barely credible, albeit understandable, but here, too, the movie does not let us know what Robert thinks about the theft. Mobile Homes could be the wintry companion piece to The Florida Project, but its characters need some work.