Video games are so good at creating highly detailed, interactive worlds these days, it’s easy to forget that you can do the same using much less hi-tech means. For most of us, the first worlds we found, explored and enjoyed were created using much simpler building blocks: words, words, words.

Device 6 by Swedish developer Simogo (of Year Walk fame) is a beautiful marriage of the technological pixel-pushery of multimedia in the age of the iPad and the fertile imagination of good literature. It’s a puzzle adventure using images, sounds and music, but first and foremost it reads like a book – though where most books tell a linear, sequential story, Device 6‘s narrative is branched, literally. As you read about the story’s protagonist, Anna, entering a room with two exits, the text in front of you also bends and branches off: do you turn left and follow the words into the drawing room, or do you take the word stairs leading off to the right and around the corner? In order to explore Device 6‘s nooks and crannies, you turn your own device as the story, mapped out on the screen, takes you places. 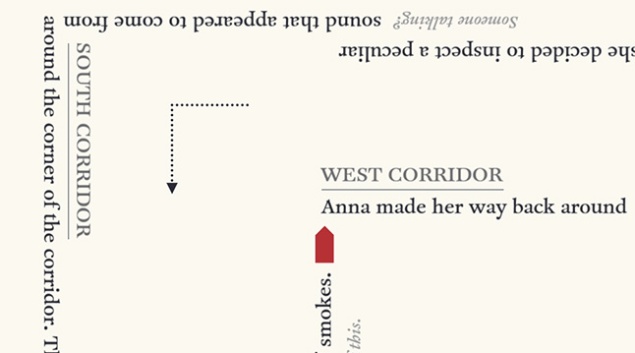 And what great places they are. Device 6 takes its inspiration from the Swinging Sixties and in particular from that British strain of spy fiction that is less interested in Cold War shenanigans than in absurdism and the metaphysical. As you follow Anna through carefully wrought artifice in the shape of manors, gardens and lighthouses, listening to radio transmissions and trying to decode cryptic messages, it’s impossible not to wonder whether, as you open the door, you’ll actually find yourself in the Village, proclaiming that you are a human being and not a number.

While Device 6‘s story leans perhaps a bit too heavily into the ominous, paranoid surrealist stylings of classic TV phantasmagoria The Prisoner, it pulls off the tone and aesthetics beautifully, making for that rare thing: pastiche that actually holds up without overly literal reference (not to mention deference) to the original. Again, it’s the writing that does a great job of this, but it’s aptly assisted by the utterly stylish multimedia aesthetics, from a gorgeous, Saul Bass-inspired title sequence to the ironic guitar twangs alluding to a whole army of British spies from the Sixties.

Device 6 uses simple but perfect means to pull you into its world of trickery and subterfuge, my favourite being pictures that act as windows into this world: as you swipe along to follow whatever narrative thread you’re currently pursuing, those pictures shift their perspective, usually just enough to give you an incomplete glimpse at what’s to the left and right of whatever ominous mannequin or statue is staring out at you through blind eyes but not enough to reveal everything. The effect is that you constantly suspect you’re being watched by someone curious but probably less than well-intentioned hiding just out of sight.

Like The Prisoner, Device 6 ends on a note that is intriguing but not necessarily satisfying. Little is explained and you, Anna’s successor, are left holding the eponymous device, knowing that your many questions won’t be answered – but reminded that in order to create a world, sometimes you need little more than words cleverly arranged on the page.

2 thoughts on “They Create Worlds: Device 6”