END_OF_DOCUMENT_TOKEN_TO_BE_REPLACED

GUS: We don’t do anything different?
BEN: We do exactly the same.
GUS: Oh.

He exits through the door on the left. BEN remains sitting on the bed, still.
The lavatory chain is pulled once off left, but the lavatory does not flush.
Silence.

END_OF_DOCUMENT_TOKEN_TO_BE_REPLACED

No, this isn’t another post on The Road. (I’ve written interminable entries about one Nick Cave-scored film, I don’t need to add another one at this time.) It’s about the book I’ve just finished reading: Must You Go?, a memoir by Antonia Fraser about her life with Harold Pinter. I’m usually not much into memoirs and biographies – I’m very much a fiction reader – but this one was a present from a friend, and a fitting one; I’d directed that friend in a student production of Pinter’s The Dumb Waiter 13 years ago. 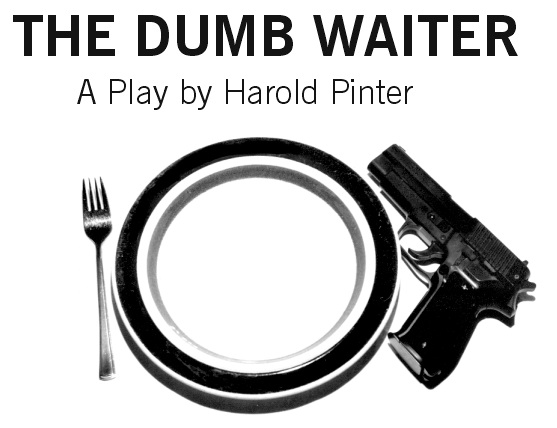 Fraser’s book is eminently readable, even if during the middle third or so it feels like it consists primarily of encounters with famous people and praises of Pinter’s writing – though obviously one wouldn’t go to a widow’s memoir for an in-depth appraisal of an author’s literary output. Must You Go? is also a sad book, as its final 100 pages lead up to the death that answers its titular question in the depressingly affirmative. But throughout the book there are passages that made me smile, grin and every now and then even laugh out loud. And there’s something so wonderfully British about the diary entry that describes what happened after Antonia Fraser told her husband at the time, Hugh Fraser, about her affair with Harold Pinter:

In the end I summoned Harold round. He drank whisky, Hugh drank brandy. I sat. In a surreal scene, Hugh and Harold discussed cricket at length, then the West Indies, then Proust. I started to go to sleep on the sofa. Harold politely went home. (p. 23)

I’d be curious: did Michael Caine and Jude Law talk about Alfie on the set of Sleuth? Did they compare performances? Did they get drunk and watch the Stallone version of Get Carter? Or did they just stare at each other threateningly until Kenneth Branagh shouted “Roll camera”?

The Sleuth remake sounds like quite a compelling proposition at first: one of the grand old English actors facing off against a glittering, promising young guy. (Admittedly, Jude Law hasn’t quite followed up on the promise of his early films, has he?) Directed by Kenneth “Four fucking hours of Shakespeare” Branagh, who has a deft hand behind the camera when he isn’t trying to showcase his own thespian ego. And the original play and film adapted by Harold Pinter, master of intellectual menace and keeper of the weasel under the cocktail cabinet. 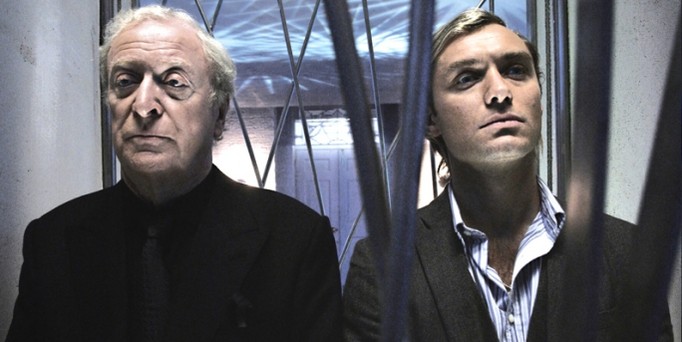 In practice, though, Sleuth is dead as a film. It has occasional moments where the individual contributors flare up and come to life, but it’s like putting an electrical current into a dead frog. Its twitches are easily mistaken for signs of life, but the poor little green guy is still as dead as, well, a dead frog.

Michael Caine probably fares best. He slips into the Pinteresque dialogue with ease and manages to make it sound relatively natural. Caine comes closest to convincing us that the film has a beating heart – but even he cannot sustain this against the wooden staginess of the proceedings. The script might work on stage, with the immediacy that a live performance brings to things, but if some scripts jump off the page, this movie lurches back onto the page.

I’ve liked Jude Law in a number of films, first and foremost Gattaca, The Wisdom of Crocodiles and The Talented Mr Ripley, and he’s got moments in Sleuth where he shines – but all too many of his line deliveries sound as if he imagined that This Is What Pinter’s Supposed To Sound Like. It gets worse in the second part of the film, after the first major twist, which I felt was badly handled; I sat there wondering whether it’s a genuine twist or whether the film suddenly decided to go all post-modern on us. I would have prefered the latter, since the twist made the characters even less credible. In any case, after half an hour Law turns up as a new character, but while his body language is convincing, his accent couldn’t be more fake. Yes, he’s supposed to be fake, but if it’s so transparent to us that this is Jude Law in disguise, it makes the Michael Caine character look stupid if he doesn’t get it… and since the film tries to convince us that the characters aren’t stupid while showing them doing utterly stupid things, it’s difficult to take anything happening on screen seriously.

The third act introduces a homoerotic component that seems to have popped in from a different film altogether. While the casting should work brilliantly here – Law has always had a peculiarly feminine quality – seeing Michael Caine trying to get his menacing paws on the younger man rarely feels anything other than awkward because the development comes out of left field, from another game, in a different country altogether.

Would the film have worked better for me if I’d seen the original? Perhaps – but I doubt it. Branagh’s main mistake in the end was to think that the staginess of the script could be counteracted by ‘clever’ (read: obvious) cinematographic choices. However, no weird camera angle will distract from the script and the performances if they’re geared towards the stage. Seeing this live might have been riveting. Seeing the film? Well. Dead frog.

After I killed him, I dropped the gun in the Thames, washed the residue off me hands in the bathroom of a Burger King, and walked home to await instructions. Shortly thereafter the instructions came through – “Get the fuck out of London, you dumb fucks. Get to Bruges.” I didn’t even know where Bruges fucking was.

Martin McDonagh’s In Bruges is an effective, strangely affecting black comedy. It’s by no means a great movie, but what it does it does tremendously well. Many of the reviews compare it to Tarantino’s films and to the modern Brit gangster flicks such as Lock, Stock and Two Smoking Barrels, but both of these comparisons miss the persuasive streak of sadness that runs through the film.

Clearly there are elements of Tarantino’s Pulp Fiction, but these similarities only go skin deep. (Two humanised hitmen spouting funny, quotable lines.) A more apt comparison would be Harold Pinter’s The Dumb Waiter, both in its absurdity and in the way its characters are acutely aware of their guilt yet unable to verbalise their feelings. Both Pinter’s early play and McDonagh’s film work as comedy, yet it wouldn’t be fair to either to dismiss them as just that. 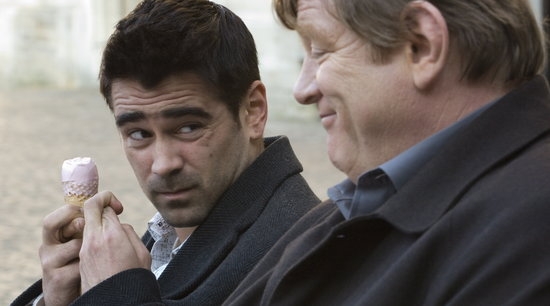 A lot of the sadness that permeates (yes, I’m using that pretentious word – deal with it) the film, clearly helped by the medieval morbidity of Bruges and Carter Burwell’s simple yet effective score, comes from Brendan Gleeson. However, while Gleeson’s performance is spot on, it isn’t that different from many of his earlier dubious yet loveable characters (his best to date, as far as I can tell at least, would probably be Martin Cahill in John Boorman’s The General). For me, the true standout performance, surprisingly, was Colin Farrell, both funnier and more touching than I’ve ever seen him. (Disconcertingly, Farrell’s second best performance was in a Joel Schumacher film, Tigerland. How’s that for scary?)

In Bruges falters towards the end, with a finale that ramps up the absurdity at the price of its earlier moodiness, but the film remains a small gem composed of moments of unexpected beauty. And how often do you get the chance to see Ralph Fiennes play the Ben Kingsley part from Sexy Beast?

Coming up next (hopefully sooner than this update): Is it possible that the Goofy Beast was slightly disappointed with a Joss Whedon-penned comic? (No, not Buffy.) 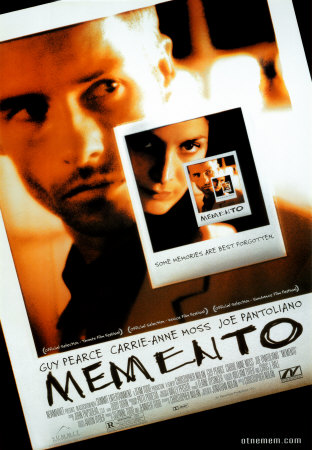 Last evening’s session on film analysis went well, and the students enjoyed it too. It made me want to do an entire course on the subject. It also made me want to watch all three movies again.

Of the three, Memento is the one that startled me most when I first saw it. It’s intricately structured and plotted, but beyond this it’s beautifully presented, with a sparse melancholy and occasional absurd humour that strengthen it into something more than a well made puzzle.

It’s also got a fantastic, disorienting first scene that acted as the perfect hook for me. I got the impression that it also did so for the students yesterday; they seemed quite frustrated at me stopping the film after roughly seven and a half minutes. Well, guys, it’s in the department DVD library, I think – and if it isn’t, just pester one of the staff members ’till they get it. After all, someone also got the original Texas Chainsaw Massacre for the department, which justifies many an additional purchase, I think (Perhaps they could get Crossroads, that Britney Spears movie, scripted by Shonda Rhimes of Grey’s Anatomy fame.)

I liked the effects of reverse chronology in storytelling, if done well. Memento definitely makes good use of having two narrative strands, one in normal chronological sequence, the other one reversed, putting us in Leonard’s shoes: we never know what went before, just like he can’t remember. It’s a structural strategy that’s also highly effective, and moving, in Eternal Sunshine of the Spotless Mind and in Harold Pinter’s play Betrayal. (I’ve just read that there’s a Seinfeld episode, “The Betrayal”, that has the same structure and makes multiple references to Pinter – gotta see that one!) The focus is shifted from “What happens next?” to “Why did this happen?” I wouldn’t necessarily want my Die Hard or Aliens told in reverse chronology, of course, but every so often I get tired of “What happens next?” – mainly because what happens next isn’t all that exciting.

P.S.: It’ll be interesting to see what sort of visitors the tag list will bring in. Welcome, one and all! Even Britney Spears fans! And aliens, I guess.