I’ve admitted this before: I watch Grey’s Anatomy. And here comes an even bigger admission: no, I don’t just watch it because my girlfriend does. In fact, I like it – or rather, I used to like it. I liked the characters, especially Bailey and Christina.

Throughout the third season, though, I’ve started to find several of the characters kickable. In some cases that’s because they’re snivelling, self-righteous idiots. Which is fine, really; I don’t need everyone in the series I watch to be 100% likeable. I’d even say that series that try to make their characters too likeable will quickly become insipid. 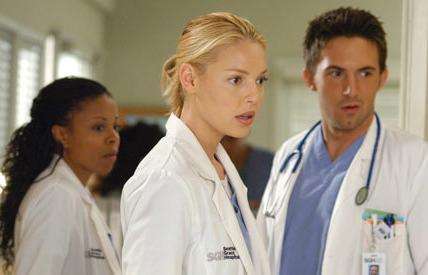 What I mind, though, is how some characters have been reduced more and more to one-dimensional cardboard cutouts of their former selves. The worst offender in that respect is Izzie. She’s never been the most complex character – but within the confines of the genre of medical soap, she had some depth and even genuine tragedy.

Lately, though, her character has been reduced to one thing, and one thing only: pining for George. I don’t mind her pining, but I very much mind this being her only characteristic. (And no, saving Bambi does not make her a fuller, more interesting character.) Some actors can pull off two-dimensionality well and even make it into something more interesting – Bailey isn’t a cool character to watch because her writing is so much more complex, but Chandra Wilson turns the scripts into a living, breathing human being. When her material is good, Katherine Heigl does well, but with the sheer insipidity that she’s been given throughout the last ten episodes or so Izzie is becoming more and more ridiculous and unbelievable as a character.